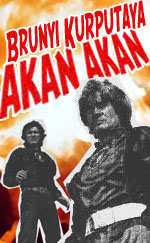 Genre: Action / Adventure / Police (more)
Tagline: A bad new drug... The death catch up with them!
Plot Outline: A police detective must foil a ring of ninja bandits attempting to put a new "super drug"("NEYCATI") on the streets& (more) (view trailer)

Don Man Mankind: Observe, Horce: with the power of my mind, I can...
Horce: Clearly it cannot be true! The stone is moving! (more)