As a parent, I realize that any sentence beginning with "as a parent" is full of crap. So are these products. They'll kill your child, or someone else's. Likely someone else's. Because, let's be honest, you aren't doing anything with those organs hanging out in your pants. Your parents will spend their last days contemplating the end of their family line while you're online typing "Fuck having kids! I have so much disposable income! I can buy a next-generation console and that's way better than a crotchspawn!" A smaller population is better for the earth, though, so let's give these toys a whirl! 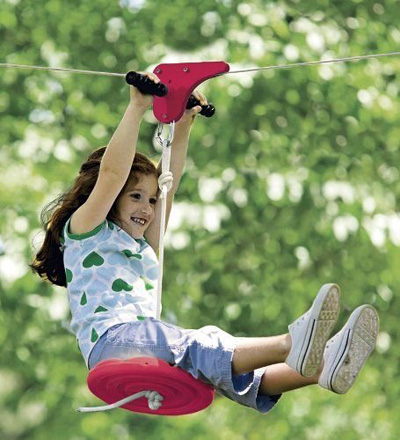 "Turn your backyard into an adventure park!" the manufacturer boasts about their zipline, and it's true. Because people die at adventure parks. They fall, and get mangled, and die. "Gradual stop [...] when properly installed," the manufacturer says, but when has that been a concern in our big dumb country? Nothing is properly installed, nothing works and nobody is happy. Shooting down a thin steel cable at sixty miles per hour is our birthright as Americans. Our economy didn't have no gradual stop and we ain't gonna neither! These colors don't run! 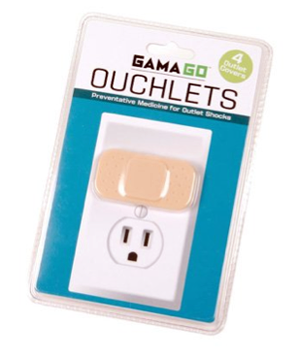 "Ouchlets" are a more covert way to murder children, because you can pretend it's their fault. Kids love band-aids. They'll pretend they got hurt just to get you to dig around in the medicine cabinet and give them a band-aid. They are obsessed with having band-aids, and with peeling them off. So why not cover your electrical outlets with band-aids? Surely kids won't take a sudden and intense interest in the electrical outlets once there's a band-aid covering them! If you put band-aids on your electrical outlets, you are telling your kids "These are for you."

The pogo stick is a classic child-injuring device that's been popular since the 1950s. When it comes to self-harm potential, It's hard to beat a contraption that launches kids into the air over concrete. Yet, somehow, in the age of helicopter parents and rubber playgrounds, the pogo stick survives as a trusted toy. Check out this 3-star review from a guy who described his son's pogo experience as "laying in a pool of blood, screaming." Three stars. Out of five. Laying in a pool of blood, screaming. 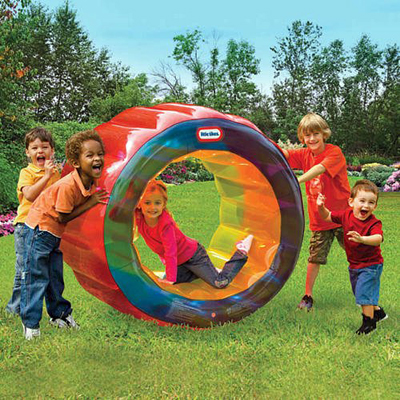 Is the pogo stick too subtle of a means for you, insane parent? Do you crave a more direct method of Lord Of The Flies-ing one or more of your kids? Then I'd suggest the Little Tikes Bumper Wheel. The intent of this is to load a kid into the middle and push them down a hill. Not a big kid. A little kid. It's not called Teenage Tikes. It's called Little Tikes. Get in the bumper wheel, Piggy. Sucks to your ass-mar.

So where does that leave us, after these hellish visions of helpless children being hurt and possibly suffering the ultimate fate? Rubie's Costume Company has taken the worst of our fears and made it concrete: The child's coffin! Features include "lightweight." After what I'm guessing to be complaints, the manufacturer photoshopped out the smiling child standing next to his coffin, but I've included the original picture above for the sake of posterity.

In closing, if you are a parent, take this compilation of awful things as a cautionary anti-shopping guide, lest you end up on Nancy Grace. "Where are the parents???" she'll scream, slapping #PogoMom, #BabyElectrocutioner, or some other hashtag after your name. You don't wanna be that hashtag.