Living the Life at the Magic Beach House

Nerds and sports don't mix. It's one of the fundamental rules of the universe just like gravity, death, taxes and taxes on gravity and death. But that sure hasn't stopped people from trying to merge the two throughout the ages!

Take, for example, the Pythagorean Games of Ancient Greece where athletes would get naked, grease up their Adonis-like bodies and then calculate angles, the Super Science Bowl of 1977 where instead of a pigskin, players threw around a beaker full of smallpox, or perhaps the most spectacular failure of them all: the Magic: The Gathering Pro Tour.

What follows is a fascinating behind-the-scenes expose on the lives of nerds who spend thousands of dollars on pieces of paper with elves and fairies and shit printed on them. Warning: if button-down shirts or a criminal lack of self-awareness offends you, this video may not be for you! 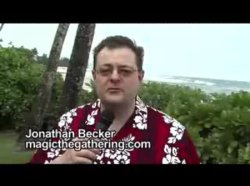 53 years of regret packed into $12.99 of polyester.We begin our odyssey as host Jonathan Becker, looking like he'd rather be anywhere in the world including the bottom of the Marianas Trench and ground zero during the eruption of Mt. Vesuvius, welcomes us to the Magic: The Gathering Pro Tour!

Also, his shirt welcomes my brain to it's first epileptic seizure in nearly a decade. Thanks a lot, jerk!

It seems there's to be a change of plans this year however! Rather than the icy and desolate wastelands of Chicago, Jon is coming at us LIVE from the warm shores of Honolulu! And it looks like the competition is really "heating up" this year! Hahaha!

Jon shows us the fabulous Beach House, where 12 nerds from 8 or 9 countries have been living for a month to play a game most of them should've outgrown sometime during the Clinton administration. The idea, as you may have guessed, is that a bunch of social pariahs descend on a beach house in the middle of a tropical paradise so that they can sit inside all day and play a fantasy card game for FABULOUS PRIZES which generally amount to more cards, gold-plated cards and/or gold-plated books to hold their cards in.

His first victim is Sam. Sam gets a lot of on air time, more than any of the others, due in part to having a wacky Australian accent and being slightly less embarrassing than the rest of his house mates, which in this situation is akin to saying that Santa Claus is better because he's slightly less imaginary than the Tooth Fairy. 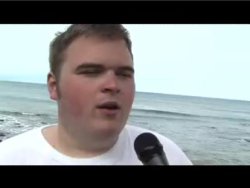 From Sam, we meet the other housemates, each of which is somehow more embarrassing than the last. In fact, this video is really an interesting cross-section of Nerd Culture as a whole: you have the fat failure who openly mocks the idea of exercise, the weird gangly guy that you probably threw rocks at in school who proudly proclaims that Magic "is the best thing that's ever happened to me", and the guy who is pretty normal acting but is just so awkward looking that he had no other choice in life but to watch Star Trek and eat Pocky.

While it's easy to laugh at fat nerds traveling half way around the world to play a card game, the real high point of this video is much more subtle than that. You see, at one point, the camera briefly pans down to reveal several unused surf boards stashed unceremoniously under the house and then pans up to reveal a group of nerds eagerly playing a round of Magic as Jon wraps thing up by saying that the Pro Tour gives you a once in a lifetime experience: hanging out with friends.

Fuck The Real World, I'm calling MTV to pitch this idea for a show: 12 nerds, one house, no Sliver decks. It doesn't get much realer than this.

"is that one of thier moms houses?"
- utubeisthetruth