As many of you know, I routinely plumb the depths of Youtube for all sorts of dark, evil, forboding stuff that would, like, SO totally piss off my parents. Things like "Marilyn Manson driving a car but the car consists entirely of the bones of unbaptized babies that he painted black because that is a very goth color and also instead of gasoline it runs on blood but I mean literal blood not the blood of our soldiers dying for oil which is what regular gasoline is made from".

Imagine my delight when I found a video so dark, so evil, so down right spooky that merely seeing it as a search result drained all the color from my face, which is nearly translucent as it is since I don't go out much during the day because that's when the jocks that beat me up for not being a conformist pig like they are walk the streets.

Anyway, onto the video! 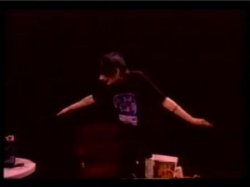 Lord Lankey shows us exactly how much self-esteem he lost during the making of this video.

Our master of ceremonies enters. His job: to serve as our guide on this twisted journey of terror or atleast I'm guessing that's what happens because you can't see shit because someone apparently left their Dracula cape that they found in clearance for 99 cents after Halloween draped across the camera lense.

Eventually, someone remembers that they actually had enough money from their night shift job at Taco Bell to pay the electric bill this month, and the lights come flooding on. Undaunted by the scorching heat of fluorescent light on lily white skin, he welcomes us to the "hell ride murder ride from hell" all the while shuffling a deck of what appears to be Magic: The Gathering cards.

Finally, our third player in this divine tragedy takes the stage: Lord Lankey von Greasestein: Slayer of the Innocent, Lord of Nightmares, Raider of his Mother's Makeup Cabinet, adorned in his finest Slipknot shirt and temporary tattoos. And are we in for a treat! It seems his dark majesty has written a poem and we are privy to his first performance!

He begins hesitantly reciting his poem about corpses or vampires or how much he hates Christians and high school or some shit. Honestly, I was too fascinated with the way he was "gothing up" his sentences to pay much attention. For those of you not in the know, "gothing up" a sentence is when you take a normal sentence, over-dramatize the fuck out of it, and then say it half an octave lower than your speaking voice. So, "Mom, please pass the potatos" becomes "Mommmmmm.... *inhales sharply* PLEASE... pass.... the potatosssssssssss."

"Is that it? Where's the rest?", interjects Lady Obeseia, either refering to a slightly longer awkward pause than usual, or sensing that her bag of chips is nearly empty."I paused, there's a pause in it" he manages to mutter, all the while trying as hard as he can to refrain from undressing the Dark Lady with his opaque contact-covered eyes. 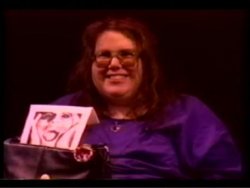 The staff wishes to appologize for any lighting problems Lady Obeseia's event horizon may have caused.

"OOOOOohhhhh. Pawssss......" she coos, while simultaneously missing the point and batting at the air which proves so horribly awkward and terrifying that even our poet laureate wonders what his life would've been like if he hadn't blown off football practice to go LARPing. "Things could have been different", he wistfully ponders for a moment, while turning away in complete embarassed horror, "No. I've come this far. I have to see it through". And with that, he returns to his poem, though still clearly shaken.

But alas, the damage has been done to Lord Lankey's paper-thin ego: He stumbles and rushes through through lines about rotting eyeballs and maggots like a fish that just realized it's on dry land and can no longer breathe. He struggles to regain his pacing and momentum, but the moment is gone. Finishing rather unceremoniously, he gives a self-aware bow and our Night of Gothik Horror draws to a close, though Lord Lankey's is just beginning: Lady Obeseia is in the mood and it is his vampyrly duty to satisy her.

"I'd really like to hang out with this jolly fellow. I'd be a way better friend to him than that fat lady. Poets are underappreciated today. I hope buddy is not suicided."
- MothManEatsOwnHead

"This is painfully, incredibly real."
- algabal