If you spend practically any amount of time on the internet, you'll notice that certain groups of people are more prone to ridicule than others. It's a lot easier for me to make fun of, say, goths than the International Association of Fire Fighters. That's not to say I don't wish goths would start running into burning buildings, though. 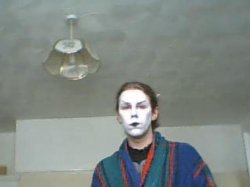 HULK HOGAN, I'M COMIN' FOR YOUR TITLE AT WRESTLEMANIA

As easy as they are to mock, I almost didn't include this video in the update. My initial thought was "We already had one goth video, so two would surely be overkill, right?" But the more I watched it, the more drawn to it I was much in the way that flies are attracted to large piles of shit.

It begins harmlessly enough, showing what appears to be professional wrestler Sting, adorned in his finest bath robe, sashaying over to his webcam, ready to cut an awesome interview where he will no doubt talk about winning the title and jumping off the top turnbuckle.

Things take a turn for the horrible, however, when this pasty charlatan opens his mouth.

At this point, I had to pause the video. There was no point in continuing if I didn't have a word to describe exactly how this guy talks. If the Earth is destroyed tomorrow and all that's left are cockroaches, this video and my review of it, I want whatever group of nomadic humans that find this first to be prepared so they wouldn't make the same mistakes rebuilding mankind this time around. After several minutes, I had it: "nerd". He "nerds" things.

"Konichiwa, stupid gaijen" he nerds, in an accent so terrible and racist that I honestly began wishing that it'd been Japan that dropped the bomb on us, instead of the other way around. "Would you like some tea? Maybe I count to 10 for you in Cantonese", he continues proving that he not only fell out of the ugly tree and hit every branch on the way down, but the injuries resulted in severe brain damage.

"Maybe you want me make you laugh?" Mission accomplished, my friend! 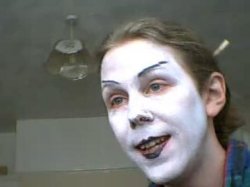 I honestly can't think up a caption that could possibly make this any funnier.This video honestly makes me uncomfortable to watch. I don't know what it is, particularly. On the surface, it's just another horribly shot webcam video some idiot made. I guess I just lack whatever part of my brain is needed to properly understand why a 20-something nerdball like this would wake up one day and think "Gee whillikers! What a beautiful day! I think I'm going to smear a shitload of grease paint all over my face and talk in the worst accent I can possibly come up with. No, no, wait. This isn't quite the perfect plan yet... WAIT! I have it! I'll MAKE A VIDEO OF IT AND PUT IT ON THE INTERNET! Yes, my plan is foolproof!"

To any alien archaeologists that happen to find this video while sifting through the charred remains of our once great civilization, don't worry: us blowing ourselves up was definitely for the best.

"i'm surprised this hasn't gone viral with a slew of haters yet. very... strange."
-lavkian

"I am pissed by this video. Honestly, aren't you a bit of a 'gaijin' yourself? I mean the entire word was meant to scorn and insult foreigners, such as, at one point us stupid, silly Americans. Anywho, I can count to 10 in Vietnamese, easy. This didn't make me laugh. This made me angry. I'll apologize if you want, but that's my opinion. Silly ngooui guoc! "
-Runescape12345