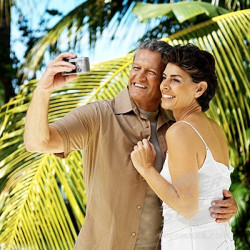 "Oh shit! I didn't know you people had electricity or houses! I thought you lived in trees and were an island!"

Overheard on the train in Calgary during the Stampede: "I didn't like Banff very much; The mountains are too 'in-your-face'."

I guess this came as a surprise to these folks when they visited this mountain town known as a destination for many mountain sports due to its close proximity to mountains.

"Ooooh!! Go next to the bear, honey! I want to take your picture with it!"

You know, looking back on it, I wish I didn't intervene.

American lady standing in front of a 12th-century Norman cathedral in the south of England:

I have heard comments from American tourists about how good it is that they built Edinburgh Castle right next to the train station.

I was hanging out at a hotel here in Vegas when the NFR (National Finals Rodeo) was in town. The whole city is loaded with rednecks for about a week in the beginning of every December. I was walking into a bathroom when an older gentleman in full cowboy gear was walking out. His thumbs were in his belt and he turns to his other cowboy buddy and says this classic:

For anyone who needs clarification, the "wall toilet" was a urinal, and it knew he was "done pissin" because it had an automatic flush sensor.