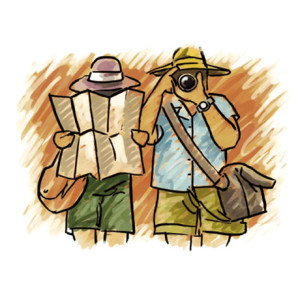 A moment of wonder at Tintagel Castle in Cornwall, UK; a worryingly stereotypical American tourist telling another to "look Arthurian" while posing for a photo. I'm really not sure King Arthur wore lurid shirts, khaki shorts and sock-sandals, or weighed more than a refrigerator. The same pair were later spotted in the cafe, declaring how "quaint" it was that there were brownies.

Just to balance out all the anti-tourist stuff, sometimes the tourist is not the stupid one.

I was buying something in Disney World and the guy behind the counter asked me if I was British. I replied that I was and he immediately asked me if I lived in London (fairly standard). I said no, that I actually lived about 100 miles east of London. Somehow he took this to mean "why yes I am, please talk to me at length about the London Olympics while I desperately try to escape".

I used to stay in Stirling, Scotland, home of the Wallace Monument, a giant phallic tower dedicated to William Wallace. Just after the film Braveheart came out, the Scottish heritage board decided that it was time to update the statue of Wallace that stood outside the gate to the tower, to make it look more like Mel Gibson. Whilst the locals protested at the blatant cash in the board said that the change would not have any negative effect upon how people viewed our country's history.

A few weeks after it was unveiled I was up at the monument as a bus load of American tourists came in. I couldn't believe what I overheard. 'The casting on the film was fantastic! Mel Gibson looks exactly like William Wallace!'

I just had my passport stamped DESTINATION: FUN because I just had a hell of a time reading these tales of brainless globetrotters. Thanks to the forum goons for giving me the ride of my life. The Comedy Goldmine will be back next Tuesday with more interesting and amusing content to broaden your horizons while you wait for your anime to finish downloading. Only a fool would dare to miss it!