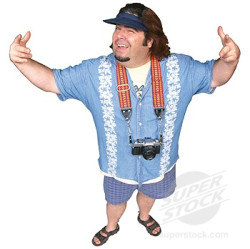 When I lived in Alaska, I worked for a bank. I would often get tourists asking me, in all earnestness, if we took 'American money'.

Now I wish I would have exchanged their cash for the nuts and bark they so obviously were expecting.

I'm an American living in Edinburgh, and I never run out of reasons to be ashamed of where I'm from. Keep in mind, Edinburgh is a city one of the UK's largest castles right in the middle of it. I once witnessed an American lady point at the castle and ask if they took it down when the festival season was over.

"Do they turn off the Falls at night?"

By a GERMAN tourist, somewhere in France.

A friend of a friend working at a Viking museum in Oslo, Norway was approached by a fat old American woman, who wondered if Norwegians had as much trouble with the Vikings as they did back home with the Indians.

"Do you accept American dollars here?"

Said by an American middle aged woman in a store in Old Town, Stockholm.