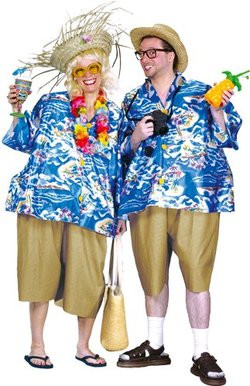 I live right near Windsor (England), where the Queen lives occasionally. The castle's outer wall has the pavement curving right round it at various points, so as you walk up the hill you can run your hand alongside it.

I once heard an American woman tell her daughter (In a scary loud NY accent):

"Oh that's not the real castle honey. That's a replica for the tourists to feel."

Not everywhere has the same amount of money as Disney land for building fake historical walls to grope.

I was on a moving semi-submersible and an American woman looking out the window at the fish swimming around a large coral reef says loud enough for the everyone to hear "Wow, it's like we're under the water!". I don't know what this woman thought was happening when climbing into a large submarine looking thing and descending a staircase to look at fish and coral.

Once I went with some friends to a gorge for swimming. There was an American man, really fat (gut drooping over his belt) wearing sandals with socks and an akubra hat. He was making an enormous fuss, yelling at people to stand back and for parents to make sure they're holding their children's hands and going as far as to physically pushing people away from one part of the pathway. All because there was a little green tree snake, body no thicker than a pencil, chilling out on a tree branch a few metres from the pathway. These things aren't venomous and don't even have teeth big enough to bite you with.

I was in backwoods Canada with my scout troop and was confused by the exchange rates. Trying to figure out what the hell was going on I asked the woman at the trading post what was probably the dumbest thing I've ever asked:

I was part of a tour group in Europe about 10 years ago, and I don't remember a lot of details, but there was one person in our group that was dumb as a brick. We were all American and were together basically all day for 2 weeks. When we made it to Venice, we were being shown some church of some sort that apparently took 500 years to complete. The woman asked "How did they know it was finished? Hadn't the original architects died? Who told them they were done?" Come the fuck on.

I got to chatting with a guy from Texas in the customs line in Japan and when I told him I was from Australia he said "Wow, you speak such good English."

My wife did a couple of months archaeological fieldwork on one of the Brochs on the Shetland Isles, unearthing constructions around 2000 years old. The site was only a few hundred yards from the more recent addition of an airfield, and is open as a tourist attraction for funding reasons.

The Archaeology students have to put up with a lot of dumb crap, but the comment that stuck in my head was when she wrote to tell me she had been asked why the ancient stone buildings had been built so close to the airport - "It must have been kind of noisy".