To save on my utility bill, I'll normally piss like four or five times before I flush the toilet. I won't let it stew overnight though. I forgot to flush one night when I was about to go to sleep and the next morning when I walked into the bathroom to have a tinkle the ammonia smell about knocked me over.

I've tried doing this with poop as well but that's a little much, even for a gentleman such as myself.

I used to rent out a friend of mine's dad's unfinished guest house. I used an ironing board as a table and I didn't have a real toilet, only a "camping toilet," aka Poop Suitcase or Poopcase. When it got full I'd have to go into the back yard to dump it and hose it out.

Over the course of the four months I lived there my poop, liquified by a chemical made specifically for poop suitcases, effectively killed such a large amount of undergrowth around the tree nearest the cabin that my landlord thanked me for pitching in with yard work. 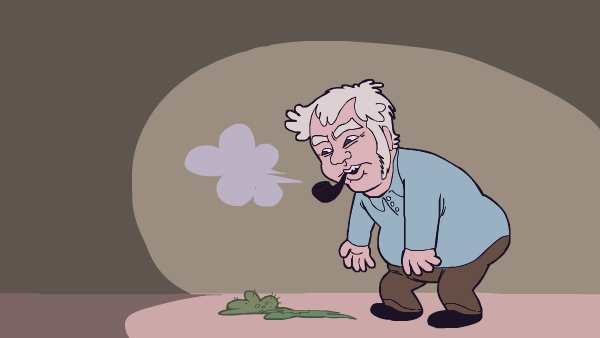 Piss AND spit in bathtub? Even if you run the shower for a second to wash that shit out, it's probably less water than a toilet flush, unless your house has those goddamned sissy low-flow toilets.

I may be a lazy bachelor but I still have some standards. Only time I will pee in the shower is if I am taking a shower.

Does anyone else piss on their feet in the shower? I feel like it keeps athletes foot away and makes my toenails extra creamy looking.

Well, I was sitting in my fairly disgusting bath tub the other day having a beer (just Magic Hat, nothing very cool) and my dog barged into the bathroom to see what was the matter. I thought I had closed the door completely to prevent this sort of thing since my dog is crazy, but I guess my house is slowly starting to fall sideways so the doors won't close. Anyway, the damn dog startled me so much I jumped up, flung my beer into the toilet and let out a really loud "hnnngggggghhh" which in turn sent the dog barreling down the hallway, knocking over one of my shelves. Needless to say the beer actually landed sort of upright in the toilet water with the opening still in the clear, so with one foot still in the tub I reached over and grabbed it, I figured there was no harm in getting some toilet water on the bottle.

After a few more sips I realized I had pissed a few times in the toilet and did not flush it, you know conservation and all that (since I was reaching over from the tub I didn't notice the color of the water). I was a bit disgusted with myself for a minute, but then went back to drinking the beer. Blech.

I'm married and I pee in the sink almost all the time, I don't know why I do that still, maybe I'm saving a few bucks here and there by not flushing the toilets 15 times a day.

I have two toilets in my apartment and I never use one of them so I decided how long I could piss in one without flushing it. 6 days and I couldn't stand being in there anymore. Even clear piss smells horrible when it breaks down.

I've lately taken to peeing out the window late at night instead of actually getting up and leaving my room. Why not, there is a tree right out there.

Besides, I'd just end up taking a leak in the sink and as we've just found out that does tend to get rather odoriferous without proper rinsing which obviously is noisy.

I've often had a beer while taking a piss and it feels like the beer is flowing straight through me, it's kind of weird and cool.