The King of Swag

I own and sleep in a bunkbed for no other reason than bunkbeds are bachelor as fuck. They can be a double bed, a double table, or a table-bed, and you can easily tape up comforters all around the sides so you can sleep it utter darkness regardless how late in the fucking afternoon it is. Totally the swiss-army knife of beds.

The first place I moved into after college was with two other dudes. It was a 3 bed/2 bath place, and it must have had six or seven different couches. I guess previous roommates brought their own couches and then left them behind when they moved out, so they just accumulated there. In any case, I brought a couch as well and that put us over the threshhold - we had no more room for couches. So instead of throwing one out, we went to home depot and bought some wood and drills, and built a sturdy platform. We put the platform above one couch and put my couch on the platform.

It was a bunk couch. It was glorious and I wish I got pictures of it before it broke and collapsed onto the bottom couch. Fortunately nobody was sitting on the bottom couch when it happened or they most certainly would have been killed.

I sleep on the floor, on a U-Haul furniture mat (basically a 6'x6' scrap of felt) that I acquired in college.

Everything I own fits in the back of my car; I'm almost thirty. 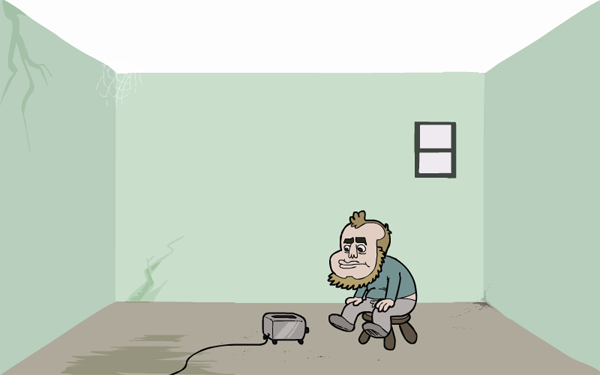 Almost all my furniture is second hand, either acquired through garbage picking or a variation of "Here you can have this just get it out of my house!"

I've been moving a lot recently and have found that instead of buying nice and heavy furniture I just donate/give away cheap coffee tables and lamps then buy "new" ones at Goodwill. It's like a movable storage unit without monthly fees that costs $5-$20 to access each time I need a new table or chair.

I only own 3 pieces of furniture, all of them bought in the camping section of a Sportsman's Warehouse. A hammock, folding table, and folding camp chair are good enough, dammit

It sounds awful, and if you add too much you get a kind of oil separation thing going on, but you mix that shit right and it's gold. Makes cheap beer taste like good beer. Makes good beer taste a bit interesting.

for breakfast I had a can of peaches, and ate them with a chopstick because I didn't want to cook or wash dishes.

I've eaten Vienna sausages out of the can using a small flat head screwdriver for the same reason.

chopsticks are awesome, but why buy them? I'm sure you have some pencils around.

I like to buy broccoli and brussel sprouts and pretend I'm a giant eating whole trees and whole cabbages. I often make meatloaf villages to drown in a great BBQ sauce flood and devour FOR I AM THE ALMIGHTY CREATOR OF THEIR WORLD.

Had a fairly bachelor dinner. Work had been really shit today, so I wanted to de-stress. What helps me destress is horrible cheap unhealthy food. In this case a cheap supermarket pork pie. I have a good job, and could have afforded a nice pork pie, but that would defeat the point somehow. Of course, being a classy bachelor, I was drinking an amaretto sour along with my pork pie.