It takes a great deal of bravery to breach the "Beyond" barrier, so before attempting it, read through Lil Cunty's pep-talk posts from her BYOB thread "Don't Be A Coward." (She made the collage, too!) 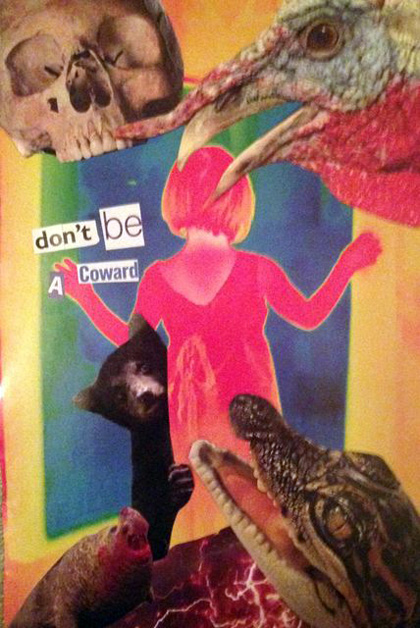 A man walks back and forth in front of a bank. He's pale and thin and nervous and he's been there all day. Sweat beads on his lip, a twitch comes and goes in his right eye. the outline of a ski mask can almost be seen in his pocket. I walk up next to him, pretending to look for something in my purse. "Don't be a coward," I mutter as I pluck a crumpled tissue from its depths. "You've got this. I believe in you."

A little boy finds a rock. It's sharp and heavy and just fits in his hand. A sunbeam hits his face, farm-fed innocence under unruly blond curls, reflected off the dirty panes of the abandoned house at the end of the block. He looks at the rock, the dusty glass, the rock. "You there!" I snap as I walk by. "Don't be a coward. You know you want to. Just do it!"

A mouse peers out of her hole. Generations of her people have lived in these walls, avoiding old wiring and springtraps, learning from the discovered corpses of those who didn't. Her delicate nose twitches. She can smell a cat. It twitches again. Is it two yards away, or three? The distance is the difference between leaving her hole, between finding food for her family, between life and death.

The beautiful creature who looked like a man but was not a man was dressed in linen, with a belt of fine gold from Uphaz around his waist. His body was like topaz, his face like lightning, his eyes like flaming torches, his arms and legs like the gleam of burnished bronze, and his voice like the sound of a multitude. He sat outside the throne room, which was more like a galaxy than a room, and he doubted. Perhaps he should do nothing, say nothing.

A thousand trumpets sounded softly and a not-unpleasant voice that came from everywhere and nowhere said, "THE LORD will hold audience with The Morning Star." Improbable doors swung open. The angel hesitated. There was still time to flee, to forget. I placed a small stone tablet in his perfect hand. He looked down and mouthed the words chiseled into its face: DONT BE A COWARD LVCIFER 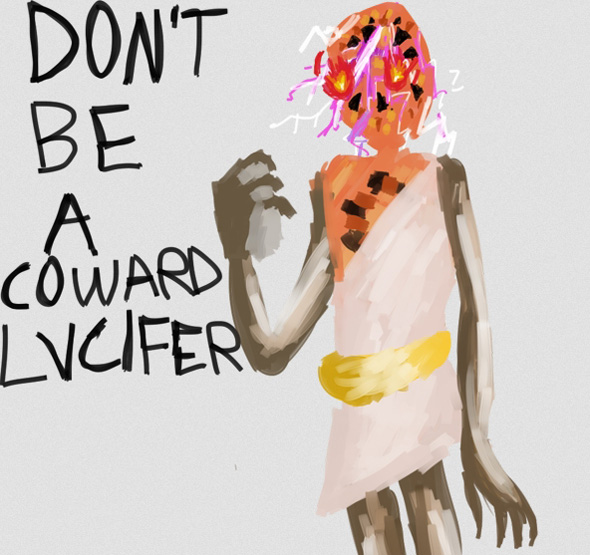 Thanks to GODSPEED JOHN GLENN and Lil Cunty for the thought-provoking posts and topics!