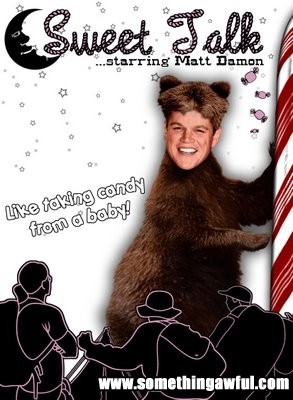 Mike, Josh and Benito are three campers that just can't seem to get enough candy! But when their big stash is stolen by a greedy human grizzly bear, they are forced to engage in series after series of time-consuming negotiations with it in order to reclaim their precious treats. This March, Matt Damon give us a little bit of... Sweet Talk!

When two burn-out grad students are unexpectedly drafted into the US Air Force, logic is going to go AWOL! Watch as their stoner hijinks shake up the buttoned-down world of the United States Military! Ashton Kutcher and Pauly Shore star in High Flyin'!

In the year 1996 the U.S. government transformed a small pacific island into a home for those who have none. The homeless population was secretly relocated to this island, named HOBO-1 and left to their own devices. Seven years later, when during a routine flight the President of the U.S.'s plane goes down on hobo island, it's up to Special Agent Max Eastwood to retrieve him from this forbidden area. Max soon discovers that years of isolation have changes the Hobos into something more than human... and thirsty for blood. Will Max find the President in time and escape the island alive? 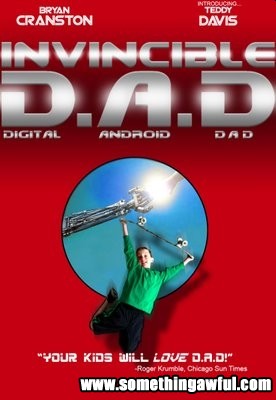 It was just about that time of year for the father-son competition when Taylor's do-it-yourself handyman dad (Bryan Cranston) became bedridden with a life-threatening illness. As a final gift for his son, the craftsman made something to live in his memory... a cyber-optic copy-dad made from pure titanium! Taylor's new Invincible D.A.D. (Digital Android D.A.D.) seems to be able to do anything... Built with special pizza-ordering mechanisms, a morphing body for in-town skateboarding and best of all... he's invincible! Taylor and his new D.A.D. are set to ace the competition! But will he see the value and his flesh-and-blood father before it's too late, or will D.A.D. win him over for good? Watch as Bryan Cranston finds his way into your heart, and mine... in Invincible D.A.D.