I built a cardboard office around my neighbor's cube: 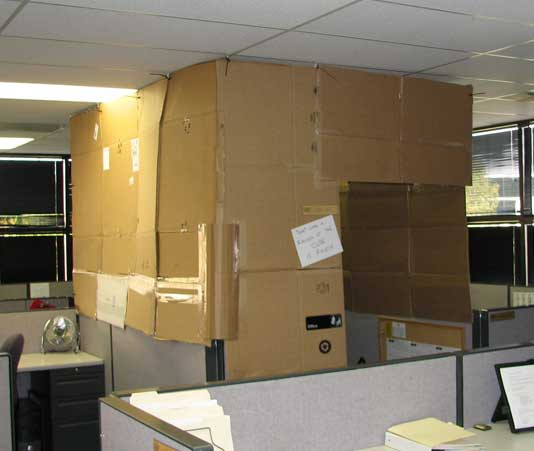 Facilities didn't like that I suspended it from the false ceiling, but everyone else got a kick out of it.

Also gave one of the Support guys a tent: 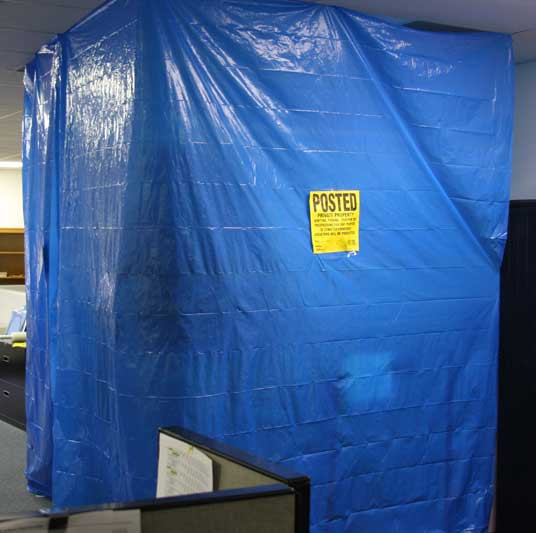 And then trashed the inside: 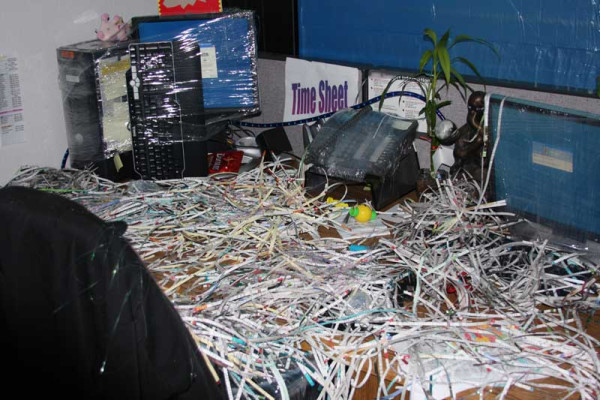 Working in a deli sub shop I saw people pull the old ketchup packet in the deli slicer thing a few times. They're slicing a thing of turkey or something, quickly slip the ketchup packet into the blade to slice it open, making it look like they've sliced their hand, then let the ketchup drip all down their wrist while appropriately screaming "Oh god, my finger! Oh god!" and holding their index finger bent in the middle, ketchup all over it, and showing the kitchen the back of their hand.

First time I had this done to me, I panicked and slipped and fell flat on my face trying to rush for the First Aid kit, and was made fun of for a while. After a few months it became pretty routine, trick the newbie, "Oh god my finger!" and all that, and I'd roll my eyes, until my co-worker, E. did it for real one day (sliced his pointer finger about 1/3 of the way into the top knuckle.)

Needless to say, after that incident there were no more deli slicer shenanigans in our store.

I've had several factory jobs over the years, and they are the absolute best places to pull pranks in my opinion.

We always pulled another prank on the new guys. We would tell them a couple things, pretty much to gauge how dumb they were. The first was, that our supervisor needed a steam sample. "Well, how do I get that?" they would ask.

We would tell them to grab a clear garbage bag, wrap it around a steam wand, and fill it up, then tie it shut. Then write the date, time, and their name on the bag and set it in the supervisors office. Of course, they would do it. The supervisor got such a kick out of it, that he hung them up on the wall in the boiler room.

The other thing we would tell them, was that we needed them to run to supply and get a couple cans of steam, because we were running low. Of course, all of them did it. I swear I worked with the most gullible people ever.

I work for an electronics liquidator down in Quality Assurance. Basically I look at the item, make sure it's clean, make sure it looks good, and make sure it's packaged well and ready to ship. Part of this includes making sure it's safe to ship and won't shuffle around too much.

So one night we get a big shipment of expensive laptops. I just so happen to get a similar laptop that's non-functional. I mean this fucker was completely ripped apart and gutted, all that was left was the shell. (so all I have to do is package it, I get to skip 90 percent of the work of a normal item) I take the thing, close it so it looks like one of the real, expensive laptops, walk up to my boss, and just scream "I'VE FUCKING HAD IT WITH THESE LAPTOPS!" and throw the thing on the floor.

The look on his face is a priceless mixture of shock, fear, and anger. Then he looks at it in more detail and sees that it's just the shell and becomes a bit more relieved.

Everyone around was laughing their heads off and my boss ended up crying tears of joy/relief.

When I worked at a blood bank, I poured fake blood all over the cement by the back door where all the smokers would hang out. People on the night shift thought someone had been murdered and they called the police who showed up to investigate.

At work, I wrote on a blank sheet of paper, "DO NOT DISCARD THIS SHEET" and left it in the coffee room. It didn't get thrown out for about a week and a half.

I have to tell you all The Funnel Trick.

Have your victim place a funnel in their pants (dead center where the belt buckle is) and tell them that if they can drop a quarter from their forehead into the funnel, you'll give them ten dollars. While the quarter is on their head and their head is tilted back, pour ice cold water into the funnel. Gravy works great too. Just make sure it's not TOO hot.

That does it for another week. I just pulled a huge wheelie on my bike as a token of appreciation for all of the Forum Goons who contributed tales for this edition of the Goldmine. If you were the victim of one of these pranks, you can sue and use this article as admission of guilt on the perpetrator’s part. You'll probably be awarded at least half a million dollars. God bless America! Next Tuesday will be a Comedy Goldmine so special I could only describe it using an aggressive form of break-dancing. Make sure to check it out next week!