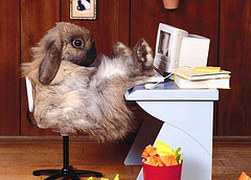 At Applebee's, we used to make the rookie hosts polish the balloons.

I took a co-workers coat and soaked it with water. Then put it in the freezer. When he was close to leaving, we hung it back up where it was. Hard as a rock!

I worked in a factory 2 years ago has an industrial painter and I was pretty much pranked everyday by the older guys there.

A good example of that is when I started they asked me to go to one of the shops (supply place in the factory) and get some "stripped" paint, the white and red one. I took me about 10 minutes and a confused shop worker to realize what they just did, so I came back with red and white paint. The funny thing is, the other student working with me didn't came back for FOUR hours looking for the damn paint, he tried all the shops and even tried to make them ORDER it.

I used to work in a corporate mailroom for a healthcare company while I was transferring schools in college. Everyone on staff had a numeric pager that was used by our supervisors and some co-workers when we were needed somewhere and they couldn't get ahold of us. Since they were numeric, all they displayed was a telephone # or an extension for us to call back ASAP.

Well, my mailroom buddy and I would always page each other with sex chat #'s which was always good for a chuckle. Since we got bored, we decided to play a prank on one of the maintenance guys who also carried a pager. We paged him with 18007392428 which is also known as 1-800-SEX-CHAT. Apparently when he received this page he was in the support staff office which houses the desks of all the support supervisors and the executive in charge of the area. He asked if anybody identified the #, which nobody did, so he decided to dial it on speaker phone since all the people were curious. Apparently he turned 4 shades of red when the porno greeting was heard over the speaker phone in the office.

When I was nineteen (summer of 1996) I interned for a summer with an engineering firm. The custodian was always kind of a dick, but also kind of jumpy, so I decided to have some fun at his expense.

Anyone remember the Command & Conquer screensaver? It had sound. More specifically, the first sound you hear as it starts is a HUGE FUCKING EXPLOSION. Just before I left for the day, I installed it, set the screen saver to go on after an hour, turned the speakers on my workstation all the way up and left.

I got a note from the boss the next day, reading, "Your screen saver made the janitor think there was a nearby explosion. Please change it."

My husband taught a high school biology class, and was famous for having critters and for his practical jokes. Every April 1st he tried to top the year before.

This particular year he got a cardboard tube that was 4" in diameter and ten feet long. He put some pine shavings inside with some left over snake skin from the last shedding in his class, taped window screening on the ends of the tube, and then pulled one end screening out a little bit so it looked like something had pushed it's way out. He filled out a Western Union slip, took the slip that gets attached to a package, and taped it to the cardboard tube. It said: To XXXX High School, care of Mr. XXXX, biology department. Contents: 8' Python; pregnant.

He waited until all the front office staff had gone home for the night, then snuck in and leaned the tube against the receptionist's desk. He walked around and sprinkled shavings and snake skin under all the desks.

The next day, panic ensued. Yeah, it was April 1 and a few people were suspicious, but it looked so legitimate. They called DH's room, and he innocently said, yes, he was expecting a snake for his class. All day long the office staff went back and forth between suspicion and terror.

After school let out, my husband went to the house of a student who had a really big snake, and my husband borrowed it. He draped it over his shoulders and strolled into the front office and cheerily announced: "It's OK, ladies, I found it."

He never did tell them it wasn't legit. They still are wondering, and we are still laughing.