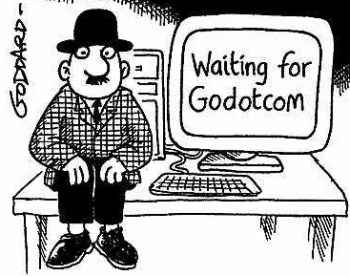 Waiting for Lunchtime by Samuel Beckett aged 10 and 3/4

Enter from opposite sides.

Vlad: It was pudding yesterday.
Estie: It's always the pudding.
Vlad: The main and the pudding. Always the same. [Pause] Can't take a bite of one without tasting the other.
Estie: Too much ginger.
Vlad: Not enough ginger.
Estie: Must we argue?
Vlad: We must. It keeps us going.
Estie: My stomach hurts.
Vlad: Patience! Lunchtime will be upon us soon.
Estie: But when? We've been waiting for days.
Vlad: Days? Years? Countless.
Estie: Countless.
Vlad: Millions.
Estie: Thousands.
Vlad: Ask them again.

The rest, unfortunately, not licensed for release by the author's estate.

Of course my dear friend Brian! But I fear there is only one problem: I know not the rules of the game. Do you know them? For you must in all your knowledge of what is right and true.

Yeah, I know how to play.

Well then by Zues, Brian, please impart such great wisdom upon me! But first I must ask of you one question, a simple one, just in order to clarify something to this old, wretched soul.

Is it so that one and only one clear set of rules exist for the game of four square? Or is it so that there are perhaps different rules applied at different times?

I guess sometimes we change the rules.

Then, if it is such that the rules may change without notice, how is it at all possible that you, albeit wise and learned beyond your years, could teach me the the true rules of the game? Is it possible you yourself do not know the rules to the very game you wish me to play?

Uhhh, I guess so. Look do you want to play or not?

Well my most exalted friend, I would most certainly love to! But I fear I can not without knowing the rules of the game are just.

Perhaps one day we shall finish this conversation! I'm sure there are so many things you could enlighten me about!

My Camp, By Adolf Hitler.

Today my mother sent me to summer camp by the Rhine. It was infested with crooked little children who pored over the mess hall like cockroaches erupting from the chest cavity of a corpse.

One day I will kill them all.