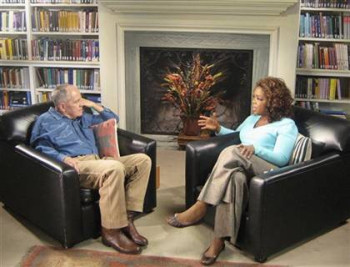 Goofus and Gallant are taken in for a meal by a kindly Mexican woman by Cormac McCarthy, age nine

The woman laid before them a large plate of beans and tortillas and Gallant tore one of the tortillas in half and scooped a pile of beans into it and chewed thoughtfully and thanked he woman for her trouble. Goofus urinated into his hat and when he finished he poured it into a tin cup and told his brother he had made wiener lemonade. Gallant chewed thoughtfully and took a drink of the lemonade and thanked his brother for the trouble.

Maybe the nature of life is in these beans, the woman said. Maybe god hides in the air we breathe and the nourishment we take and we can only see him when it is time for us to stop consuming both.

De acuerdo, Gallant said. Muchas gracias por su dificultad. Goofus didn't respond but instead drew his father's blade over the housecat's throat and sprayed the blood all over his brother's face and told him his pussy was bleeding.

I roll over in my Captain Planet bed sheets; the sweet, melodic sound of my mother's angelic voice is beckoning me to the phone. I crawl out of bed all dreary-eyed and bury a knuckle into my eye socket, shaking loose the early afternoon gossamers. The phone fills my ear with Sandy Glendale's voice, a friend from long ago.

Hearing her voice floods my head with memories of wild, late night parties in her tree house with all of our friends. We'd drink punch the color of rubies and exchange debaucherous tales of comic book heroines. I remember seeing her there killing my soul in them tight, khaki shorts that begged for someone to liberate them from her creamy, white thighs. Neal would be there, too, talking rapidly as usual for a kid off of his adderol. "Yessir, I'd steal me a candy bar an a soda quick as I'd a made her in nothing flat, 'er since I hit puberty." We'd listen to the neighbors, a group of mad, artistic negroes, go to wailin' on their horns. Just listening to the sound of their beebop would make my heart long for the feral women and delicious life of the small Mexico towns I knew from spring break with my Dad last year. Then later, we'd pop "smores" and watch the world around us spiral away as we fell off to a deep sleep. I'd dream of the nothingness and recite the diamond sutra to myself; a wandering bhikku who stumbled upon the vast treasures of a sensual, voracious youth.

The Punishment by Franz Kafka, age 7:

It was a cold, brisk day when K. was sent to sit in the corner. Evidently, someone had been spreading rumors about him, or else he was the victim of some stupid liar, like Carl. He looked up at the teacher imploringly. "If you please," he said, "this really is ridiculous-- it will hardly do at all, you know, to put me in the corner, and besides, I didn't do anything". The teacher merely frowned. He took off his spectacles and polished them with a handkerchief.

"I'm afraid it doesn't matter," the teacher replied. He took a piece of paper out of his desk, examined it closely, and then put it back. "We have extensive information on you, and we know just what you have done!"

"Did too," came back the answer.

"Did too too too too too times a million, and furthermore, we have correspondence backing up our case. You might as well give up you know, and find yourself some good legal counsel for the parent-teacher conference. Happens every time around this year, you know".

K. found himself shivering with terror. "What am I going to do?" he thought. "If only I were back in the second grade! Ah, how happy I was there! And how I miss my old teacher, Mrs. Crabtree! Oh Mrs. Crabtree! If only you were here now, how proud you would be of your student!" K., lost in these reveries, hardly noticed when two teacher's aides, spurred on by a nod, picked him up by the arms and began carrying him towards the chair in the corner, the cruel pointed cap placed and ready. At that moment, an unending stream of students were going to the lunchroom to get their snack.