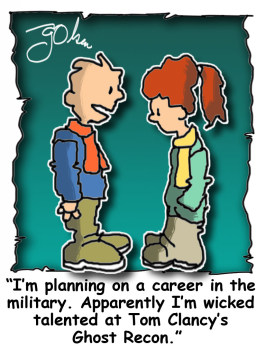 'And so it begins' Manny said to himself. His gang had been on alert since leaving Donny's house on Newport. Jonny's old hound Tugboat had been trailing in their wake, snuffling along streets, right along the curb line and bushes, and right along the sound barrier trees lining the highway. A perfect place for a girl to hide.

The point boy pointed over the tall grasses and shrubs. An old blue shed stood two hundred feet away. They had been following footprints since Arlington Avenue, the fact that the trail was becoming more worn meant there was a constant flow of traffic. Up to now, all they had were a few dusty Keds marks. They had no way of knowing if it was the girls from that Hebrew school, some kids with nothing better to do, or maybe even adults. Manny listened close, and heard a squeaking noise.

"Could be anything." Jonny said, holding on to Tugboat.

"Sure could." Manny agreed. He looked back over the field. Noise could easily bounce off the shrubs, be muffled by grasses. The shed was a rather abrupt stop in their field of view, and only a hundred from that was the overgrown barrier trees.

"If it's a girl, it's pretty far off, I think." Donny said quietly. It was surprising how quiet boys were during girl patrols. As if the girls were right next to them, listening for them.

"Manny." The point boy said after a moment. "Without a good trail through the woods, the girls could be tangled in the shrubs by the dead raccoon we found last week."

"We would hear screaming." Jonny grunted.

"Not if they have Lindsay with them. She's a tomboy. Tried to run with us a few times."

"Lindsay? Doesn't she always talk about how she goes rabbit hunting with her dad?"

Manny nodded. "She's not grossed out like other girls. If it's her and a few from the t-ball team, they could be all the way to the creek culvert by now."

"Any reason to follow?" asked Donny. "Not a lot of fun in teasing Lindsay out here. She's in her element. She'll throw rocks at us. Might even have a potato gun."

"Fair enough. This wont be the last time we'll see her. And at recess, she wont have her t-ball team."

Why I Hit Keira -or- The Seventh Strike by Lemony Snicket

There was a comestible on the table; comestible here meaning "something which has the intended purpose of being consumed for nourishment or refreshment". Whatever you call the comestible in question (Keira called it Juicy Juice), comestibles have a strange manner of evoking feelings of longing, commitment, and, most importantly, envy. For it was when Keira placed the straw at the foil puncture-seal of the beverage that I elucidated upon my desire for the juice contained within; whereas normally elucidated means "to elaborate, describe, or detail", here it is a euphemism for the punch I threw at Keira's head, knocking her quite handily to the floor. It was the beginning of a very bad day for her, and I daresay myself as well. Read on if you dare, and you will find that our stories are sad ones to tell, and may involve me getting time-out - you have been warned.

THE PERSON I MOST ADMIRE by Friedrich Nietzsche (Age 9)

Let it be said that the priests, the writers, the philosophers - those interminable prognosticators of the human condition - proclaim man unmade by strength of his will. Where the will is healthy they find man at his sickest -- they are the deniers of humanity. How servile we find them; how interminable their fervour, how patronising their ramblings... in short, how motherly.

Has there ever been so clear an impediment to the freedom of will (that most vital of forces!) as that of the matriarch? No! In her wake we encounter only broken spirits. She is Artemis, we the stags... what a curious sense of justice she must have!

That we are to clean our rooms: - I say that man is made by the strength of his will -- where the will is denied we find only sickness. When the mothers look unfavourably upon the untidiness of our abode ('untidiness' - such a word as to assuage the senses! Are we not being mocked?) the will begins to assert itself. We should rightly say 'Enough! The room is as it is'! This is the apex of the human soul -- we find ourselves made; our beds unmade.

Enter Zarathustra. (The person I most admire.)