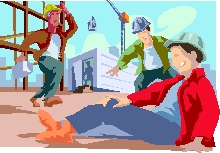 I work at a summer camp, and last year a fellow counsellor (Mark), me, and two kids (Jim and Rob) were playing sorry. Mark finished first, then Jim, then me, and Rob finished last. Rob was upset because he finished last and in an attempt to console him, Mark said, "Hey, everyone's a winner" to which I shout at Rob without missing a beat "except for you!".

The kid started crying and would not stop. My supervisor eventually found out but luckily he thought it was pretty funny, as did Mark so it was no big deal until Rob told his mom. So Rob's mom and dad come into camp the next day and I get bitched at for a good 30 minutes about how children can't be treated like adults by Rob's mom. When she was finished however Robs dad told me he also thought it was funny so I was never punished.

About 6-7 weeks ago I took $3200 in fraudulent money orders and cashed them. I did not check the little "put your thumb here and the symbol will disappear" verifier, nor did I call the 1-800 number to verify that they were, in fact, legit.

They were good fakes with the printing being a little different than usual. I figured since some Wal-Mart receipts have a different look and font that some of our money orders might, as well. I was so very, very wrong.

Luckily, everyone was pretty cool about it and I didn't get fired or written up. I found out just the other day, in fact, that the guy who cashed them was a victim of one of those Nigerian e-mail scams and these money orders were his "payment."

When I worked at Taco Bell years ago, I forgot to give the guy his change back in the drive-thru. He got a chalupa and paid with a $100 bill. Never came back to collect the rest. Oops.

My friend managed to completely delete about £10,000 worth of stock, straight off the database of the DIY store he worked at, and then he ordered some replacement stock.

He didn't get fired but they put him on the night shift moving cement bags.

Once when I worked at a very popular steak restaurant about 5 years back I "accidentally" dropped a steak on the ground when a customer said it wasn't "well done". I just brushed the dirt off and then burned it into oblivion.

The customer didn't even complain.