EXPECTATIONS: I dislike Roland Emmerich's previous works, but something about Anonymous just grabs me the right way. As much as the theory from which it draws its inspiration is mired in classism (that Shakespeare's plays were, in fact, written by the Earl of Oxford), there is some interest to addressing that here. Dramatising a theory like this seems like rather a bold move. I have to admit it: I'm genuinely excited for Anonymous.

REALITY: I think knowing that audiences were prepared to accept the absurdity of 2012 gave Emmerich all the confidence he needed to make Anonymous. "Absurdity" is the order of the day here, and Emmerich is well aware of the fact, taking the most outrageous elements of the theory and just letting them play out without addressing their plausibility. He is not presenting his historical dramatisation as fact, he is simply presenting an argument in a compelling and interesting way. That said, as enjoyable as I found it, I don't think I can sincerely recommend it. 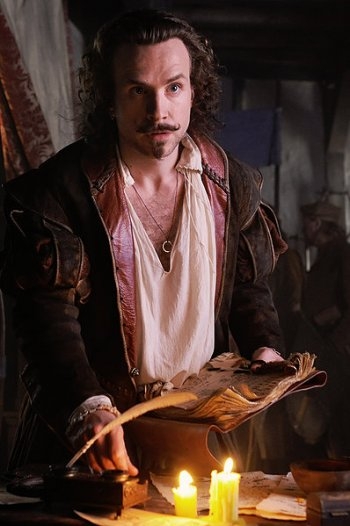 Shakespeare, seen here carelessly holding his latest opus over some lit candles.The film is introduced by old ham Derek Jacobi, who addresses a modern theatre audience about the idea that Shakespeare did not write his plays and was, in fact, a semi-literate wastrel claiming authorship of works of greatness by a repressed nobleman. Now, we've all heard this theory before, and we all know it has to be bollocks, cooked up by people who can't understand how someone as lowly and common as William Shakespeare could possibly have written Hamlet.

In this film, the repressed nobleman in question is Edward de Vere, the Seventeenth Earl of Oxford, as played by Rhys Ifans in his later years and as a young man by Jamie Campbell Bower. Having developed a body of work since his childhood, he asks struggling playwright Ben Johnson (Sebastian Armesto) to put his name to his plays. Johnson refuses and passes the burden to his actor friend Will Shakespeare (Rafe Spall), who is more than happy to take the fame associated with having written anything of such quality

There's a lot going on here: Ben Johnson's jealousy at Shakespeare's success that could have been his; Shakespeare's life of decadence and the possibility that he may be a murderer and blackmailer; the politics of Elizabethan England; the separation of church and state; the matter of rightful royal heirs; and, of course, the idea of authorship only being important to the author (and picketers in Stratford-upon-Avon). The main focus, though, is the relationship between Oxford and Queen Elizabeth (Vanessa Redgrave old, Joely Richardson young).

The idea that Shakespeare's works were actually written by a man who was Queen Elizabeth's lover and also her son will enrage many people, as will the implication that Shakespeare murdered a man who discovered the truth. Anonymous plays up these elements quite well, throwing in some unbelievable time-frames to sweeten the deal: Oxford writes A Midsummer Night's Dream in his childhood and performs it for the queen, as well as putting the finishing touches on King Lear from his death bed. Everyone involved knows that this is going to piss a lot of people off, so they simply allow the less believable elements to pan out without glossing over them, perhaps to draw attention to the fact that little is known of the truth either way.

If anything, I would have liked to have seen more of the thoroughly unlikeable interpretation of Shakespeare that we have here. Rafe Spall plays him with comedic brilliance, making his more villainous acts all the more startling. He is portrayed as a man who gave up his dream of acting to become a charlatan and got lost in wealth and criminality. I get the feeling that there was a longer version of Anonymous that might see the light of day in the future, perhaps as a special "this is really going to piss everyone off" edition Blu-ray. I'd buy it. 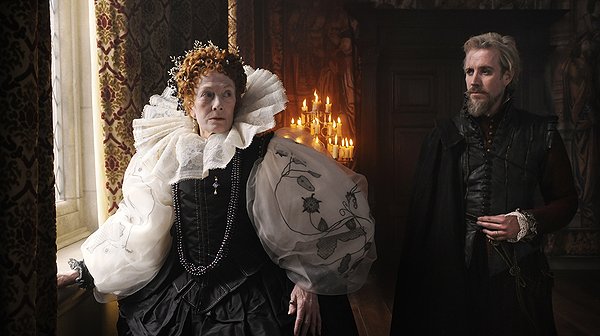 Sizzling sexual chemistry that will make you puke!

Perhaps Emmerich is making assertions on his own status as an artist. Will he be remembered? Maybe not. Maybe he focuses on the Ben Johnson character because he feels he can relate more to the artist of the time who lived in Shakespeare's shadow than he can to Shakespeare himself. Perhaps he feels unworthy of art, or perhaps he ended up in a different walk of life than that of which he dreamed? The point I'm making here is just how much do we know about Roland Emmerich? In a hundred years, will his films stand as proof of his existence? Will his films be remembered at all? The truth is that it doesn't matter. This film may be as culturally irrelevant as it is possible to be, but I think it will stand the test of time, not as a chronicle of historical fact, but as a dramatisation that is no less far-fetched than any of his earlier films.

MINORITY REPORT: I hope the 25th century has debates as stupid and meaningless as the Shakespeare issue. "How do we KNOW that Roland Emmerich made ALL those movies?" - Martin R. "Vargo" Schneider