from Robert "The Rock" Seeders

EXPECTATIONS: It's a kids movie ... starring The Rock ... in a tutu ,,, playing the tooth fairy. Think about that for a minute before you ask me a stupid fucking question like "What do you expect out of this movie?"

What the fuck, man? 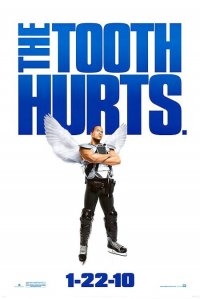 Tooth puns!Hasn't your movie-going audience been good to you over the years? I remember when you were still wrestling and you were about to make your big-screen debut in The Mummy Returns. I paid to see it only to get shafted by what basically amounted to a five minute wordless cameo. Sure, you returned in the third act, but you were all CG. And it wasn't that good, convincing CG like they used in The Curious Case of Benjamin Button, either.

You made up for it later with The Rundown and Walking Tall, and all was forgiven. Sure, those weren't the sharpest movies ever made, but you were playing to your strengths as a burly, handsome tough guy, and that's all we wanted. Hell, you could even make a bad movie watchable. I readily admit you were the only thing I liked about Doom, and I'll even pop in Richard Kelly's incomprehensible Southland Tales just to watch you chew the scenery.

However, I can't help but notice you've been sliding off the piano lately. It started with 2007's The Game Plan, an inoffensive but painfully corny family film. In 2009 we got two lame kid-friendly flicks, Race to Witch Mountain and Planet 51. Now, as we enter the next decade you give us this, The Tooth Fairy? Is this what we have come to? Well, I'm not going to take it any more!

Mr. Johnson... Rocky. This is an intervention.

In The Tooth Fairy, you play Derek Thompson, a minor league hockey player with a known penchant for knocking out your opponents' teeth (In a family film? Really?) and squashing the hopes and dreams of children all around you. For your crimes against childhood fantasies, you are sentenced to become the tooth fairy, which means you spend the next one hundred minutes prancing around in a tutu, getting chased by cats and generally making a clown out of your beefy self. I understand that a little self-deprecating humor is good every once in a while, but this is going too far.

Even if you did want to return to wrestling, you'd never be able to live it down. You'd come to the ring and challenge Triple H to a title shot only to have him say "Weren't you in that one movie where you pranced around in a tutu?" which will cause the entire arena to erupt in laughter. You won't have shit to say! Then Vince McMahon will strut down to the ring and growl "You're fired!" or something retarded like that, but that's beside the point I'm trying to make here, which is you're in a motherfucking tutu! Why would you do that to yourself? Sure, maybe you can pull some major bank out of it, but is money really worth this level of humiliation?

Just last year I saw this Jason Statham movie where he killed, like, a million dudes and then fucked Amy Smart silly. Maybe he didn't make as much money doing it, but isn't there something greater involved in doing a movie like that? The knowledge that you're the most badass motherfucker in Hollywood? This isn't like back in the day where guys like Arnold Schwarzenegger could do a movie like Junior and get away with it. People are less forgiving now. Remember when Vin Diesel did The Pacifier? He's still getting shit for it, and that was just one movie! He went back to do Fast and Furious, but it still stands out on his resume like a big, ugly mole, and it will never go away. You've done three Pacifiers since 2007, and as bad as The Pacifier was, at least Vin Diesel can say "Well, they didn't make me go around in a tutu and wings for the whole fucking thing." 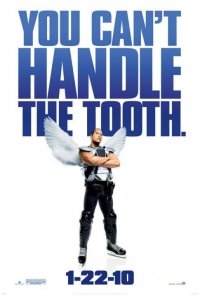 TOOTH PUNS!!!I'll admit, The Tooth Fairy isn't a complete disaster. There's a mildly amusing scene between you and Billy Crystal, and the film as a whole is mostly inoffensive. There are no fart jokes or puke jokes or sex jokes. The only demerits are a brief gag where you get hit in the crotch and a particularly nasty joke where you escape from your fellow hockey players by shrinking yourself down to about six inches and flushing yourself down a toilet - and you know what? I don't think I could possibly come up with a better analogy for what you're doing for your reputation.

No one's amused by this. You shouldn't be hamming it up in retarded family pictures. You need to be out there doing hardcore action flicks. You're still witty, you're still handsome and you're in as good a shape as I've ever seen you. Put down that tutu, Rock. You need to be in a movie where you kill a bunch of ninjas with your bare hands while you fuck supermodels and blow up planets just by staring at them.

Don't get me wrong, Rocky. I'm not writing this open letter in an attempt to put you down. I only want what's best for you. Also, I'd never say any of this shit to your face. If I ever met you in person I'd probably be all like "You looked fantastic in that tutu, Mr. Johnson." No one's asking for much out of you. No one's asking for you pull a Daniel Day-Lewis and go all method actor on us. All we ask is for you to play to your strengths and deliver what God put you on Earth to deliver. Give us some macho action flicks and then raise your eyebrow for the camera. Don't just do it for me, or your millions and millions of fans. Do it for yourself. I promise you, you'll feel so much better when you do.

PS: While we're at it, what the fuck is Seth MacFarlane doing in this movie?

MINORITY REPORT: I once had the great pleasure of being body-slammed by The Rock. I was weightless in his hands, and let me tell you: he sure knows how to slam a guy's body. He slammed my body hard; I could hardly walk after the body-slamming I got from him. We were both wearing tutus at the time. -David "Data Core Devil" del Vacote III