EXPECTATIONS: Another year, another bro-mance. (Have we stopped using that word yet? Really?) Paul Rudd has done this bit so many times, it's starting to seem a bit insincere. Let's face it, when it comes to comedic quasi-platonic guy-love relationships, dude gets around. This time it looks like he's feeling the love of Steve Carell, who has apparently decided to artistically represent the punchline of every single stand-up comedian who says "You remember that kid from school? You know what I'm talking about?" in his routine. Also, horrible ventriloquist/"comedian" Jeff Dunham appears, so there's a red flag to get things started right.

REALITY: A lot of fuss has been made about Steve Carell's recent decision to leave his hit show The Office, but after seeing Dinner for Schmucks, it makes perfect sense to me. If I could get paid a hell of a lot more and work a lot less doing basically the exact same thing I do anyway, I'd probably take it , too. The truth is, Carell and Rudd are just doing the things we've seen them do before, but it works, because they are very, very good at doing it. They are the respective Wolverines of "Obliviously Good-Natured" and "Sarcastic Straight Man." The script isn't great, but it's witty, and it's filled with enough gags to keep an otherwise fairly flimsy premise moving along. 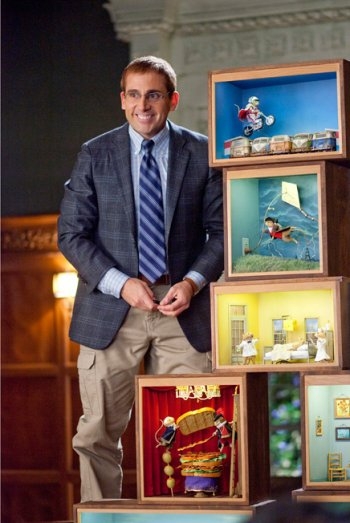 Just to prove I am a kooky character, here is my collection of weird shit!Ted (Paul Rudd) is a mid-level executive gunning for a position on the top floor. He impresses his boss Lance Fender (Bruce Greenwood) and his lackeys (Larry Williams and Ron "Look it's funny 'cause I'm doing the opposite of Office Space!" Livingston), only to learn that his promotion hinges on his performance at Fender's monthly dinner contest, in which guests bring the biggest idiot they can find, so they can be mercilessly mocked. Ted has mixed feelings about the affair until he meets Barry (Steve Carell), an IRS officer whose hobbies include making dioramas starring dead rodents, snooping through Ted's private things, and being Michael Scott.

There's also a plot point involving Ted potentially losing his girlfriend Julie (Stephanie Szostak) to a completely pointless character, uninhibited artist Kieran (Jemaine Clement). Clement's performance brings up a few pieces of advice for all you aspiring actors out there: It is not a great idea to make implied zoophilia a staple of your character. It is also not a great idea to ever play a role that can be described as "better when done by Russell Brand." And if you do both at the same time, I just do not know what to tell you.

Halfway through the film you get the feeling that the writers and director Jay Roach aren't really sure where to take the narrative, so they start making up excuses to get the two leads into the next zany situation. As a result, Dinner for Schmucks takes on a strange sort of screwball comedy ideal, almost invoking Martin and Lewis. There are clever gags here and there, but it's all mostly played by-the-numbers. There's a scene where Ted says mean things and Barry hears them; there are a number of moments designed solely to make Barry more empathetic and not completely obnoxious; it's all things we've seen before, but that doesn't mean it's not fun to watch again, until the final act.

In Le Diner de Cons (The Dinner Game), the César Award-winning French film upon which Schmucks is based, the duo never actually makes it to the dinner. (I would have mentioned this film earlier, but does its existence really matter to anyone who saw this Dinner for Schmucks opening weekend?) Dinner for Schmucks shows us why: The dinner actually kind of sucks. It's one thing to make a scene feel like something we've seen in other films. It's another thing entirely to make a scene feel like something we saw fifteen minutes earlier. It's a tough balance making Barry's idiosyncrasies teeter between endearing and just plain annoying through the whole film, but when you parade out a list of one-joke characters who have no time nor call to develop, things start to get a little grating. The third act also flies completely contrary to the rest of the film's message of "It's not cool to make fun of people who are different" by trying as hard as it possibly can to make it funny to exploit the loser characters.

This is where Jeff Dunham comes in. Mercifully, Jeff Dunham's puppet wife is kept to a scant few minutes of screen time, and it's still not as good as the exact same gag in Disney's animated Meet the Robinsons, though I might be the only person who ever saw that movie. Because Dunham is the biggest name among the "Schmucks" in that scene, we can say that he represents where the film goes wrong. Even the good gags (a blind man training to be an Olympic fencer) are brought down by the bad ones (A woman impersonates a boiling lobster). All of the guests are more irritating than funny, and even if they were funny, we would be assholes for laughing at them. A note for aspiring directors: If you are making a comedy, don't make the audience feel bad for laughing. Unless it's at Jeff Dunham. You should always feel bad if you laugh at Jeff Dunham. 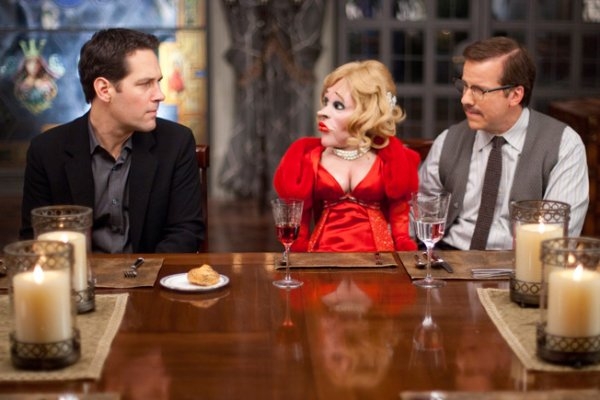 This is exactly as funny as it looks.

MINORITY REPORT: This reminds me of the dinner parties I used to host with my many guests when I was in charge of a small holiday camp in Germany in the thirties. Those were the salad days. -Montague "Legally Sane" Smythe