I dare say, book them Danny O.I live in Ohio. Not just any Ohio, but THE Ohio; small town Ohio. It's really where the action is if you enjoy entertaining functions such as fish fries, tractor pulls, buggy races, or generally drinking yourself to death because the alternative is existing in a world where absolutely nothing happens. Oh sure, if you're really creative you can find things to do - heck, I managed to find a lot of fun things to do this weekend - but that's beside the point. The point that it's beside is that by and large nothing at all of interest transpires here with any semblance of regularity.

The average citizen is not the person getting the rawest deal from all this, it's the small town newspapers that are getting the real shaft. My local newspaper here consists of a front page, which is almost always composed of syndicated AP news, and a sports section that covers exciting events like "Varsity Wrestling Team Defeats Rolling Pines at Semi-Finals" or "Lady Junior Jackets Lose 7-0". The only thing that interests me less than volleyball and wrestling scores are local volleyball and wrestling scores. However, there is a golden nugget of joy contained within the daily news; the regional news. Crammed into this fun filled section are the police report, the EMS report, and the fire department report, all three of which are filled with riveting excitement.

Much like Fragmaster and his archival work on the wonderful Fireman comics, I have gone through years of my local newspaper combing it for various highlights. After hours of painstaking high-tech microfiche research I have put together quite a few stunners. I have removed the year/month/day dates from these so that it seems as if they all transpired in one completely insane day, although they ranged from 1979 to 2000. Addresses and names have been changed to protect us from lawsuit, all of them are otherwise completely unedited. 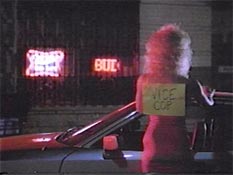 I'm moving up in the world! I'm stealing my comedy from pornography!

3:12 AM. Police dispatched to domestic disturbance call at 217 Rider Road. James Alms was found intoxicated and unconscious lodged in between a city dumpster and the brick wall of a local dining establishment. Police awakened him but where unable to remove him for holding. A tow truck was brought in to remove the dumpster. Mr. Alms suffered minor injuries.

4:45 AM. Shots and screaming were reported in the 500 block of South Main Street. Police arriving on the scene found that a raccoon was trapped inside the trunk of a derelict vehicle. The raccoon was taken into custody and the vehicle was impounded.

5:20 AM. Third warning ignored by Mr. Ronald Hanson of 1400 Roons Road. Rooster was taken into custody for pre-dawn noise complaints. Mr. Hanson was cited for raising livestock within city limits.

7:50 AM. An unidentified man was reported loitering naked in the 1100 block of South Goldman Avenue. Police were unable to locate the man but recovered a soiled pair of undergarments and an oversized red hat. It is unknown whether these belonged to the man.

10:05 AM. Police called to Bob Evans restaurant at 1215, State Route 29. An area man had called from a nearby pay phone complaining that the manager had refused to refund him his money for undercooked eggs. Police negotiated a deal with the manager in which the man received three dollars and ninety-seven cents compensation.

12:44 PM. Multiple reports of gunshots in the Waterfront District were traced to a Mr. Shelley Tatum's backfiring automobile. Mr. Tatum promised to have his car inspected. No official action was taken.

5:50 PM. Officers en route to a report of a trespasser in the Tri-City Commerce Park were unable to continue after a mysterious odor filled the cabin of their cruiser. The stench was later determined to have been caused by a large squirrel which had somehow found its way under the hood and become trapped.

7:20 PM. A juvenile couple refused to vacate the premises of the Lowry Lanes Bowling Alley. Female juvenile was apprehended and handed over to the custody of her parents, male juvenile escaped on foot with three bowling pins. Two of the pins were later recovered in an abandoned lot nearby.

9:43 PM. Police responded to a call of breaking and entering and attempted sexual assault at the O'Leary residence at 474 East Lansing Boulevard. The suspect was found hiding in the attic asleep on top of a pile of old clothing. Boots, the O'Leary's cat, was not taken into custody and Mrs. O'Leary apologized profusely to the police.

11:50 PM. Reports of unusual lights in the 200 block of Kirby Lane. Police dispatched to the scene identified the source of the lights as the pursuit lights on the patrol car of Officer Dickens who was issuing a traffic citation nearby. No charges were filed against Officer Dickens. 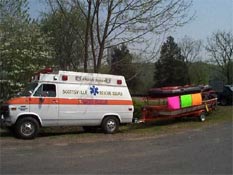 My town only has one ambulance, so if they get full they shoot you full of insulin and put you in the comaboat hitched to the back.

2:01 AM. Multiple fire and rescue units were dispatched to the reported scene of a large grass fire. John Taggert of 16650 Mason Road was burning a stump and was advised to extinguish the fire until normal daylight burning hours and to wet the surrounding trees and grass with a garden hose.

8:18 AM. Repeated 911 calls from Agatha Jordan, age 77, were received. Miss Jordan was requesting assistance from paramedics in dressing. The fourth call was handed over to the county sheriff's office and a female deputy was dispatched to assist her in donning her hosiery.

10:04 AM. A medical emergency call was received from the County Fairgrounds and nearby paramedics rushed to the scene. John Parcell was suffering from an obstruction of his airway brought about during the United Way Hot Dog Eating Contest. Mr. Parcell was treated and released.

11:15 AM. A man called suffering from a sunburn. He was advised to visit his physician or the emergency room and no ambulance was dispatched. He called back later to inform the 911 switchboard that they were "no good in his book".

1:37 PM. Police dispatch requested an ambulance at the scene of a reported shooting. Paramedics arrived and offered to treat Joanne Watts for a wasp sting to her thigh. She declined treatment.

4:07 PM. Laura Heighland of 1505 West Park Street requested an ambulance for her 3 year old daughter who had consumed an entire jar of mayonnaise. Vomiting was induced on the scene and her daughter was held for observation over night at the local hospital.

8:50 PM. Responded to a call from the Schaeffer residence on E. Well St. Mr. Schaeffer had become entangled in a string of Christmas lights and subsequently fell, suffering light bruising to the face and knee-area. He was treated at the scene and released into the custody of his wife.

9:12 PM. Ambulance Dispatched to medical emergency. The manager of the local theater reported finding the body of a patron in the bathroom. Paramedics identified the man as Robert Lumley of 414 Hawking Road. After a brief examination he was awakened and advised not to sleep while defecating.

10:20 PM. Paramedics dispatched to 815 Rex Road responding to complaints of unidentified bleeding from a juvenile woman. Paramedics explained to the frantic teen that the changes she was experiencing were perfectly natural and nothing to be afraid of. The juvenile was babysitting at the time and was taken home to her parents while officers waited with the children of Mr. And Mrs. Sumner.

Reading through all those I picked some of the more amusing ones out, however almost without fail they were this inane. If there was a burglary or a fist fight it would make the front page if not the headline, if there was a murder or a rape it would be on the front page for at least a month.

Not that the television news is any better. Lowtax has gone over all this before, but in case you missed that, local television news is just as bad as local newspapers, much worse when you consider that the TV stations are actually based out of larger metropolitan areas like Dayton and Columbus. Everything they do a report on is a "deadly threat" or it can "take your kid's life".

With the Internet it's either a "expanding our world with computers" type of report or "the Internet is full of horrible sex predators waiting to chew through your children's groins". Which it is, but they always have it all wrong. They go on and on about who to trust and what information is safe to give out online when all they need to do is show some reporter chatting on MSN Messenger with "~+Sexy^_^Gurl+~" and cut to shots of a sweaty old Korean guy jacking off. No one will ever fall for the whole online sex predator thing again.

When it comes to small town media, if you're asking me will my love grow, I don't knowwwwwwwwwwww. I don't know! Send in some crazy police/emergency logs to me and see if it will!