EXPECTATIONS: It seems that we're going ahead with this whole "adapting Jules Verne novels into self-referential family films and pretending they're all sequels to each other" thing, then? I'm not entirely opposed to the idea, but I wouldn't go as far as to say that Journey 2: The Mysterious Island looks particularly good in any way.

REALITY: Journey 2 is a film that I would have absolutely loved when I was a kid, probably leaving the cinema full of pure joy and spending the entirety of the following week relaying the events of the film to absolutely anyone who would listen. I imagine your kids will love it too, if you have any, and you probably won't hate it either. 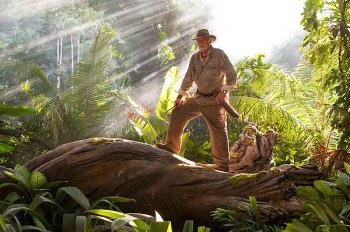 Hey, look! It's Indiana J- oh, wait no... it's just Harry Brown.Having already journeyed to the centre of the Earth, young Sean Anderson (Josh Hutcherson) sets his mind to finding Jules Verne's "Mysterious Island" after decoding a message from his grandfather Alexander (Michael Caine) with the help of his new step-dad Hank (Dwayne Johnson). Sean and Hank charter a helicopter from Gabato (Luis Guzmán) and his daughter Kailani (Vanessa Hudgens) and all four of them end up crash-landing on the Mysterious Island where they find Grandpa Anderson and have to find some way to escape before the whole place sinks.

It all sounds very slight, I know, and it is lighthearted to a fault, but this film understands the importance of its central theme, that the spirit of adventure is a vital thing to instill in the younger generation. The island is discovered by realising that Jules Verne's Mysterious Island is the same as Robert Louis Stephenson's Treasure Island and Jonathan Swift's Lilliput. They are all the same island, and these authors were writing about real phenomena. As contrived as that is, name-dropping these classic novels and suggesting they are based in a reality that still exists somewhere out there inspires a very real sense of wonderment that is hard to find in this modern world. The idea that there is anything on the planet that hasn't been explored and recorded to the point of saturation makes the future seem a little less bleak. Much like Tintin, Journey 2 is absolutely about the power of that sense of adventure.

This all comes together in the characters and their relationships. Sean and Hank have a strained relationship, as you'd expect. It's quite well-executed, as not only is Hank taking the place of Sean's father in his life, bringing in a new family dynamic for the character, but also Dwayne Johnson is replacing Brendan Fraser as the lead actor in the sequel. Fans of the original film, especially young fans in a similar situation as Sean, will find a good connection there that may help them come to terms with some things. It's rather bold for a sequel to a family film to deal with these kinds of relationships so directly, as innocuous as that might seem to us. 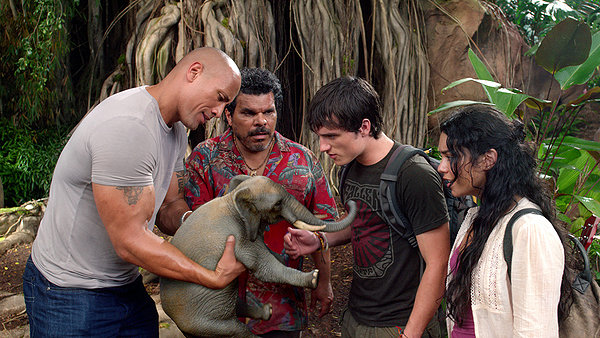 Oh, it gets sillier.

When Alexander is introduced, it seems like any tension and conflict is resolved in no time, which kind of lessens the effectiveness of the dynamic I mentioned above. To combat this, they try to throw in a few other relationships to pique our interests. A romance between Sean and Kailani is about as uninteresting and predictable as you'd expect. Gabato is desperately trying to provide a better life for his daughter in spite of his being an incompetent, bumbling idiot; this only really works on any level because of Luis Guzmán's ability to be a lot funnier than his material. One thing that does work is an implied homosexual attraction between Gabato and Hank: Even though it's played mostly for laughs, it is subtle and surprisingly heartfelt. It's a shame that Guzmán is funneled into these very specific character roles because he is much more talented than that.

Something that this film absolutely lacks is any kind of antagonist. The original novel had Captain Bob Harvey and his band of pirates to scupper the plans of the protagonists; this film doesn't have any facsimile of that character at all. Once all the tension between Sean and Hank has been resolved, there's nothing left to get in these characters' ways. So the island starts sinking and there's a giant electric eel, but none of that really resonates in the way a strong villainous presence would have. This isn't helped by the fact that nobody in this film ever gives the impression of being in jeopardy. Hell, Johnson can't even convincingly pretend that something he's lifting is heavy. I understand that they wanted it to feel a bit safer for the sake of the younger audience, but you can't have your cast grinning the whole damn time. 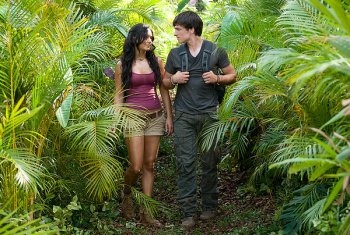 Not what I'd describe as a romantic chemistry.The biggest problem with this film is that for all of its love of adventure, it doesn't really allude to much in the way of past adventures, given where the action is taking place. Considering how these characters are seemingly following in the literal footsteps of Verne, Stephenson and Swift, those footsteps appear to be completely invisible. They really missed a trick here in overlooking how these revered storytellers might have left their mark on the actual Mysterious Island: It could have been a wonderful piece of historical storytelling like Hugo if they'd embraced this idea. Or maybe something more along the lines of the brilliant Nicolas Cage vehicle National Treasure.

The whole Journey franchise, as it appears to be trying to exist, is such a bizarre move. Turning an author's ouevre into a series of family adventure-comedies that bear little relationship to their source material and yet refer to them directly? Who could have dreamed up this madness? I'm kind of glad they did, though, and if this film convinces one twelve-year-old kid to read Jules Verne, then bring on Journey 3: Earth to the Moon as soon as possible.

MINORITY REPORT: "The Rock goes to an exotic locale and punches most of the wildlife." This seems like the film that a lot of nerds assumed The Grey was going to be, but instead of confronting questions of faith, these characters ride giant honeybees and question their own sanity. I can get behind that. -Joseph "Jay Dub" Wade