The Woman in Black

EXPECTATIONS: Even though we've been inundated with ads for this movie since last year, I'm still looking forward to it. Everything about this film has a very old-school horror vibe to it, and it's an interesting choice for Daniel Radcliffe to begin the "Seriously guys, I'm not Harry Potter anymore" phase of his career. Plus, it was written by Jane Goldman, who manages to increase my crush on her with every screenplay she puts out. Also, my standard for horror films has dropped so low that I'll pretty much give a passing grade to anything that manages to have an actual ending.

REALITY: It turns out there's a reason for the '60s-horror feel to this movie. It's from Hammer Films, who brought us the Peter Cushing/Christopher Lee monster movies of that era. This marks something of a first for me, as I've never before been excited to see the studio logo at the beginning of a movie. As this happened, it also occurred to me that I am a huge dork.


The Woman in Black tells the story of Arthur Kipps (Daniel Radcliffe), a young lawyer raising his 4-year-old son alone while mourning the loss of his wife, who died in childbirth. Because he's more concerned with the raising and mourning parts of that sentence than with the lawyering part, Arthur's job is in danger unless he manages to complete one last account, involving the estate of a deceased woman. This requires Arthur to visit a small village where everyone instantly hates him and acts like someone's going to die wherever he goes. This may be because Arthur dresses like a mortician the whole movie, or it may be because people literally start dying wherever he goes.

See, the house Arthur has to go to is haunted by the titular Woman in Black, a specter with the ability to make a child commit suicide every time she is seen. No one tells Arthur this, but they all hate him for going out to the house, because he was apparently just supposed to assume that he was going to murder their children by going through some paperwork. 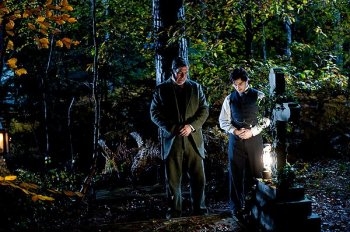 You know, I might like to be buried here myself...I've mentioned my disdain for pop-scares, where a creepy thing jumps out and is gone again in a second, but The Lady in Black is like a primer for how to do these things properly. Every jump in this movie seems well-planned, with strong pacing and a good lead-in. There's even a great bit where one minor jump scare serves as foreshadowing for a major one later on. It's the kind of movie that rewards you for being an active viewer rather than a passive one. The more attention you pay, the better the scares are. Which is why I almost wish that they had picked a worse actor to play the lead. Radcliffe seems so in-his-element here that it's a shame most of the movie revolves around not looking at him. Because so much of the film is him alone in a house, the movie trains your eyes to not pay attention to him, but instead to scan the background and the scenery to see where the next subtle scare is coming from. In this regard, it doesn't even matter that Radcliffe seems like he'd be right at home in a Haunted House running from Vincent Price, because you're not even going to notice. If this is the case, give me a Hayden Christensen or a Taylor Lautner, someone who is used to being upstaged by wallpaper, not someone who's actually good at his job.

Unfortunately, every time this film does something interesting, it starts over-explaining its point to the audience. I was very impressed with the way Arthur's backstory was established, because in the first ten seconds of the film, without even really focusing the camera, everything I needed to know about the character was set out for me. Wedding ring, pregnant belly, sad man. That's it, I can fill in the blanks from there. But like the cinematic equivalent of No Child Left Behind, we have to sit and wait through pace-ruining, unneeded flashbacks and strained reminders that Mommy's dead, just to make sure everyone is following along.

Similarly, a great shot of Arthur being crept up on by the specter is ruined by taking us literally into The Woman in Black's point of view in case anyone missed her in the background. This really serves no purpose except to be done again later in the movie when they recreate the exact same scene. Then, the final shot of the film involves the Woman in Black sitting somewhere, then looking directly into the camera, right out at us. It's creepy enough, but what's the point when we've been looking at her the whole time? 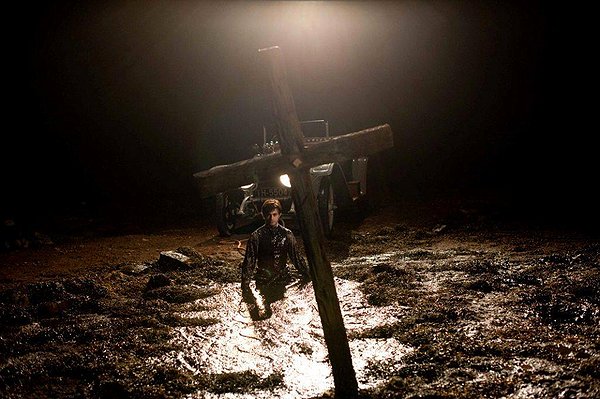 These complaints aside, The Woman in Black handles itself very well, without falling into the same traps most PG-13 horror films do. (When did horror movies replace romantic comedies as the official genre of 14-year old girls? I hesitantly approve of this trend.) Strangely enough, it deserves a spot alongside The Descendents and The Grey in its mature handling of loss and death themes. As with most good horror, spirituality and coping mechanisms walk alongside the grotesque corpses. It's a surprisingly mature period drama most of the time, like it belongs on PBS. Then we focus in on the screaming rotting ghost woman, and we remember that yes, this is what we came here for.

There's not much to The Woman in Black that's new -- the gothic haunted house and the creepy children's toys are clichés unto themselves -- but that doesn't matter. (Side note, why were turn-of-the-century kids' toys so damn creepy? When did any child not find wind-up grinning monkeys terrifying?) Sure, this stuff has been done before, but for whatever reason, we keep feeling the urge to revisit it. What matters is the way this movie uses what we've seen before in ways that are mostly clever and interesting. There's a merging of classic horror attitude with contemporary cinematic technique, which makes it a satisfying ghost story the likes of which we don't get to see that often.

As an afterthought, I walked out of the theater to see a whole group of children staring me in the face and smiling, which is similar to walking out of Friday the 13th and seeing a bunch of camp counselors. You just want to say "Good luck, you poor bastards."

MINORITY REPORT: Daniel Radcliffe may be unconvincing as a solicitor who drinks (gasp!), but the atmosphere, the sheer number of effective jump scares and the ending combine to make The Woman in Black a fun late entry to the Hammer horror catalog, so long as you don't think about it for too long. -Sean "Keanu Grieves" Hanson