EXPECTATIONS: Ian assured me that Big Miracle was right up my alley, because even though this isn't technically a "talking animal film," whales talk to each other all the time and that counts. That's logic I simply cannot argue with.

REALITY: Back when I was in school, the most fun days were the ones where the teacher was either out sick or hungover or tired of our bullshit, and the lesson plan was put on hold in favor of Movie Day. This was my first introduction to such classics as 12 Angry Men, Inherit the Wind and Roland Emmerich's The Patriot, films that illustrate how the world works without resorting to drab lecturing. So imagine my disappointment when I sat down for Big Miracle only to realize that it's little more than a calculated effort to ruin High School Civics Class Movie Day by actually attempting to teach kids things.


Big Miracle relates the true story of how three Alaskan whales escaped a frozen deathtrap thanks to the combined efforts of the media, Greenpeace, local fisherman, and Soviet Russia. Field reporter Adam Carlson (TV's John Krasinski) happens upon the whales while searching for stories in Barrow, Alaska. It's not long before his story prompts people from all walks of life to descend upon the town, among them an environmental activist (Drew Barrymore), an oil tycoon J.W. McGraw (Ted Danson), a plucky Hollywood reporter (Kristen Bell) and a dogged army colonel (The Grey's Dermot Mulroney). Together, everyone learns to put their personal politics aside in order to save the whales. 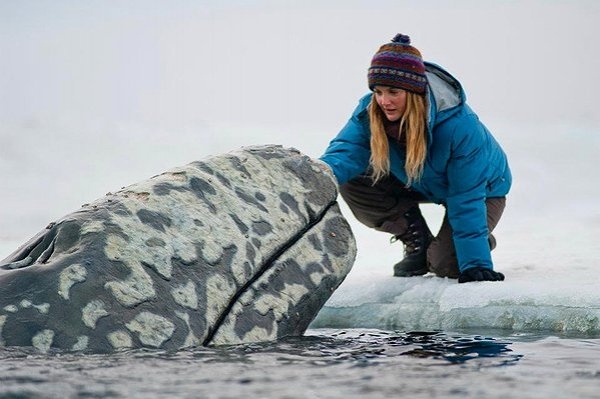 Spoiler: the whale eats her.

That last bit is paramount to Big Miracle's lesson plan. If this film is about anything, it's about accepting alternative points of view. Seems like every single person gets a scene where they have to face the fact that if they keep fighting against saving the whales, they're going to look like a bunch of giant assholes for it. The whalers realize it, McGraw realizes it, Ronald Reagan realizes it; hell, even the Soviets realize it. Somehow, this film morphs from a local story of people helping whales, to a matter of politicians around the world trying to save face in front of the media. (We even get to see Reagan pick up the phone and address Mikhail Gorbachev as 'Gorby,' which is the most saccharine revisionist image of Reagan I've ever seen.)

The film illustrates -- in painstaking detail -- how many factions are affected by this story, and how each one relates to the others and the stakes involved. It's like a disaster film where the disaster is something completely mundane. To the film's credit, though, none of this exposition ever bogs down the actual storytelling. This could have been a case where everyone sits down at a table 12 Angry Men-style to hash out the rights and wrongs of the situation, break out Robert's Rules of Order and settle the fates of the whales by committee. Big Miracle could have become two hours of "Hey kids, let's talk about Cold War geopolitics," but thankfully director Ken Kwapis remembered that this is supposed to be a film, not a city council meeting. 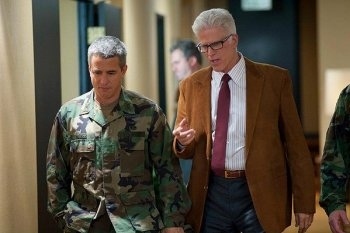 No, I'm telling you; I was a famous actor once.That said, this film does dole out an awful lot of information, and it uses TV news beats as a crutch for that very purpose. Two of Big Miracle's main characters are reporters, so at least it makes sense that the film would play up the presence of the news media, but the amount of time Big Miracle spends explaining the plot to us through news reports is staggering. On multiple occasions, we see a monitor board of eight different news stories running simultaneously to let us know just how widespread this story is going. It almost seems like the writers didn't trust the characters to carry the story, so they built the whole thing around the premise of watching the nightly news. Because there's nothing kids love more than watching the news.

For what it's worth, the characters turn out to be agreeably drawn caricatures of political stereotypes. Between Drew Barrymore and Ted Danson, it's a tight race to see who can out-stereotype the other, what with one spewing political eco-babble like an auctioneer and the other sneering his way into a PR windfall. Politically minded types might find one of these two completely unbearable (if not both), but to my mind there's never a scene where they completely spiral into a parody of the politics they embody.

So maybe Big Miracle wouldn't be a complete waste of an afternoon in Civics class. It tries to teach the broad strokes of late-era Cold War politics and environmental activism all wrapped in the warm blanket of Working Together. It's also a long slog of a film where plot takes a backseat to educational displays of problem-solving. Whether you find the film entertaining is all a matter of how much you care about whales. If they aren't really your thing, you might actually enjoy this one, because for a film all about rescuing whales, Big Miracle spends surprisingly few scenes dealing with them.

MINORITY REPORT: My question is, when are we going to get a movie about those intrepid Oregonian heroes in the '70s who, upon discovering a beached whale upon their shores, majestically and respectfully blew it the fuck up? That's the movie I want to see. -Martin R. "Vargo" Schneider