EXPECTATIONS: In Britain, all the top comedians eventually become film directors. Chris Morris and Armando Iannucci recently lit up the world with their brilliant directorial efforts (Four Lions and In the Loop, respectively). Now it is time for Joe Cornish to step up. Best known for being one half of the comedy duo Adam and Joe (alongside Adam Buxton), Cornish aims to take the title of go-to British comedy-horror movie from Shaun of the Dead with his first feature film Attack the Block.

REALITY: In contrast to this week's Cowboys and Aliens, you could call Attack the Block "Hoodies and Aliens," if you were the kind of person who enjoyed referring to films by made-up titles. Even that would be unfair, because while Favreau has taken a film genre he loves and thrown all the tropes together with a dash of aliens, what Joe Cornish has done is much more sincere.

The story begins when a gang of London youths, led by Moses (John Boyega), attack and kill a strange creature in the park, only to find that it is the beginning of an alien invasion. Now the youngsters must fight for their lives and a learn a thing or two along the way. As stories go, it's exactly as simple as it needs to be. 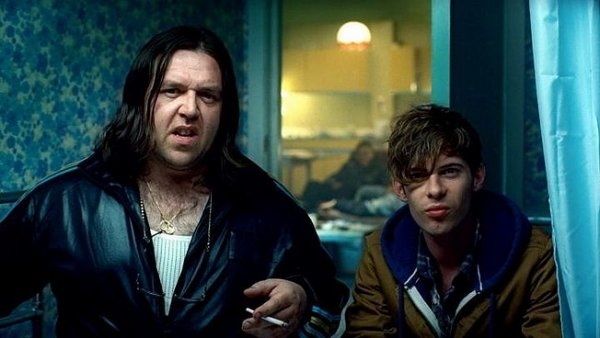 Inspired by the action-packed American monster movies of the '80s, Joe Cornish has brought the concept into his own environment. However, the most important thing to remember here, and it is something that misleading marketing departments have tried their best to hide from you, is that Attack the Block isn't really a comedy. What it is is hard to say upon initial viewing. There is certainly humour in here, but it stems more from the characters themselves than the situation, which is handled deadly serious. Attack the Block is a film that does not attempt to copy or parody anything that has gone before, instead choosing to be another strong entry in a genre that Cornish has a lot of love for, all while being incredibly down-to-Earth and intrinsically British. 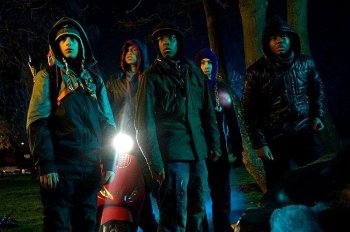 You'd pull the same face too if you saw what they'd just seen. Whatever that is.Attack the Block tries to break down prejudices, whether they be generational, racial or otherwise. Everything in the film boils down to upturning some prejudicial assumption made by one or all of the characters. In that regard, it actually works quite well. It could easily have fallen into repetition or mawkish sentimentality, but it never does. This is entirely due to the strength of the character development. Everyone in the film is believable, flawed and often likeable in spite of some of their actions. It doesn't hurt that we're in the hands of a terrific group of young actors.

The dialogue in this film has been a source of some befuddlement to a lot of my peers in the writing-down-our opinions-on-films field. The slang used herein is very realistic and quite sharply written. If you're from London and under twenty, this will just sound like normal speech to you. Where I'm from, you would have to replace every slang word that appears in the script with "dickhead" and you'd know where you were. Thankfully, I had absolutely no trouble following what was being said at any time. I guess that just means I'm not old yet.

The creature design is also very effective; the aliens are basically mouths on legs with glow-in-the-dark teeth and black fur. Unfortunately, there's not an awful lot of them. By that I don't mean the film skimps on scenes of alien carnage, there's certainly enough of that. What I mean is that we just don't get to see much of what's going on during the action sequences. Cornish is obviously a great believer in keeping the monsters in the dark, giving the audience only mere glimpses until we're ready to see them in all their glory in the third act. That worked out great in Alien, where the monster was a single slow-moving penis monster, but here Cornish would have done well to give us a little more during some of the bigger set pieces. For this reason, the climax is a little unsatisfying. Perhaps this whole approach came about as a budgetary concern. If that is the case, you have to wonder why they didn't try something a little less ambitious at times.

For being so smartly written and effectively realised in every other area, the biggest thing that Attack the Block aims for - being a sincere monster movie set in a London council estate - is sadly missed by a very small margin. That said, we now finally have the answer to the question of why aliens always attack New York in the movies and never land in some shit-hole in England; it's because they're scared.

Now we just need a film where giant U.F.Os land in North Yorkshire and our heroes spend the whole film sitting in pubs griping about how the space-ships are scaring the sheep and taking up all the parking spaces at The Lion.

MINORITY REPORT: In so many alien invasion films the ET hordes are quashed using guns and bombs and crazy Randy Quaids. It's nice to know that the Brits are still fighting the good fight with blunt objects and sheer force of will. - Joseph "Jay Dub" Wade