EXPECTATIONS: CGI Smurfs. Real Actors. You do the math.

I'd like to leave it at that, but some folks wouldn't put those things together in their heads and have them add up to a pants-shitting nightmare. Why do people still think it's cute to take cartoons and shove them headfirst into a realistic setting? The Smurfs are tiny little blue sharecroppers who get chased around by a goofy-looking wizard and his dumbass cat. Since that in itself is not a movie, we have to send them to New York and have them meet Neil Patrick Harris. The last time I expected him to save a movie, he let me down in the worst way, so for The Smurfs I'm going to expect this cocktail of absinthe and Nyquil to watch the film for me.

REALITY: There are some experiences in life that seem to go perfectly smooth at the time, but whose emotionally draining effect is only apparent after the fact. The Smurfs is one such experience. The movie itself is as inoffensive and safe as children's films come, but once you leave you start experiencing a kind of battle fatigue known only to film critics and people forced to listen to Top 40 radio. Now, I've compiled a list of three easy steps to help you 'enjoy' The Smurfs every bit as much as I did: 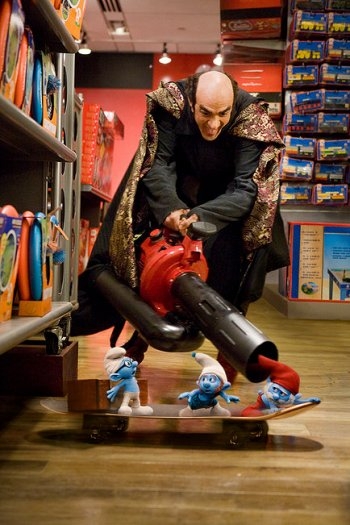 
Step 2) Go to the Palms hotel & casino and ask to see a pit boss named [REDACTED]. He also runs a nearby liquor store, and can hook you up with enough spirits and nightmare suppressants to stave off suicidal thoughts from even the worst Smurf-related puns (dear god, the puns...)

Now at some point in this process you should've found time to watch the movie. It's not terribly important when. I can't recall exactly at which point in the process this happened for me, but the memory of the film itself is etched into my brain very clearly, like so many racial slurs in a truck-stop bathroom.

As live-action films based on thirty-year old cartoons go, The Smurfs isn't terrible. Granted, my yardstick for terrible is Yogi Bear, and compared to that film, this one is a masterpiece of comedy. The fact that it's not playing solely to three-year-olds gives it a leg up over Yogi Bear. No, the live-action version of The Smurfs is merely a disappointment compared to that monstrosity.

It's disappointing that the filmmakers relied on boring celebrity stunt-casting for the main Smurfs, but filled out the supporting cast with legitimately funny performers who only get a line or two to make any kind of impression. It's disappointing that The Smurfs takes such a boilerplate, generic story and tries to pad it out with plot points about corporate America that children simply aren't going to give a shit about. It's also disappointing that the movie seems to know that kids won't care, so it doesn't bother fleshing it out any further than it absolutely has to, and as a result winds up making zero logical sense.

Speaking of which, what's the story here? As in nearly every episode of the cartoon, Gargamel (Hank Azaria) wants to capture all the Smurfs, kill them, and use their precious bodily fluids to become the greatest wizard in the world. After stumbling upon their village, apparently for the first time ever, he chases the Smurfs out into the forest. Instead of following and capturing the vast majority of the Smurfs, he chooses to follow six of them into a portal that leads to New York. Clumsy Smurf (voice of Anton Yelchin) finds his way into the home of an ad executive (Neil Patrick Harris), prompting Papa Smurf, Smurfette, Grouchy Smurf, Gutsy Smurf, Brainy Smurf, Bashful and Dopey to follow him. NPH learns the importance of being able to take care of a tiny person (his wife is expecting, you see); Clumsy Smurf learns to stop being an idiot; and Gargamel doesn't learn a goddamn thing because he keeps getting hit by cars.

I'm fairly certain that's all the plot this movie had to offer. Aside from a dead-end plot thread wherein Gargamel becomes the toast of the fashion world for his de-aging spell, The Smurfs is surprisingly light on any kind of meaningful commentary. I know, I know, what the hell kind of commentary do I expect from a movie that uses the phrase "Smurf me" unironically? A better question would be what the hell else should we expect from the creative genius behind modern classics such as Scooby Doo 2: Monsters Unleashed and Beverly Hills Chihuahua? 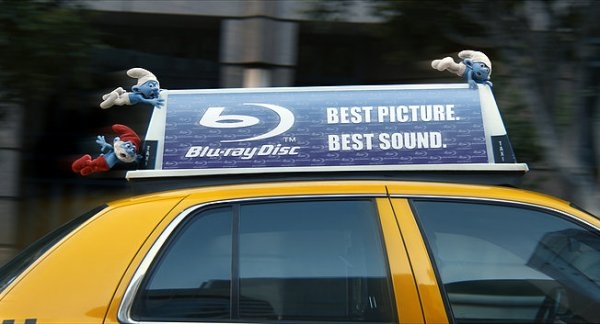 It's product placement disguised as a terrible visual gag! The mainstay of all children's entertainment.

What is this film? No, really. What is this? Who is this even supposed to appeal to? It's certainly not children. No child I know is going to care about or even understand why Neil Patrick Harris is in danger of losing his job over a shitty ad campaign that's actually not all that bad. What child will understand how disturbing it is for Smurfs to sing along to "Walk This Way" in the presence of Smurfette? I guarantee all the fake swearing going on in the film will go right over all their heads.

So is the film for their parents, the very people who grew up watching the original cartoon? I doubt it. My hope for humanity is dwindling, but I at least hope most adults have enough sense to know that these are not the Smurfs they grew up with. These are a computerized reproduction of what some idiot executive thinks the Smurfs were. Katy Perry and George Lopez have no real business voicing Smurfs, but let's throw them in anyway so we can include stupid, ham-fisted references to the fact that Katy Perry and George Lopez are in the film. If mom and dad are anything like me, then they want these people to go away just as much as I do. While we're at it, why don't we cast Christian Bale and have him say to Gargamel "How 'bout that Batman?"


The Smurfs is basically a Triscuit cracker. It's light, it's small, it's a little salty, and you'll forget all about it in an hour. At least, I hope *I* forget about it soon. For now, though, I'll just sit and stew at the casino bar. Brainy Smurf is gonna keep me company and explain to me how the stock market is a much less ridiculous way to lose all my money.

MINORITY REPORT: Oh great, now I have to put Jay Dub through therapy again. This time it's coming out of your expense account. - Ian "ProfessorClumsy" Maddison