EXPECTATIONS: It's always interesting around the Current Releases offices whenever a festival film comes down the pike. On the one hand, it allows us the opportunity to write something a little more high-class than controversial opinions on action-figure movies for manchildren. On the other, it's a reminder of how lowbrow we actually are, because none of us know what this film is. I can tell you, totally without Wikipedia, that this is the fourth film by director Whit Stillman, most famous for the 1989 film Metropolitan, which is a movie I've never seen, but has an important-enough sounding title to slip into conversations. Apparently, this is Stillman's return after 13 years away from the camera, which makes this kinda like The Tree of Life, except even less people are going to see it.

REALITY: Try as I might, I don't have much knowledge of what happened immediately after my screening of Damsels in Distress. I was in the theater seat, and then I was in the office, much in the same way you magically appear at home seconds after the dentist gives you the happy mask.

"It has four main actresses!" I declared.

"Aubrey Plaza has a cameo! So does Cousin Maebe!" I shouted, like a child who has dressed himself.

Okay, so I'm having a difficult time deciding whether or not I actually liked Damsels in Distress. Unfortunately, that's basically the bare minimum requirement for doing my job, so let me give this a shot.

The Damsels are Violet (Greta Gerwig), Heather (Carrie MacLemore) and Rose (Megalyn Echikunwoke), a group of girls who live together at an East Coast private college. The girls are intentional anachronisms: They talk, act, and dress with a higher sense of formality than any of their peers, and while this is certainly intentional, no one ever calls attention to it. This means the dialogue and really the tone of the whole film require a lot off getting used to. It's kinda like Apartment 3G: The Movie, except it's actually entertaining.

Anyway, the movie opens with the girls discovering the new girl Lily (Analeigh Tipton) and forcing her under their wings, like a slightly pretentious version of Mean Girls. The girls think so highly of themselves that they believe it is their mission in life to get others' lives back on track. Because of this they run the campus' suicide prevention center, which treats depressed people with... tap dancing lessons. However, once boys come into the picture (The "Distresses"), they tear at the bonds between the girls, revealing their weaknesses, their insecurities, and the fact that all the overwritten dialogue in the Whedonverse can't save a woman from dating a moron. Also, there's a subplot about a religion dedicated to the sacred holy act of anal sex. Not even joking. 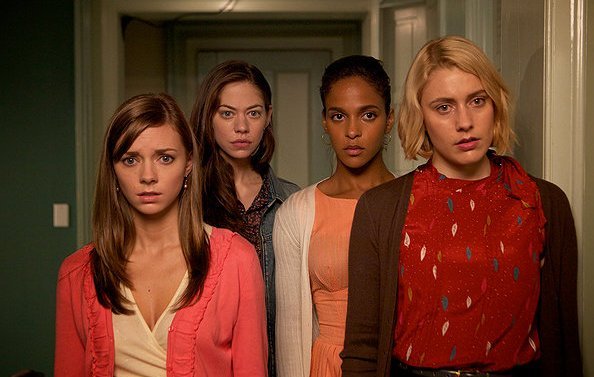 You're a missionary from the Church of WHAT?!

That was a very long plot description, and I don't think I mentioned half of the things that happen in this film. The thing is, they don't really matter. That's the kind of movie this is. It throws out details and plot points that don't really seem connected to each other, and the movie just trails along at its own speed, letting us decide whether we find it bizarre, charming, or charmingly bizarre. There is character development and some sort of an arc for most of these characters, but it doesn't matter. The movie transforms from some sort of satire to an outright farce halfway through, and if it can't decide what it's supposed to be, how can I figure out what I'm watching?

Damsels in Distress is a good movie, that much I can tell you. However, it is a polarizing one, and whether you will actually enjoy the film is a bit of a toss-up. The best comparisons I can make are to the works of Wes Anderson, or I Heart Huckabees-level David O. Russell, with a bit of Gosford Park thrown in there. The dialogue is clever and witty, but it really seems to know exactly how clever and witty it is, and some might find that off-putting. However, the giant plus that offsets any of the minuses I can find is the performance of Greta Gerwig. Gerwig takes what could have been a completely unlikable character and infuses here with a sense of naivete and innocence that makes her sympathetic, even relatable. There are shades of young Kate Winslet there, and that's pretty much the highest compliment I can pay an actress these days.

I guess what it comes down to is deciding one's tolerance level for quirkiness. Personally, every time I felt the movie was becoming a little too twee (I hate that this is even a real, spellcheck-recognized word), something hilarious would happen to keep me rolling with it a while longer. I would say that the film has no real sense of where it is going, but that seems to be the whole point. By the third act, it loses all semblance of a plotline, and events just sort of fall haphazardly, but somehow it's still good. You've spent so much time inside this universe that you're having fun watching it play out. Because of its engrossing nature, I'm ready to take a stand and declare yes, yes I did enjoy Damsels. Besides, it's almost impossible to dislike a movie that ends in not one but two dance parties, and makes them both classy and hilarious.

MINORITY REPORT: Martin, we were going to give back your English degree, but your disdain for the word "twee" has made us reconsider. We're sorry. You will have to repeat school. All of it. - Vargo's Professors