EXPECTATIONS: As a comedian, Bobcat Goldthwait's brand of howling buffoonery is the stuff of legend. He's a legend in the sense that one kid might say to another, "Hey, I hear those Police Academy movies feature a real live hyena!" As a writer/director, though, Bobcat's reputation mostly escapes me, though World's Greatest Dad did turn out to be a surprisingly dark exploration of what people will do to achieve fame. With that film in mind, I'm hoping God Bless America will provide something a little deeper than the rampant violence suggested in the trailers.

REALITY: Everyone has revenge fantasies. Even if you're saying to yourself, "Not me, I'm a well-adjusted individual who loves my lot in life," I'll bet you still probably think about that crushing zinger you're going to say next time you see that stupid Tina in accounting, or how much you want to slash Snooki's tires. We all secretly want to do something terrible to someone we hate, but most of us are smart enough to know better. God Bless America is either a scathing indictment of the trash culture America has cultivated for itself, or a mean-spirited power fantasy for the people who are too levelheaded to call out the people they hate.

Frank (Joel Murray) leads a miserable life. His neighbors are self-entitled morons, his ex-wife and daughter hate his guts, he's just been unfairly fired, and his doctor has just diagnosed him with a brain tumor. With nothing left to do but go home and sulk in front of the TV, Frank is inundated with the fruits of America's horrific celebrity culture. Just before ending his own life, Frank has an idea: why not take out some of these people along with him? After brutally murdering the star of a My Super Sweet 16 knockoff, Frank picks up an agitated teen named Roxy (Tara Lynne Barr) who shares his disdain for the world. Together, Frank and Roxy rampage across the country to their final target: AmericanIdolSuperstars. 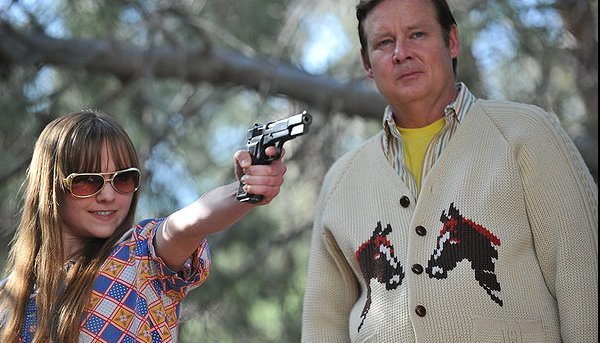 What the film lacks in tact or wit it makes up for in conviction. The utter contempt for society spewing from Frank and Roxy's mouths is palpable. While some of their hate seems needlessly shallow ("You know who I hate? People who give high fives!"), there is a nugget of truth to some of their rantings. Fear-mongering political pundits and talent show hosts mocking their contestants are worthy of criticism, and one wouldn't be wrong in suggesting that both are dumbing down society, but taking aim at self-entitled brats not only seems over-the-top, but also downright psychotic.

Of course, that may be Goldthwait's entire point. We all hate drama queens and kids who talk on their phones at the movies, but it takes a seriously unhinged person to act on that aggression -- and unlike the movies, it's never a glamorous or cool kind of mental breakdown. Frank nearly botches his first kill because he tries too hard to play it cool. The film makes passing reference to similar, 'cooler' crime spree movies, but it's too rough-shod a production to match the sheer energy and go-for-broke attitude of Bonnie and Clyde and Natural Born Killers. At times, it seems that Goldthwait is afraid to make the comparison, almost as though he realizes just how silly it is in the first place.

Early on, Frank compares American Superstars to the Roman Colosseum, and explains to a co-worker that the moment we start mocking each other for sport is the moment society begins to collapse. He asks, "Why have a civilization anymore if we're no longer interested in being civilized?" The comment sails right over the head of his co-worker, who shrugs Frank off as being just a stick in the mud. This is an important moment in the film, as it paints Frank's killing spree as not borne out of a need to murder the unjust, but a desire to see society take responsibility for itself. That motivation pops up time and again, but seemingly only to keep Roxy's ADD-fueled rage in check. 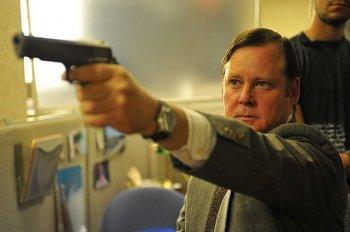 You said it, brother.To his credit, Joel Murray does a fine job of carrying the film. He has that perfect sadsack look to him and plays up Frank's frustrations to the hilt. His is a quiet sort of contempt, the kind you see on the face of someone who just missed out on the vending machine's last cinnamon roll. Murray makes you believe that a man like this could snap. It's clear that Frank truly doesn't care what he looks like, spending half the film walking around in a Hawaiian shirt, shorts and a fedora like he just stepped out of The Internet. When you've got nothing left to lose, I guess your fashion sense dials down to zero as well.

Tara Lynne Barr's Roxy is a different beast entirely. Barr is perfectly capable of rattling off the litany of grievances and irritations that Goldthwait puts in her mouth, but there's something about her performance that I simply don't buy. She seems too eager and excited to be a part of this killing spree. To address a comparison drawn by Roxy, she isn't at all the Bonnie to Frank's Clyde, no matter how many berets she puts on. It comes across more that Barr is having far too much fun starring in an action movie to take her character seriously. Then again, nobody in the film takes her character seriously, so why should she?

In a world where films like Hobo With a Shotgun and Natural Born Killers didn't exist, I could imagine God Bless America awkwardly filling that niche. Wanting to blow the American Idol judges to smithereens may well be the fantasy of every lunkheaded teen with a chip on his shoulder, but it's a fantasy we all grow out of in time. Realizing how easy it is to ignore trash TV is one of the first steps on the road to cultural manhood, and God Bless America plays out like the first baby steps of a man who hasn't already been making films for twenty years.

MINORITY REPORT: Oh man, this is gonna be AWESOME! Yeah, man, you totally kill those people for being annoying and different from me! This is like The Boondock Saints, but more funnylike! - The Entire Internet