EXPECTATIONS: I can't say I'm expecting much out of Million Dollar Arm. Jon Hamm brings his inimitable charm to pretty much any project he wanders into, so I'm hoping that'll at least be enough to carry the rest of the film. One can only take so much fish-out-of-water, culture clash malarkey in a single sitting, and I have a feeling this film is going to drown me in it.

REALITY: Million Dollar Arm joins the illustrious company of films such as The Mighty Ducks, Cool Runnings, and Air Bud; all Disney films preaching the message that literally anybody can win at sports. There's nothing in the rulebook that says a dog can't play basketball, a Jamaican can't bobsled, or a bunch of poor kids can't play hockey. To that end Million Dollar Arm teaches us that, with an infinite supply of second chances, a playboy bachelor sports agent can sign anyone on the planet to a Major League Baseball team. That's who this film's about, right? 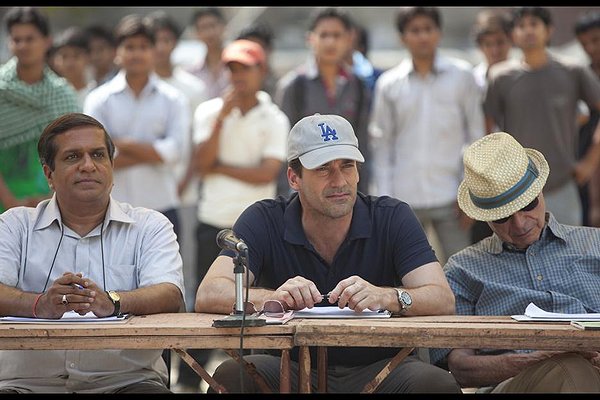 
This film tells the true story of JB Bernstein (Jon Hamm), a sports agent desperate to sign the Next Big Thing. When a deal with a rising NFL star falls through, JB and his partner Aash (Aasif Mandvi) set their sights on the world of cricket. They bowl pretty fast in cricket, JB reasons, so who's to say a cricket bowler can't be trained to pitch a baseball? With a snoozing baseball scout (Alan Arkin) in tow, they travel to India in search of two perfect candidates. They find their golden boys in Dinesh (Slumdog Millionaire's Madhar Mittal) and Rinku (Life of Pi's Suraj Sharma), and bring the two back to Los Angeles for training. Do the boys have what it takes to make it in the major leagues? Of course they do. Why would Disney bother making a movie out of a failed publicity stunt?

That's the story being sold to you. (Incidentally, that's also the story JB spends most of the movie selling to anyone who'll listen.) But while Dinesh and Rinku struggle under the tutelage of oddball baseball coach Tom House (Bill Paxton), JB struggles to adapt to his new role as the de facto father of a couple of teenagers. When it becomes clear that Rinku, Dinesh and their overly excited translator Amit (Pitobash) can't live in LA on their own, JB brings them into his giant, family-sized home full of bedrooms that he's never used before. This becomes the source of most of the film's grating attempts at humor, as the three Indian transplants slowly acclimate to this crazy American lifestyle of fancy cars, a thousand TV channels and free pizza delivered right to your front door. 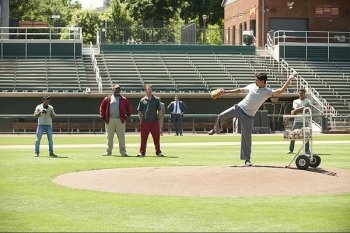 I don't think that arm costs a million dollars. It just looks like a normal arm.Sure, there's still some baseball involved, but it takes a distant backseat to domestic shenanigans at JB's house. Bill Paxton briefly pops in and out of the film as the boys' coach, but we don't get to spend enough time with his character to really grasp how weird he's supposed to be. Don't you just love having to take somebody's word for it when they tell you how weird this one guy they know is? I haven't played baseball since I was nine, but Tom's coaching methods seem pretty reasonable to me.

I hate that I made it this far into the review before mentioning the film's only notable female character. Brenda (Lake Bell) is the tenant renting out JB's guest house, which is more or less an excuse for JB to have a live-in love interest. While Lake Bell is perfectly fine in the role, she isn't given anything particularly important to do besides falling in love with her landlord. She can't even be said to be the film's lone voice of reason, as she quickly joins the chorus of characters all trying to teach JB the same lesson about fatherhood.

What's endlessly frustrating about Million Dollar Arm is that JB never, ever seems to learn this lesson. In fact, he keeps learning it over and over, and constantly winds up forgetting it somehow. Throughout the film, JB overestimates Rinku and Dinesh's ability to do anything for themselves, and realizes he must dote on them like a parent at all hours of the day. Someone flat out tells him this when he brings them to America, and he ignores it. "They'll be fine," JB says. "They're adults." Nope, these two Indian teenagers might as well be toddlers in the eyes of America.

This is because Million Dollar Arm isn't actually the inspiring story of two teenagers from India finding success in America, no matter how badly the marketing would want you to think so. It's actually the less inspiring true story of Don Draper learning what it means to be a single father while balancing his work life with his social life. Was anyone asking for "Mad Men for grade schoolers"? Because that's exactly what they gave us.

Million Dollar Arm is at least interesting to watch in its first act, as JB tours India in search of the film's namesake arms. While director Craig Gillespie paints the country with the broadest of brushes, at least it's a nice change of scenery before we return to the endless sea of strip mall parking lots that is Los Angeles. We first see India through JB's eyes, and the film flounders in keeping that point of view upon return to the US. Million Dollar Arm would have been better served focusing on the two Indian kids who defied the odds and became star baseball players. Instead, we're left with a family friendly ode to the American businessman who exploited them for his own gain and never thought twice about it.

MINORITY REPORT: I bet you could get human arms way cheaper than one million. You want an arm? Want me to get you an arm? I'll get you an arm. Let me just make a phone call here... - Ian "Professor Clumsy is a Retard" Maddison