EXPECTATIONS: Now that Adam Sandler isn't even pretending that his movies aren't just excuses to take his friends on vacation using sweet sweet product placement money, it's safe to assume this is just "Adam's Safari Video With Special Guest Drew." Now doesn't that sound nice? There's no possible way that could turn out obnoxious or disgusting or inexplicably racist, right? Oh, and I'm sure there's no way they'd be crass enough to shoehorn a bunch of references to the fact that these two work together all the time! ("All the time" meaning "three times in twenty years" apparently.) No, I expect nothing but the utmost class and culture from Mr. Adamus Thelonious Sandleronski. Also, much like Drew Barrymore's character in 50 First Dates, I now love and respect Adam Sandler due to my massive brain damage! 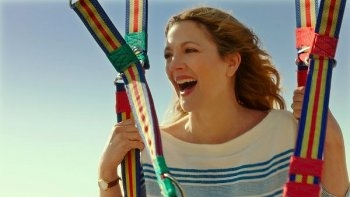 REALITY: Have you ever seen a picture of Adam Sandler at a red carpet premiere of any of his movies? Here he is at the premiere of That's My Boy. This is him at You Don't Mess With The Zohan. And in case you still aren't tired of looking at Sandler's dorky mug, this is him at Funny People. I know this is part of Sandler's "Everyman" schtick, and that celebrity worship is stupid and shallow blahblahblah... This may even be hypocritical of me, but Sandler doesn't care, so why should I? There are ridiculously few moments in an actor's life where they are held to expectation or requirements, public appearances such as these are one of them. Wearing a nice suit to these events is basically a uniform. Sandler knows this, but most of the time he simply can't be bothered, like he wants to show how he's too cool for his billion-dollar career. Well, the people who work at Best Buy don't want to wear those horrible khaki/polo combos either, Adam, but it's their friggin job. Your job requirement is that when you go to the Oscars Golden Globes Nickelodeon Kid's Choice Awards MTV Movie Awards, you wear a shirt with a goddamn collar.

I'll explain the purpose of that scathing critique of Adam Sandler's fashion sense in a few minutes, but first let me introduce this newest abomination of his. After a blind date which ends in disaster (because it's between two horrible, unlikable people), mopey schlub Jim (Sandler) and anal-retentive Lauren (Barrymore) attempt to go their separate ways, but a series of coincidences keep throwing them together. Eventually they learn that Lauren's friend Jen (Wendi McLendon-Covey) has split up with her boyfriend Dick, who happens to be THE Dick of Dick's Sporting Goods (official sporting goods sponsor of Blended"), leaving behind an unclaimed family vacation to South Africa. Jim and Lauren each have the idea to buy half of Dick's tickets for Spring Break, throwing them into a Brady Bunch-style retreat for blended families.

Speaking of which, for a movie about families, it sure was easy for me to describe the plot of this movie without mentioning the children once, wasn't it? There are five of them, by the way. Three girls, two boys. The girls have stupid haircuts and the older boy is basically a live-action Steve from American Dad, and that's all the characterization you really need. 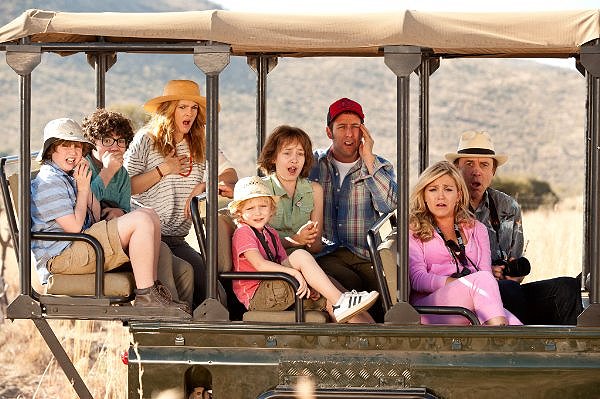 Oh, they're all having a great time!


Credit where it's due, the non-Africa scenes of this movie aren't that bad, and there is a surprisingly large amount of them. They're not particularly funny or interesting, but there's nothing outright egregiously offensive about them either, which is all I can really hope for under the circumstances. (There is one gag about Lauren's closet-organizing business being called "Closet Queens" because she and Jen are supposedly lesbians, but that joke doesn't even make sense, so I can't get angered by it.) I can't even get angry that the film is constantly making excuses for Sandler's character's behavior, because at this point that's just going through the motions of an Adam Sandler movie.

When we reach Africa though, we are treated to a series of "zany antics" and "wacky characters" which really aren't either. Oh-ho, Adam Sandler is riding an ostrich. Whoa-ah, Drew Barrymore just ran into a rhino. Ooh-ooh-look, the silly black people are singing and dancing for our entertainment, this is clearly what Africa is like, correct? Nothing but lions and witch-doctor ceremonies throughout the entire continent! Honestly, I'm even willing to forgive the moment where the entire cast gets on stage for a full on tribal dance with drums and leggings, because the movie takes place inside of a resort that's basically a Hawaiian luau. This is supposed to be White Tourist Africa, this is Gentrified Africa, clearly not supposed to be indicative of what Africa is really like and... why am I defending this? This is racist as fuck.

Blended's biggest issue, however, is that it can't quite commit to offensiveness or sentimentality, and as a result, it fails at both. Barrymore and Sandler each get a few nice moments of bonding with each other's respective children, but as a whole, it's really half-hearted and boring. This is what happens when you're just coasting off the supposed chemistry your stars had twenty years ago, no one is putting forth any effort, and it's not fun or interesting to watch. 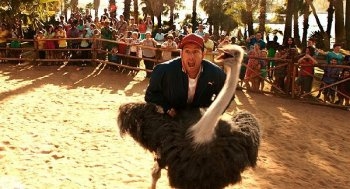 Oh boy, what a riot!This is what I was getting at with the analysis of Adam Sandler's wardrobe earlier. This is a man who has spent the majority of his career refusing to put on his Actor Pants, both on-screen and off. What makes it all the more infuriating is that we've seen before that he can, he just doesn't want to. When Blended tries to take a hard-turn into dramedy-ville, it actually becomes the funniest part of the movie. There's a scene here where Sandler's character comforts his crying daughter who is learning to let go of her dead mother, and the whole time Sandler is out-acted by a literal 11-year old girl. This is Sandler's "Jeans at the premiere" style, and it doesn't work for everything... or anything, really. He's not even pretending to be an actor anymore, which would be fine, except that's what we're literally paying him millions of dollars to do.

Believe it or not, I don't hate A-Sands. He's actually fascinating to me, because he's one of the few celebrities that comes to a role not just as an actor, but brings an entire public persona, making him strange bedfellows with the likes of John Wayne and Arnold Schwarzenegger. But the strange thing about Sandler is that the public aura he carries with him is one of "anti-persona," a rallying point for the insecure belligerent manchild. His "jeans and Jets shirt" motif is a carefully calculated PR move, one that comes out of a place of self-loathing, if Funny People is to be believed.

This is key to why Blended's attempt at family comedy doesn't work, and why it's so frustrating that it possibly could. In a parallel universe, Blended could be made with literally anybody but Adam Sandler in the lead and it would at least make a passable film. (Joel McHale is actually in this movie, he's right there, you could use him.) But you could even keep the Adam and his Friends movement and make something interesting with one essential change: Don't make it a love story.

Sandler and Barrymore do not work as a believable on-screen couple anymore. They did in The Wedding Singer because they were both actually acting then, and they kind of did in 50 First Dates, because at least Barrymore was acting then. Here, it's just Adam and Drew, and if you removed the forced romance, the two of them have incredibly believable chemistry as a pair of best friends. There are virtually no films about men and women being platonic friends, and if these two are committed to the Sweatpants Method of acting together, then let's let them be the pair of close friends that they assumedly are. We'd get something remotely interesting, Sandler still wouldn't have to act, Drew Barrymore gets to remind us all that Drew Barrymore exists, everyone wins.

Well, apart from it still being totally racist I mean.

MINORITY REPORT: Terry Crews is one of those great comic actors who will basically do any role he's offered. On the one hand, I respect the man's work ethic. On the other hand, would it kill him to say no to something every once in a while? - Joseph "Jay Dub" Wade