We're looking at planes, aging movie stars and Oscars this weekend. First up, Ian "Professor Clumsy" Maddison is baffled by the mixed messages of Non-Stop, then Joseph "Jay Dub" Wade enjoys the animated biopic The Wind Rises and Martin R. "Vargo" Schneider has 3 Days to Kill the new Kevin Costner vehicle. To top it all off, Joseph and Current Releases' friend Libby "Gentleman Loser" Cudmore give their Oscar predictions for the gambling addicts among you.

EXPECTATIONS: Ever since some people flew some planes into some buildings a few years back, the anxiety about flying has been well and truly exploited in cinemas by having movies present scenarios in which unexpected things appear on planes. This time around, we have Liam Neeson on a plane, unexpected because the last time he did that it didn't end well for him. I like to think Non-Stop is the story of Neeson taking revenge on planes for what they did to him in The Grey.

REALITY: Remember when Liam Neeson was a prestigious leading man, renowned for his powerful screen presence and imposing physicality? Remember when he was in Rob Roy, the infinitely more interesting alternative to Braveheart? Remember his pivotal performance as Michael Collins in Neil Jordan's biopic of the same name? Remember when he was nominated for an Oscar for his performance in Steven Spielberg's holocaust drama Schindler's List? Remember how, in 2008, he appeared in the ridiculous, self-critical Taken and surprised everyone with his martial arts and telephone threatening skills?

This doesn't look good, Liam. They're not going to give you your job back after this.


How is it, then, that post-Taken Neeson has become something of a joke? That neutered, homogenised and yet somehow still brutally violent action vehicles have become the mainstay of his career so late in his life is utterly bizarre. He's gone from beloved thespian to ironically enjoyed action star so suddenly that now movies like The Grey seem like the exceptions to his usual fare and even put off his newly acquired hip, young audience. They'll be happy to know, at least, that Non-Stop is appropriately uninteresting, politically questionable and needlessly violent.

Neeson plays Federal Air Marshall Bill Marks, an alcoholic racist who is allowed to carry a firearm on an aircraft. On a long flight to London, he receives a series of threatening text messages telling him that a passenger will die in exactly twenty minutes if 150 million dollars are not transferred into a specified bank account. Marks enlists the help of flight attendant Nancy (Michelle Dockery) and trustworthy civilian Jen (Julianne Moore) to help him find out which of his passengers is sending the threats.

So it's a kind of mystery thriller on a plane with some Die Hard thrown in for good measure and it makes for a rather odd experience, but not an unpromising one. We begin with a rather cinematically inventive sequence as we gradually learn about Marks, his drinking problem, his racial prejudices, his relationship with the cabin crew, his daughter and finally his job. These elements are all drip-fed to us through simple visual cues. Not subtle, certainly, but it's a very cinematic way of establishing a character. It's a shame that the film doesn't keep up with this and deliver a more character-driven piece, but it soon segués into ludicrous plot twists, red herrings and mixed messages. 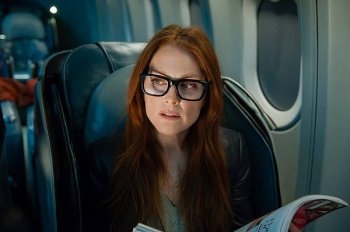 Oooh, I bet it's her!One central element of the plot has the mysterious texting terrorist piling evidence against Marks in an effort to make it look like he's finally snapped and hijacked a plane. Because that's what happens when you let a drunk racist carry a firearm on an aircraft. The film plays this element up at times, making the audience question the sanity of the supposed hero and the reliability of the visual narrative. Are we seeing a warped image of reality through the eyes of a sick drunk or perhaps a well constructed lie that is going to irritate us all when the end comes? Obviously this cannot last, just as the inventive opening sequences cannot be carried throughout the film. Marks' mental state is hand waved away after an impassioned speech and his racial prejudices all vanish as if by magic. I suspect that this is a side effect of the script having been through multiple rewrites, certain elements get picked up and dropped and thematically interesting ideas remain only in fragments to drive the plot. I also suspect that a lot of these rewrites happened when Liam Neeson took an interest in starring.

As you can tell, it's a mess that squanders its best elements because, hey, it's a Liam Neeson vehicle now. "Liam Neeson vehicle" used to mean Oscar bait period drama or political biopic, but now it's just a twitter meme. Go over to twitter now and search "Liam Neeson punches a" and you'll see what I mean. The third act of Non-Stop plays up to this expectation perfectly and to the major detriment of the film as a whole. Liam Neeson, yes, does indeed punch, of course, the passengers, that's right, on a plane, certainly. At least one of those passengers is a terrorist too.

Now, about those terrorists... You'll remember how the villains in Die Hard were established as terrorists and then revealed some time later to just be after money. They do that because, in an action movie, there is a very definite shift in power dynamics. At the beginning, the villains have the power and it can be possible for audience members to perhaps agree with their cause, if not their methods. As the balance of power shifts and John McClane starts to systematically murder the bad guys, the film runs the risk of alienating a part of the audience who might see this violent response as a staunch political statement. By turning them into simple greedy opportunists, you de-politicise them to an extent.

Non-Stop makes the reverse move; turning the money-craving opportunist into an actual terrorist with a political agenda, albeit one that doesn't make much sense. One could almost understand the wrong-headed reasoning of our mysterious terrorist buddy, rebelling against the American culture of anti-terrorism by validating it with an act of terrorism on a British airliner headed for London, when you see that it maybe is a result of PTSD compounded by already-existing mental issues and can be treated with methods other than being shot in the face by Liam Neeson. There's nothing inherently wrong with alienating your audience -- I do it all the time, after all -- but you can't expect to keep an entire multiplex audience, especially an international (read: non-American) audience interested when you make a bizarre political statement through movie violence. Even more so when you seem to be trying to vindicate racial profiling and an over-zealous obsession with national security.

MINORITY REPORT: "Liam Neeson Punches a..." isn't just a meme, Ian, it's an entirely new subgenre. Somehow, this ludicrous power fantasy from six years ago has stood way longer than any of us could imagine, and this is what's truly terrifying and humbling to us film critics: The idea that a film need not necessarily be great in order to become culturally significant. Sometimes it just needs to be easily accessible and highly quotable. Having Key and Peele on your side helps, too. - Martin R. "Vargo" Schneider