EXPECTATIONS: With Ridley Scott at the helm, a screenplay written by celebrated novelist Cormac McCarthy, and a gaggle of A-list actors in front of the camera, The Counselor has more than enough talent at its disposal to make it one of the most engrossing crime thrillers of the year. That, however, has not stopped critics from clubbing this film like a baby seal. The trailers don't do a very good job of telling us exactly what the story is here, so maybe the critics are onto something...

REALITY: The Counselor is, without a doubt, one of the most frustrating films of the year. It's frustrating not only because Scott deftly directs the hell out of a threadbare story, but because McCarthy's script seems so defiantly intent on making that story as obtuse as possible. The direction and the script seem wholly at odds with one another, and the cast alone struggles to save it from collapsing under the weight of its own pretense.

John Q. Counselor (Michael Fassbender) is a successful Texas lawyer who sets out to make a better life for himself and his fiancée (Penelope Cruz). When he decides to involve himself in a million-dollar drug deal, his partner Reiner (Javier Bardem) warns him of the dangers involved. Among these dangers is Reiner's girlfriend, Malkina (Cameron Diaz), a calculating and terrifying woman who delights in watching her pet cheetahs chase down jackrabbits in the desert. 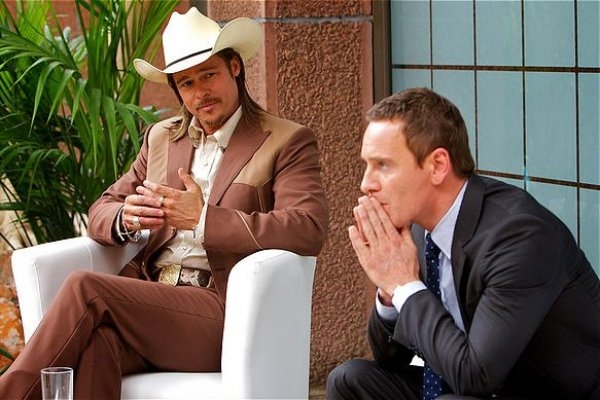 Which movie are we doing together tomorrow?


Reiner's warnings are echoed by an impeccably dressed cowboy named Westray (Brad Pitt), who acts as the middleman between the counselor and the drug cartel. Westray tells him what these cartels are capable of, including a Chekhov's Gun in the form of a portable strangulation device. When a good deed backfires on him, the counselor is marked for death, and he does everything in his power to escape with his life.

Nominally, that's the narrative arc of the film. Many of these twists and turns in the plot are not laid out for us quite so transparently. Much of the actual plot is inferred through dialogue or by witnessing the resulting chain reaction unfold. Upon the counselor's first meeting with Reiner, for example, the deal is already well underway. In fact, it's not until an hour into the film that anyone even makes clear exactly what is going on.

Despite being a Ridley Scott production, the real auteur here is the pen of Cormac McCarthy. His screenplay is almost entirely driven by dialogue, and several pivotal scenes involve one character delivering a monologue about the natures of evil or greed or whatever the topic of the moment happens to be. After a while, it becomes clear that this is all the film has to offer.

While the prose itself is vivid, it's jarringly out of place coming from some of these actors. Diaz fares the worst, robotically declaring ominous platitudes like "I don't think I miss things." Ruben Blades makes an appearance as the cartel boss just long enough to read a couple pages of the script to the counselor over the phone. So many tertiary characters pop in and out of the film without explanation that it's difficult to keep track of who's who and even what purpose they serve. 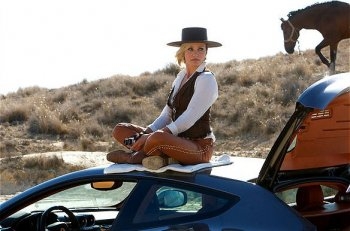 Is there some reason that Cameron Diaz seems so intent on proving that she is actually American lately? Have Republicans been demanding to see her birth certificate?Before he attempts another screenplay, someone really ought to sit McCarthy down, and give him the Harrison Ford/George Lucas talk. "Cormac, listen. You can write this shit, but you can't say any of it. No one is going to buy that these characters are actually people, because every last one of them sounds like you."

It's telling which aspects of the crime genre McCarthy decides to concentrate on. Namely, he intentionally keeps us away from the sort of decision-making and plot movement that we typically expect from stories like this. Scenes in which two parties sit down to hash out a deal, or to explain the scheme over a montage of toadies carrying it out, are nowhere to be seen here. It's assumed all of that is either over and done with, or simply happening somewhere else.

While the wealthy folks discuss other people's schemes over expensive drinks and in wild outfits, we do witness the plan unfold in the form of grimy, blue-collar workers trucking goods across the border and back again. Few words are exchanged, and we never see the two groups intermingle. It's a blunt, effective means of illustrating the best-laid plans of the haves vs. the unwavering work ethic of the have-nots.

What we're left with, then, is a film about a man who thinks he knows how these things are supposed to go down, only to find himself in way over his head and on his way to a grim reckoning. In that sense, The Counselor is almost a meta-narrative for McCarthy breaking into screenwriting. He knows how to tell his stories, certainly, but insisting on doing things his way leaves this film feeling woefully out of sync with the rhythms of visual storytelling.

Ridley Scott and his cast can only do so much to right this ship, and for their part they manage to pull it off. Fassbender plays up the counselor's naiveté well in the early going. He's downright lovable at first, but as the film wears on, he begins to sell it a little too hard. And Javier Bardem's Reiner becomes the spike-headed sleazebag we almost want to root for. Almost. Eventually, The Counselor makes it clear that there is no one worth rooting for in any of this. Greed exists everywhere, and Cormac McCarthy's greed over his own prose is what winds up sinking this film.

MINORITY REPORTS: As a reminder, Nicholas friggin Sparks once called Cormac McCarthy's work overwrought and melodramatic. Let this film serve as evidence that even when this is the most true, McCarthy still has the distingushed honor of not being Nicholas Sparks. - Martin R. "Vargo": Schneider