EXPECTATIONS: I've always loved Jackass -- not just for the stunts, but for how the cast and crew react to the stunts or how the cast and crew reacts to marks reacting to the stunts. And in the three movies, all of which I saw opening night, the "old people behaving badly" segments were among the best, frequently asking people who aren't in on the joke to reexamine social norms and decide how long they will let an awful situation escalate before they intervene. But is that enough to sustain a feature-length movie?

REALITY: If Bad Grandpa didn't try to shoehorn pathetic attempts at emotional resonance into a loose collection of sketches, this would be among the best documentaries of the year. I've never felt that way about a Jackass film before, but there you have it: By following the exploits of 86-year-old Irving Zisman (Johnny Knoxville) and his eight-year-old "grandson" Billy (Jackson Nicoll) as they fuck with clueless bystanders, Bad Grandpa becomes a fascinating study in social psychology and captures something true about America circa 2013. 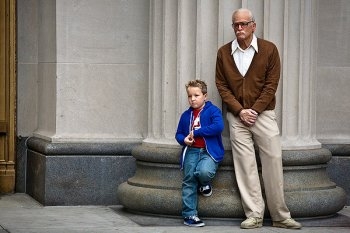 You'd cross the road if you saw those two hanging around.It's been fifty years since Stanley Milgram concluded his experiments, and -- Bad Grandpa argues -- little has changed. Now more than ever, the average American is indifferent, easily swayed into committing criminal acts, and more likely to use his or her cell phone to document a crime than call for or offer help. Two early sequences illustrate this. Improbably, Irving gets his dick stuck in a vending machine and, as he begs for help, people walk by, laughing. One guy snaps a picture with his phone. More improbably, Irving calls on a pair of furniture movers to help him get his recently deceased wife's corpse (Spike Jonze) from his bedroom to the trunk of his car so he can "take her down south." They do it without question. Once the trunk is closed, Irving and Billy thank them for being an accessory to a crime as the movers hastily retreat to their truck.

Elsewhere, Billy wanders around the streets of St. Louis looking for his missing grandfather. Few offer to help. Most give him that "kids say the darndest things" look that should be familiar to fans of Bill Cosby's pièce de résistance...or people who have seen an earlier sequence in which Billy talks about his mother's drug addiction ("she likes crack like I like fishing") with strangers. Oddly, the people they encounter seem most likely to intervene if a) Billy's drinking a beer or b) Irving is destroying their property. That's what drives Bad Grandpa, which explores the social leeway we give to children and the elderly. Why do people more or less give Irving a pass for his unpardonably lecherous come-ons ("I can no longer stir the gravy, but I can still lick the spoon") or quips that sometimes border on racist? Why is it that the only people who seem wise to Irving's shtick are the black female patrons of a male strip club? Maybe because marginalized recognizes marginalized. Most of the white people in Bad Grandpa put old perverts and white-trash kids in boxes, but the black women see through the bullshit.

Bad Grandpa would inspire outrage, both for the truths it captures and the horrors to which it subjects unwitting participants, if it weren't so funny and the butt of every joke weren't the cultural dominants. For most of its 92 minutes, the film sidesteps our taboos regarding profanity-spewing children by presenting material that's a great deal more shocking, most of which involves prosthetic genitals, abuse of a corpse and -- in the only scene that might qualify as harrowing -- child abuse, as Billy's shitty drug-addicted "father" makes a few too many comments about his son's weight and faces off against a biker organization with a Big Brothers Big Sisters-like agenda.

This is Jackass minus the pain -- well, most of the pain anyway -- and a film that finds the balance between the extremities, falling somewhere between the just-for-yucks of Candid Camera and Borat's savage exploration of America's worst. That's what makes this film the best of those: By skewing more towards the middle, we're not given much distance from the subjects at whom we're laughing. It's easy to mock ignorant rednecks as they sing "Throw the Jews Down the Well," but it's difficult to fault a guy for getting uncomfortable when a strange orphan starts following him around and calling him "Dad" -- until a few minutes after the sketch is over, when you realize the guy probably should've expended a little more effort getting the child to safety instead of looking for the quickest exit. 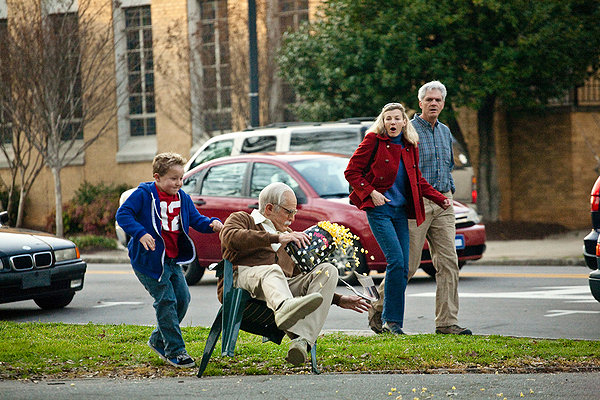 
Knoxville is his usual charming self, the gleeful god of comic mischief with his trademark ingratiating laugh, but Nicoll, with more limited screen time and playing second fiddle, is the real star of Bad Grandpa. With a precocious gift for improvisational humor, he somehow manages to keep up with Knoxville, who has four times as many decades and movies under his belt. Nicoll also manages to keep his cool during the film's climactic stunt, which proves that North Carolina pageant moms still haven't managed to catch Little Miss Sunshine on basic cable.

Bad Grandpa's biggest misstep, then, is the merging of its fictional plot with real people. Other films, like the recent Escape from Tomorrow, have done this more seamlessly. Here, the marketing and the pedigree of the film make it clear that whatever plot there is exists only to string together stunts and pranks. And yet there's a weird moment in which the creative team (which includes Knoxville, Jonze and regular Jackass director Jeff Tremaine) try for drama, as if the audience could pretend this is a narrative film and give a shit about the characters. Maybe fueled by praise for the meta-context of Jackass 3D -- the entire cast and crew pledged sobriety as a show of support for Steve-O, a recovering addict -- Knoxville & Co. decided to aim for semi-touching with Bad Grandpa's central conflict, in which Irving must finally decide between returning Billy to his abusive "father" or adopting him as his own, but the conflict falls flat and invites some unnerving questions about a larger meaning behind Bad Grandpa.

Framed this way, we're supposed to accept that Irving's hijinks are innocuous and nurturing when contrasted with the abuses of a junkie father, but they're not. At best, that is a "lesser of two evils" choice. Is a child better off suffering his father's endless comments about his weight or pretending to be a missing child to amuse his grandfather? The answer, I humbly submit, is neither. Yes, the Jackass folks seem to share some wonderful friendships, and maybe snorting wasabi with his buddies was exactly what Steve-O needed to get clean, but he's also an adult -- not a mature adult, but an adult nonetheless. The whole draw of Bad Grandpa is that it's all a gag and the audience is in on the joke, seeing a little bit of themselves in the people subjected to the cruelties of a leering creep and his beer-swilling grandchild. Once the filmmakers drop that mirror and pretend these characters actually exist in a moral framework of their creation -- a framework in which it's OK for children to get drunk on cheap beer, punch gramps in the balls and call random passersby assholes -- we're left to check the casting of an eight-year-old boy against the limits of our own morality. And maybe that's the point.

MINORITY REPORT: Bad Grandpa makes the treatment of the children in Ender's Game seem like perfectly acceptable behaviour by comparison. The difference is that the consequence-free simulation here is the film itself and somewhere out there is a concerned group of angry point-missers who are petitioning for this poor child to be taken away from his family. - Ian "Professor Clumsy" Maddison