EXPECTATIONS: This is a film that is exploding with hype and buzz and pazow and shazam and other words created by men in marketing rooms, but in this case it certainly feels as though it is deserved. Indie genius Steve McQueen is ready to break onto the mainstream and he's taking the long-time secondary man Chiwetel Ejiofor with him. Realizing that most of America don't know who those people are by name (or by the name of an entirely different person), the movie has also packed itself with a hell of an ensemble, including Paul Giamatti, Benedict Cumberbatch, Brad Pitt, Paul Dano, and McQueen's buddy Michael Fassbender. I realize that this whole paragraph has basically just been a list of names, but it's a list of names that really makes me want to see this movie.

REALITY: When we as audience members demand more "realism" in our films, we are often overlooking the fact that reality is often ugly and unwieldy, that it reveals more than we usually want to know about the world. Reality is uncomfortable and sometimes shameful. Reality is also incredibly detailed. Ridiculously, unyieldingly, probably needlessly detailed. I am of course no longer talking about reality as a concept, I am talking about this movie. 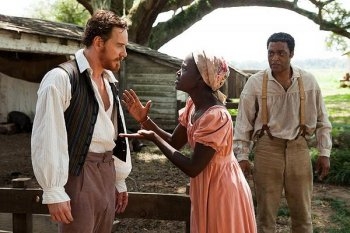 Nothing drives home the horrors of slavery quite like over-the-top melodrama.

12 Years a Slave tells the true story of Solomon Northup (Ejiofor), a free-born and educated Northern Black musician who is deceitfully kidnapped and sold into slavery in the 1840s. Unwillingly settling into his role of "Platt," his supposed identity, he gains favor in the eyes of not-so-bad-considering-he's-a-slaveowner Master Ford (Benedict Cumberbatch), but is forced to transfer plantations after an altercation with overseer Tibeats (Paul Dano, meaning we get another film wherein the best part is watching Paul Dano be mercilessly slapped around). From there he goes to the cotton farm of Master Epps (Michael Fassbender), where he plays witness and secondary-party to the sadistic game Epps plays with his workforce, particularly his repeated victimization of fellow slave Patsey (Lupita Nyong'o). This continues and worsens and Solomon grows bleaker and more broken until a chance meeting with an abolitionist carpenter (Brad Pitt) sets events in motion that eventually return Solomon to freedom.

That is essentially the whole story, and it takes place as you may have gathered, over a span of twelve years. For us, this is two hours and fifteen minutes, during which McQueen shows no signs of slowing down or skimping on the details of Northup's journey. Steve McQueen's greatest strength in this film, what escalates it in its greatest moments, is his unrelenting commitment to showing things as they are, no matter how brutal. Through the most horrifying and miserable moments of the journey, McQueen is unflinching. He frames Chiwetel's expressive face in times of agony and of singing and acceptance, and he just will not cut away. This is a fearless gamble from an exciting filmmaker, and in the moments where it works, single shots become transcendent over the rest of the film, and over many lesser works of drama. If this sounds like Passion of the Christ-esque exploitation of agony, it kind of is, minus the sanctimony. Whereas that film revelled in the whippings and beatings and almost celebrated it, McQueen's intention is to frame it as shameful, refusing to let the audience look away.

The film, then, is haranguing to watch, but these select moments are so good that it almost doesn't matter. What does matter and the reason this film loses points from me is that, along with this commitment to reality, there's also a painstaking attention to detail that makes the movement of the story something of a chore. It takes us well over an hour to get Solomon to Epps' farm, which is where the majority of the film's conflict is supposed to take place. Throughout we explore every single character that was ever mean or nice to Solomon, and take plenty of sidesteps to remind us that, yes, this is deplorable. At one point Garret Dillahunt shows up to throw in some 99%-er subtext, do something crappy, remind us that we should be watching Raising Hope and leave. As excited as I am that Dillahunt is on a screen, it's honestly just not necessary. A film that is already putting the audience through the wringer should not also be pressing us with meandering storylines throughout. I understand that the idea is to hammer in how frustrating and futile Solomon's story seems, but by the time Brad Pitt arrives on screen, you breathe a sigh of relief, knowing that something is finally developing. 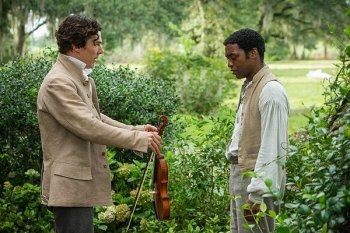 Just a reminder: world's sexiest man.Most of my objection to this comes from the fact that for the first time, a Michael Fassbender performance fell completely flat for me. Fassbender plays Epps somewhat pitifully and buffoonish, bordering on caricature. If Chuck Jones put Yosemite Sam in charge of a plantation, we would have Michael Fassbender's performance, and I'm not even 100% sure that doesn't already exist. Only once does he become genuinely scary, and this is one of the aforementioned "don't look away" moments of the film. I realize that this is historical record and therefore untamperable, but Master Ford and Tibeats were truly better antagonists, because Ford had the true evil of realizing Solomon's sovereignty and completely ignoring it. Of course, I may just automatically assume the worst of any Cumberbatch character.

There's something strikingly odd about Chiwetel Ejiofor's performance as well. Most of his lines are delivered so excessively wrought with the gravity of the situation, the scenes he has interacting with his fellow slaves come across more like he's on a stage than a screen. I have used this same logic to defend actors such as Nicolas Cage in the past, so it's not a bad note at all, just slightly odd. It's a bit jarring, again, that a film so committed to hard-hitting reality would border on the edge of melodrama in its delivery. Slavery is dramatic enough. This is likely why Ejiofor's best moments in the film are wordless, or sung. The man's greatest strength is that he can sell the story in his face, and he does it here almost effortlessly.

Steve McQueen is an admirable filmmaker with a potentially amazing career ahead of him. He makes the kinds of films that aren't often seen in theaters, and perhaps that's why this movie is so hard to categorize. While it's not quite the groundbreaking powerhouse I had been led to believe from the festival circuit, 12 Years a Slave is a still a remarkable, worthy film. It just also happens to be a frustrating one.

MINORITY REPORT: "I'll have you know I studied only the finest of Southern mannerisms to make sure my character was as authentic and realistic as humanly possible." - Michael "The Counselor" Fassbender