Runner Runner; Don Jon; Cloudy With a Chance of Meatballs 2

We have two Movies of the Week this week, so you'll have to make a decision on your own for once. The only movie this week that isn't one of the Movies of the Week is boring Justin Timberlake vehicle Runner Runner. Lifting your spirits however, are Joseph Gordon-Levitt's directorial debut Don Jon and animated sequel Cloudy With a Chance of Meatballs 2.

EXPECTATIONS: Sometimes you just can't wait for a film to be released. There are two different reasons for this to happen. The best reason is that your own excitement for the film is too much to bear and every reminder that it is on its way is one more tease to build you up, usually into disappointment. In the case of Runner Runner, it is simply because of the marketing saturation that the damn film has been getting. Please hurry up and release this film so I can stop watching that trailer before every single movie. You know the one, where Gemma Arterton is second billed, but apparently doesn't have enough impact on the film to warrant actually appearing in any of its marketing footage beyond two shots of her looking lustfully over her shoulders at a painfully arrogant Justin Timberlake while Ben Affleck feeds people to crocodiles and tries his hardest to chew scenery.

REALITY: It won't surprise you at all, and it certainly did not surprise me in the least, to learn that I didn't much care for Runner Runner. It is dull, first and foremost. What you might think is a snappy 91 minute running time makes way for an absolutely bizarre sense of pace. Long scenes of dialogue make way for more long scenes of dialogue, but supposedly important characters come and go in the blink of an eye. It seems that the actual story of Runner Runner could be told in about five minutes, so they bloated the screenplay with poker analogies, tough-guy monologuing and weird sexism. 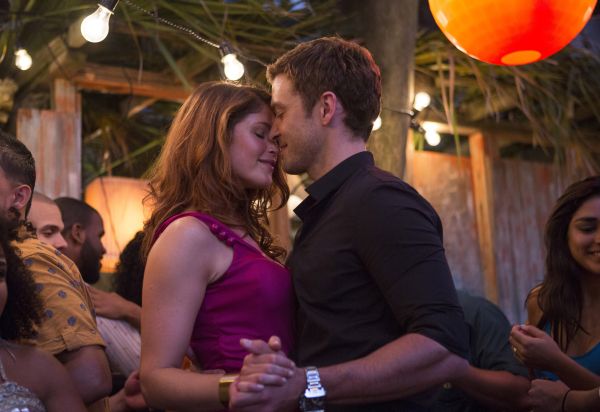 
When student Richie Furst (Timberlake) is having difficulty paying for his tuition due to his previous income from a poker website and being threatened by his college Dean to stop doing his job as a marketing liaison to an Poker website, he decides to gamble all of his savings on a poker website and loses. Deciding that there's no possible way that he could have lost his money fairly, he somehow flies to Costa Rica to confront the site's CEO Ivan Block (Affleck) in order to get his money back. Block is so impressed by Furst's arrogance that he immediately gives him a job as his right hand man, bribing officials, blackmailing potential business partners and taking beatings as needed. Then, to throw a spanner in the works, FBI Agent Shavers (Anthony Mackie) approaches Furst and tries to get him on side to take down Block.

Cast your browsers back to my review of The Incredible Burt Wonderstone and you'll be reminded of the simple little test I like to conduct with films. If your film has only one female character, go ahead and see if you can recite the plot concisely without needing to mention her. Well... I just did. In fact, not only did I manage to do that, every piece of marketing connected to Runner Runner seems to have the same problem. Even the synopses on every cinema website I checked can't seem to fit Gemma Arterton's character into the actual story of the film. Maybe she isn't even in it?

Well, she is. I remember. I saw her. There is a woman in this film. Unfortunately, Runner Runner left me slightly confused as to just what a woman is. Sometimes I think that they're people, but then I keep seeing movies where they're not. Gemma Arterton plays Rebecca, Ivan Block's personal assistant who falls in love with Richie. That's it. They try to play her up like a strong, independant woman, but at the end of the day she is little more than a prize to be contested over by the two arrogant leads. Want to place a bet on who "gets the girl" in the end? 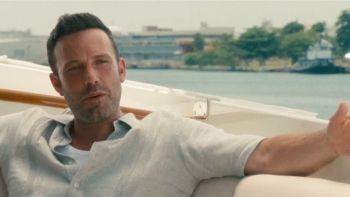 Hi, I'm Ben Affleck and I'll be trying my absolute hardest this evening.She may be the only female character with any dialogue or a name, but there is a female presence in the film besides her and it naturally takes the form of background sex objects. Women are set dressing. Even in early scenes, Runner Runner takes an entirely sincere approach to the attitudes towards college girls that is so thoroughly lampooned in The Social Network. Remember that? "We're ranking girls." "You mean other students?"

Justin Timberlake was in that too, I imagine he hasn't forgotten. In Runner Runner, college girls (to use the language of the porn-obsessed virgin for whom "college" exists only as a descriptor of one of many types of girl who will never have sex with him) are seen doing nothing more than observing from the wings as the proactive, studious college men who do things, talk to each other and sit on chairs. College girls cannot use chairs, you see? The only sitting they are allowed to do is on the laps of their incredible, arrogant manly college men.

I keep using that word "arrogant," probably in some vain attempt to lend structure to what is essentially an extended rant about a very uninteresting work, but it is part of an unusual trend in modern media, this celebration of arrogance. Intelligence and arrogance, especially in American films and television, go hand in hand. Hyper competency is something we see a lot in cinemas, it used to be what made Sherlock Holmes an interesting character, now it's what makes Robert Downey Jr. such an easy casting choice for Sherlock Holmes. A thriller like Runner Runner is robbed of its tension when your main character's attitude entering the third act is not "How am I going to do this?" but a boring, poker-analogy-filled voice-over explaining "Here's what I did." It's exactly the same issue that killed Now You See Me dead from its opening frames, it's what makes the Marvel Studios films so hard to stomach and it's so prevalent in the genre that The Dark Knight rises presents it as an element of self parody. I think we should have a rule that any trend that was parodied in The A-Team should be off limits to anyone trying to pen an action thriller.

At this point, I had considered it comedically incumbent to use the heavy-handed poker analogies that permeate this film's script in order to segue smoothly into mentioning Ben Affleck. However, I know so little about poker that I had to... fold, I guess? That's what happens when you lose, right? Anyway, Ben Affleck's performance is the shining light in the film and possibly a career best and, by all means, please put that line on the back of a blu ray case out of context. The problem is, here is a man who very clearly called up his agent one day and said "Get me a scenery-chewing bad guy role. I don't care what the movie is, I want to do tough-guy monologuing and antagonise some young movie star. Put me up against whoever the modern equivalent of me from thirteen years ago is." Then Runner Runner happened and he got his wish. Smart move, Affleck. I just wish it had been part of a less interminably dull film.

MINORITY REPORT: So you're saying I shouldn't double down on Runner Runner? That I shouldn't raise my expectations? I should take my apathy for this film and let it ride? I should go...uh...see another movie? -Joseph "Jay Dub" Wade