EXPECTATIONS: What the hell is this? I thought movies about penguins were a fad, and I thought Farce of the Penguins killed it dead in its tracks! Whatever, let us hope this is merely the delayed aftershock of the penguin movie fad, and not the harbinger of more horrors to come. Oh look, a trailer for Happy Feet 2. Go fuck yourself, Irony.

REALITY: Depending on who you ask, Mr. Popper's Penguins is either A) a live action version of an old animated movie; B) a remake of a Don Knotts movie; or C) a movie based on a 1938 children's book. According to Wikipedia, the first two people I asked were dead wrong. Turns out the only person even vaguely familiar with this film's source material is The Internet. 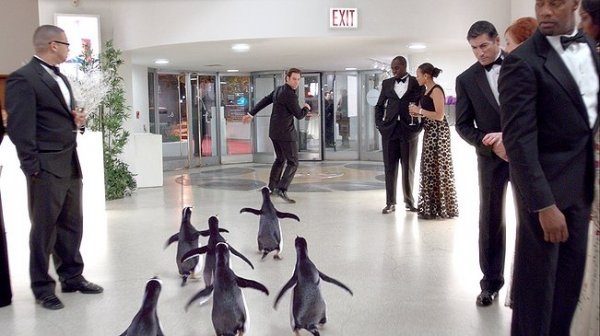 After they catch him, the penguins kill him. Spoilers.

Tom Popper (Jim Carrey) is an up-and-coming realtor in New York City, buying up some of the most expensive real estate in the world, only to have it torn down and rebuilt as an icon of modern bullshit architecture. Upon learning that his globe-trotting, absentee father has passed away, Popper inherits what his father considered a 'special gift': a live penguin. Popper tries to have it returned, only to receive five more penguins by mistake. His kids love their dad's new pets, his ex-wife (Carla Gugino) finds the situation charming, and a local zookeeper (Clark Gregg) finds it appalling that someone is keeping penguins in a plush New York apartment. With the help of his penguins, Popper learns the value of family, friendship, and how to convince a restaurateur (Angela Lansbury) to sell her building to him.

That is certainly a plot, isn't it? That is literally the plot of every single movie that has ever been made. "The main character learns the power of love/trust/friendship when a weird thing enters his/her life." That's King Kong. That's Terminator 2. That's Green Lantern. Hell, I'm pretty sure that's also Marmaduke. There's really nothing distinguishing this film from the thousands of other kids' movies that dot the cinematic landscape other than Jim Carrey and a bunch of penguins. The only way this could've been a more generic, boring movie would be if they'd just said "Fuck it" and titled the film Jim Carrey and a Bunch of Penguins. 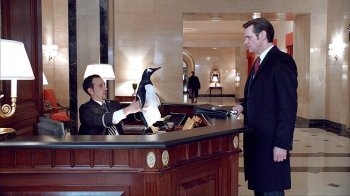 Carrey's expression here just sums up what everyone is thinking.They say that a camel is a horse designed by committee. What they mean is that if you give enough people creative input on a project, the end result will wind up being functional, yet utterly stupid-looking. That seems like the best metaphor for Mr. Popper's Penguins. You've got Jim Carrey doing his thing, and you've got a bunch of penguins doing their thing, yet at some point, a producer said, "That's not enough. What else can we cram into this movie?" So now there's a B-plot about Popper's daughter trying to get a date for The Big Dance (which goes nowhere); there's a C-plot about Popper's neighbor (a fat David Krumholtz) trying to get Popper evicted; it's not made clear until the very end whether Clark Gregg's character is some kind of rare-bird thief or simply a zookeeper; and Popper's assistant (Ophelia Lovibond) has a weird predilection for using every P-word in the dictionary.

All this stuff adds up to little more than 95 minutes of screen-time, and none of it adds up to anything resembling a coherent movie. Jim Carrey spends his every moment on screen with at least one penguin; meanwhile, a whole bunch of weird nonsense is going on in the background. It's like the writers took all the notes from their brainstorm sessions and decided to throw it all into the movie, even if it didn't fit. Much like America itself, Mr. Popper's Penguins is a melting pot of stupid ideas all boiled down into one penguin-flavored stew.

If there's one thing I can actually credit the filmmakers for, it's having the restraint to not make the penguins talk. There's not even a Kangaroo Jack-esque scene in which Popper imagines his penguins talking to him. They shit up a storm, wreak all kinds of havoc and squawk like motherfuckers, but the penguins say not a single word. (Hey, I'll take small favors when I can.) Of course, they may as well have spoken. In lieu of giving voice to the flightless voiceless, the filmmakers gave each penguin a distinct personality. And by 'distinct personality,' I mean 'one thing that each penguin does nonstop.' There's one that farts, one that hugs people, one that's functionally retarded, one that bites, a loud squawker and one that wants to fly.

Thanks to the fact that the penguins are actually penguins and not tiny little people in butler outfits, there is a certain charm to watching six penguins traipse around in a fancy apartment building. Jim Carrey, on the other hand, just looks exhausted. Maybe it's because he's trying so damn hard to be funny; maybe it's because he's getting old; maybe it's because he prepared for this movie by keeping a bunch of penguins in his house and he's just sick of reliving the experience. I couldn't say. All I can say is that Jim Carrey's shtick is clearly going the way of Eddie Murphy's whole career: appealing to kids for a little while, and then straight down the crapper.

Ultimately, Mr. Popper's Penguins is a perfectly inoffensive collection of scenes starring Jim Carrey and some penguins. There isn't very much in the way of plot, but then there doesn't necessarily need to be. It's not particularly good, it's not particularly bad, it just is. This film really only needs to do two things: 1) Get kids to constantly repeat the title of the movie to their parents, and 2) make money. It turns out the first generally leads directly into the second. As soon as he sat down, the kid behind me began chanting "Mr. Popper's Penguins" for at least half an hour. Eventually, he started trying to say it in funny voices, culminating in a pretty spot-on Lou Rawls impression. In retrospect, that was the highlight of the whole evening.

MINORITY REPORT: I am sick to death of penguins. It's time for Hollywood to have a new favorite trendy animal. How about the platypus? 'March of the Platypi.' Yeah, I like the sound of that. - Martin R. "Vargo" Schneider