EXPECTATIONS: Let's face it, Woody Allen's been hit-and-miss for about a decade now. In fact, if you ask most people what Allen's done in the past ten years, they'd say "That movie where Penelope Cruz makes out with Scarlett Johansson." Then there's the fact that Owen Wilson's "Aw shucks, oh hey, I guess I'm the guy that's here, doing this, in this movie!" routine hasn't been worth watching since Wedding Crashers.* Combine those with the fact that marketing decided to cut trailers that make it impossible to tell what this movie is even about, and you can see why I'm not sure what to think as I go into the theater.

REALITY: In a weekend that contains a superhero powered by imagination, and an entire waddle of penguins (yes, that's actually the term for it), somehow Woody Allen's latest is the most fun option at the theater. 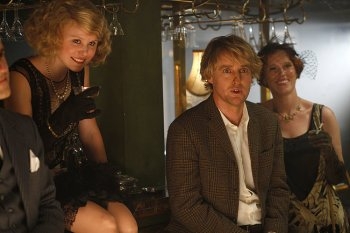 Owen Wilson is Luke Wilson's brother, but he is not related to Patrick Wilson. The more you know...Midnight in Paris follows struggling novelist Gil (Owen Wilson) on his trip to Paris with his fiancee Inez (Rachel McAdams). Gil is not having a good time, as his attempts to do some writing and enjoy the city are constantly foiled by bossy Inez; her right-wing parents (Kurt Fuller and Mimi Kennedy), who hate the French almost as much as they hate Gil; and her pretentious snooty friends Paul and Carol (Michael Sheen and Nina Arianda). While trying to escape for awhile and fantasizing about 1920's era Paris, Gil is picked up in a car and transported back to his "Golden Age," where he meets and spends time with a handful of icons in literature, art, and early film. I'd list them, but part of the magic of the film comes from discovering the new characters and the actors who play them. I will let slip one who stood out particularly to me, though. Allison Pill, best known for playing the drummer in Scott Pilgrim's band, steals every scene she's in as blunt, charming Zelda Fitzgerald. It's a shame the film doesn't do more with her, because in a film that's all about enjoyment, she seems to be having the best time at the party.

Even though it's essentially Night at the Museum for the NPR crowd, Midnight manages to avoid some of the pitfalls films with similar premises have had. Specifically, the problem with magical world-travel films is that rarely are the "real world" segments as entertaining as the magic ones. Allen avoids this by making the most out of his talented cast and actually developing the relationship between Gil and our antagonist, Paul. Wilson's Everyman act works well as a foil for Sheen's perfect portrayal of a pseudo-intellectual. The film also keeps the "Oh wow, how does it work?" montages to a minimum, which is amazing, given that it's well within Wilson's range to say "Oh, wowww, hey, I'm hanging out here, in 1925, but I'm not from this time! You guys are, but not me! I'm from 2011! Ohhhhwhhhoooa!" 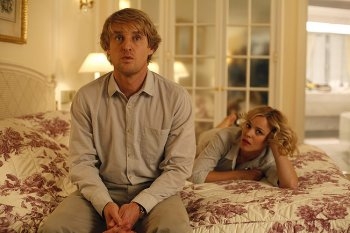 More fun facts: Owen Wilson is usually aware of where he is and what he is doing, in spite of appearances.Visually, the movie is a feast. It's a love letter to the city of Paris, both in the past and today. There's a frantic energy to the 1920's scenes that brings the film to life. Allen also does a few fun things composition-wise in both versions of Paris, such as relegating Gil to the background while the other characters wander around talking about him as if he weren't there. There's a fun juxtaposition here: The '20s scenes are bold and brash, while the present-day ones are subtle and understated.

If anything, my issue with the film is that it doesn't do enough with what it's given. While I would have been content watching Gil bumble around time, meeting a bunch of artists and having even more cameos, this does not make for a compelling narrative. Instead, a love interest slides into place ("We need a French woman for this movie! Get Marion Cotilliard on the phone!") and takes the film in a different direction. Some other subplots are introduced way too late and by the end, the film somehow gets lost within itself, but by that point you don't care, you're lost in it too. The movie seems like it wants to say more than it does. It feels like it's reaching for political commentary, or a remark on classism (Gil's other job is writing Blockbuster, "low-brow" films), but it never quite gets there. But I have no doubt that if Woody Allen really wanted to make these points, he would. Instead, Allen manages to make a film much in the vein of his classic The Purple Rose of Cairo, a beautiful distraction that reminds us how much fun movies can be.