EXPECTATIONS: Over the past few months, I've thought of True Grit as my Christmas gift to myself, a reward for all the horseshit movies I've put myself through for fame, glory and comedy. And why shouldn't I? Here we have two of my favorite filmmakers, Joel and Ethan Coen, finally making an honest-to-God western that stars none other than The Dude himself. I feel like this is the one instance this year where I'm allowed to have ridiculously, unreasonably high expectations. If this movie doesn't deliver, I might as well cross off 2010 as the year everything turned to shit.

REALITY: Based on what I've just written, you've probably guessed that I'm a Coen bros. fanboy who's programmed to love everything these guys sneeze on. Hell, I even liked Intolerable Cruelty. With that in mind, I'd like to move forward by saying that their version of True Grit is a very good film. It's one of the better westerns to come out in years (which isn't that hard; who the fuck makes westerns anymore?), and one that's bound to wind up on a bunch of "best of 2010" lists just on name recognition alone. But then, in just a few of the ways that really matter, it's not perfect.

The film opens with the murder of Mattie Ross's father. After 14-year-old Mattie (Hailee Steinfeld) collects her father's body and settles his affairs, she sets about finding someone to help her hunt down Tom Chaney (Josh Brolin), the man responsible. Mattie hires a US Marshall named Rooster Cogburn (Jeff Bridges), a man she describes as having "true grit," which apparently means drinking a lot of whiskey, killing a lot of people and slurring your words. Rooster reluctantly agrees to find Chaney, but not before being joined by Texas Ranger Shia LaBoeuf (Shia LaBeouf Matt Damon). With the team in place, the search for Tom Chaney begins, and we soon discover which of these people genuinely has true grit. 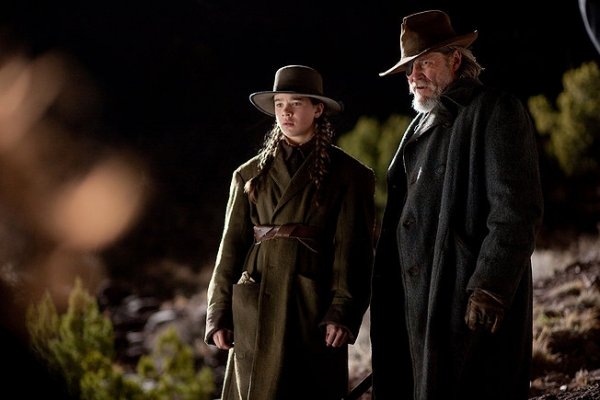 Don't go runnin' ahead now, y'hear? You know yer grampa don't see too good out of one eye.

You might think that with a story this simple, the Coens would take the opportunity to fly off the handle and do something weird with their first real western. You'd be wrong. They play the film pretty straight, reining in their oddball tendencies, allowing Charles Portis' novel room to breathe on-screen. In adapting the novel rather than simply remaking the 1969 John Wayne film, the Coens allow the story to unravel out from under the shadow of The Duke. And really, who remembers anything about the original other than the fact that John Wayne was in it? Whether or not the Oscar he won for it was really for just being John Wayne, that's pretty much the legacy of True Grit. With that in mind, this version seems dead set on escaping, or at the very least not repeating, that legacy.

It's fitting, then, that this film relegates Rooster Cogburn to the role of a sidekick. He gets his moments to shine heroic and kick people's teeth in, but True Grit is ultimately Mattie Ross' story. In playing Mattie, newcomer Hailee Steinfeld is forced to carry the entire film, periodically helped along the way by the banter between Jeff Bridges and Matt Damon. As much fun as it is watching Jeff Bridges fart on Matt Damon and stagger around like a true drunk, Steinfeld comes out of this film looking like a seasoned pro. The Coens have saddled her with some extremely clunky "Western" dialogue, and she makes it sound absolutely natural.

Where the film ultimately stumbles is more in the telling than in what's being told. The opening, in which Mattie prepares to hunt down Tom Chaney, drags along almost to the point of losing the audience. It sets up the characters just fine, but the adventure doesn't seem to want to get underway until every single character has had a chance to tell Mattie to go home. Every "Hero's Journey"-type story has that moment where the main character is offered one last chance to turn back, go home and not have an adventure. True Grit has about six. Once the film crosses that hurdle, things start moving at a decent clip for about an hour and a half. Then the film simply ends.

I can't say that the climax left me wanting, because it wrapped up everything it set out to do. What it did, though, was treat the events like they ultimately didn't matter. People are killed and as soon as they exit the frame, the film acts like they never existed. The real danger of the climax doesn't offer much in the way of dramatic tension. Not to say that some of the final scenes aren't tense, but they just feel unimportant.

With filmmakers like Joel and Ethan Coen, this can't possibly be something they did by mistake. It feels like a choice, and even though I can probably gather what they're trying to do, it doesn't really make for thrilling cinema. The ultimate message of the film is that seeking revenge doesn't offer much in the way of closure. This is something we've been taught by every single Batman movie ever made. To that end, I'd like to suggest that what the Coens are doing with this film isn't simply answering our demand for a real western, but rather trying to show us that we don't need billionaire playboys in bat suits to teach us right from wrong. A western about a 14-year-old girl will do just fine.

MINORITY REPORT: In these wintry conditions, it would have been wonderful if the local council had applied some "true grit" to a few more of the roads around here. See what I did there? I made a joke about grit. - Ian "ProfessorClumsy" Maddison