EXPECTATIONS: Meet the Parents was a big surprise to everyone when it proved to be one of the best comedies of its time. It became the definitive vehicle for Ben Stiller and pushed Robert De Niro firmly back into the mainstream. The star-studded sequel Meet the Fockers managed to pass me by in the way that highly popular American comedies often do. Now that we're into installment number three, the question we need to ask is "Is there any life left in this franchise, or are they just scraping the barrel for the sake of cashing in?"

REALITY: I have to admit, that is easily the most obvious question I have ever asked. You don't even need to have seen the film to immediately cry out "the latter." I had initially considered making the body of my review a series of guttural groans and demonic utterances, interspersed with photographs of myself in increasing states of self-mutilation, culminating in my eventual death. I then decided that was a little too abstract and possibly even inappropriate. But know this: Little Fockers represents the longest, most arduous eighty minutes of my life. It is an experiment in time-compression, in that it makes every minute feel like an hour.

We are gradually re-introduced to Gaylord "Gregg" Focker (Ben Stiller) and his bizarre father-in-law Jack Byrnes (Robert De Niro) as they do a bunch of stuff and get on each other's wick for absolutely no justifiable reason. There is no plot, just a series of incredibly mundane scenes; some involving Jessica Alba improbably trying to seduce Ben Stiller while being as irritating as humanly possible; some involving attempts to impress the titular little Fockers upon Laura Dern and her school for gifted and pretentious infants; yet more involve Harvey Keitel and his inexplicable desire to dig a huge ditch. All these things go nowhere and for some reason culminate in a contrived fist-fight in a ball pool between Stiller and De Niro. I've never seen a film go from soap-opera banality to outrageous silliness so suddenly and still not be funny or interesting in any way. 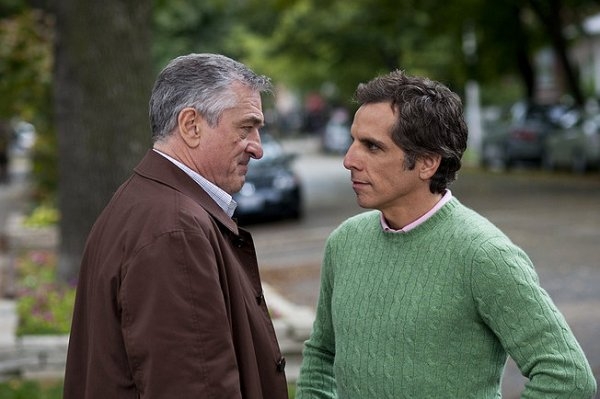 This is what most of the film looks like.

So the first film, Meet the Parents, is about Stiller's character attempting to impress his prospective father-in-law so he can marry his daughter. The second is apparently a continuation of the same idea, bringing the two families together. So this third film, Little Fockers, is surely about the children, given the title? Well, no. The children themselves are so barely present in the film's narrative and themes that they may as well have been stillborn. At what point did the writers decide to explore literally nothing with this film and simply portray a continuation of these characters' lives? Probably around the same time someone said "Hey, can we get Jessica Alba to run around in her underwear?" and everybody realised they could make some profit from this sterile franchise after all. Personally, I think Alba's talents are wasted here. She should stick exclusively to roles in films that I don't have to watch. 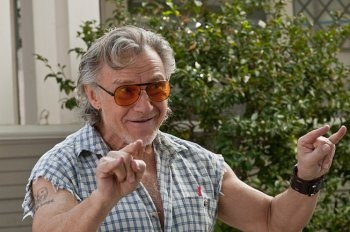 Remember Harvey Keitel?It's worth noting that I saw this with a rather full house and there were only two occasions when the crowd was notably amused. Both of these moments involved the spurting of fluids. How outrageously hilarious that a child should vomit copiously into his own father's face just because he made him eat a bite of lasagna! How rib-ticklingly, side-splittlingly, pants-wettingly hysterical that that same father should cut his finger whilst carving a turkey and bleed more than he should all over the faces of his beloved family! In the laughter of the crowd, I sensed an emptiness, a longing for something more. If the script had even an ounce of genuine humour, there would be no need to resort to these things.

All of which brings me to the case of the aforementioned punch-up in a ball pool between the two leads. Imagine if the characters in these films had conversations with each other instead of sneaking around and unduly wandering into supposedly hilarious misunderstandings. But I guess that doesn't make for much of a climax to a film that can only get laughs by throwing excretions into its actors' faces. Considering that the climax to Meet the Parents involved De Niro and Stiller actually having a heart-to-heart in their stilted way, this is a huge step backward. The only thing that could be more self-damning would be if they had an entire subplot about Robert De Niro's erectile dysfunction being self-medicated, leading to a scene in which Stiller has to inject adrenaline directly into his penis. Oh wait, that does happen. Good thing De Niro didn't spot any subtext there or he may have taken offense.

MINORITY REPORT: All of cinematic history has been leading to Little Fockers, when you think about it. Taxi Driver, Wild at Heart, Bad Lieutenant, Greenberg, Rain Man, Owen Wilson's suicidal meltdown, Funny Girl/Funny Lady ... all training for Little Fockers, which concludes with a sly Radiohead-by-way-of-the-Caribbean plot device, a knowing nod at its influences: A punchup at a pool. Hell, Little Fockers even works as an intelligent argument against homeopathic medicine: Instead of treating his problem just by staring at Jessica Alba in her underwear, De Niro goes the 21st-century route and takes pharmaceuticals. It's a sublime work from a stable of filmmakers at the top of their game, a masterpiece and -- prediction time! -- a shoo-in for Best Picture when the Academy comes a-votin'. - JonBenet Ramsey, watching from God's own screening room