The Identical; The One I Love

The One I Love

EXPECTATIONS: I know next to nothing about this movie aside from what I've been told about its premise. It looks kinda like a schmaltzy romance with comedic elements, which as we all know, I just love. Whatever. Bring me your saccharine garbage, movie.

REALITY: Sometimes my expectations for a movie are spot-on. I see one trailer, and I know immediately what that movie's going to be. Or, less certainly, I hear a few things, see some marketing, and think, yeah, I've got a pretty good idea what that's all about. And sometimes, I am so very, very wrong.

This is one of those times.

Ethan (Mark Duplass) and Sophie (Elisabeth Moss) are husband and wife, dealing with marital strife. In no time flat, we find out that he's cheated on her, and they both hoard and cling to their grudges like a paranoid dragon with a pile of treasure. They try to recreate the magical moment from the night they first met, and it rings hollow, because, surprise, you can't force spontaneity. Their therapist (Ted Danson, oddly enough) recommends they head out to a romantic getaway he claims has worked for many other couples, a remote little cottage with a guest house. 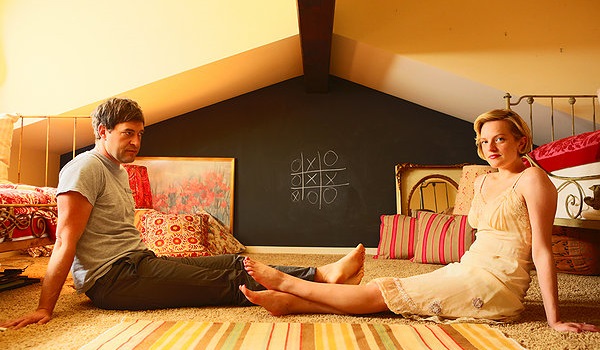 How many metaphors for tension can YOU find in this picture?

Still with me? Okay, hold onto your butts, it's about to get weird.

Once they arrive at this scenic little cottage, Sophie wanders into the guest house, where she has an exciting and sexually heated evening with Ethan... except it's not him. It's a copy of some sort. Ethan is peacefully snoozing in the main house while his wife is getting down and dirty with a charming man who looks and sounds exactly. Like. Him. The next day, when Ethan enters the guest house, he meets a copy of Sophie, who, based on her behavior, can't possibly be the real Sophie. Rightfully freaking the hell out, he goes to his wife, they work out that something freaky is up with the guest house, and leave. But, since this a movie and people are fools, they go back to investigate this apparently magical occurrence and maybe try to work out their marriage in the process.

You see, The One I Love is actually an extremely well-executed modern fairy tale. I don't mean this in the sense that we now think of this term, with SUNSHINE and DAISIES and MAGIC FAIRIES to help everything come up roses; I mean this in the sense of old folklore about fairies, as cunning, deceptive creatures that would lure mortals into their fairy circles and entrap them with tempting illusions. Once ensnared, mortals would be unable to leave and ultimately die by the revelry in the strange, magical plane. The only way to escape a fairy circle is to trick the fairies, and not fall prey to their illusions. The guest house and the copies within seem to operate on similar rules.

As such, the movie is absolutely terrifying. Stop kissing him, that man is wearing your husband's face but it's not him, I thought to myself more than once, fully aware that Sophie was fully aware. Copy Ethan plays the role of the perfect, ideal husband, the one Sophie has been longing for. Copy Sophie makes Ethan his perfect breakfast, patient as can be, politely attempting to draw him in. As time passes, things grow steadily more menacing underneath the apparently placid surface, bringing the film to a creeptastic and satisfying climax. 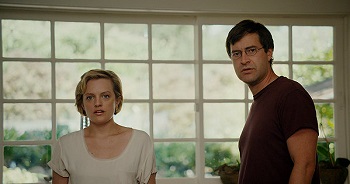 For God's sake, you two, stop looking at the camera!The beauty of this romance-turned-horror is that it uses this series of increasingly eerie and sinister events to make a point or two about human romance, much more effectively than a schmaltzy romance film would have. How much dissatisfaction in relationships comes from people refusing to use their words like adults, and how much is from longing for something their partner is not? Is it natural to desire that your real partner, with their flaws and independent desires and agency, more closely match a fantasy version, whose only concerns are your concerns? When we say we love someone, are we truly in love with them, or with the (creepily) idealized version we have in our heads? How much of a functional romance is passion, and how much is dedication? The One I Love skillfully uses the framework of a fairy folktale to explore all of these questions, with a smattering of thoughts about THE FOLLY OF MAN for good measure.

Particularly impressive in conveying all of the nuances of these themes is the acting of Duplass and Moss, who both do an awesome job playing two different characters. Duplass draws on a Stepford aesthetic in his performance, pushing Copy Ethan's seemingly harmless behavior into something truly ominous. Moss can make Copy Sophie shift from friendly and sweet to batshit terrifying in an instant, merely by shifting the corners of her mouth. After a while you forget that it's the same actor playing both roles, so distinct is each performance.

While the cinematography isn't anything to write home about, the use of the score is awesome, calling back to the discordant piano in the therapist's office at the beginning of the film and borrowing little flourishes from the score of Invasion of the Body Snatchers (appropriate, as it's another film where strangers wear familiar faces). The music is the first clue that the movie is actually a horror film; the dissonance, the unevenly placed staccato notes, and the pronounced use of silence contribute heavily to the anxious atmosphere that begins to permeate the film in the first act.

Really, this film is probably one of the most uncomfortable films I've ever watched. It's not particularly gross or violent, it's not viscerally disgusting or populated with pop scares, it's just deeply unsettling. Well-written and very well-paced, it's never boring and provides you with just enough exposition for things to make sense without distracting from the point. The odd bit of humor punctuates exchanges in the film, preventing any sense of being smothered by the omnipresent creepiness. This movie strikes a balance between romance and horror by abandoning the sugar-coated antics of the ever-popular rom-com in favor of something with more substance, and goddamn if that's not refreshing.

MINORITY REPORT: Wait, so are you telling me that this film contains no gauzy montages of David Bowie songs played on a ukulele? Forget it, I'm outta here. - Libby "Gentleman Loser" Cudmore