EXPECTATIONS: I fucking hate rom coms. They are some of the most ridiculously condescending and pandering films out there. They're not all terrible, but I specifically hate every single romantic comedy that uses the line "can men and women really just be friends?" Yes. The answer is obviously yes. It happens all the time, every day, all over the world. Even if you're straight (which, by the way, not everybody is), you don't necessarily want to bang every single member of the opposite sex that you meet and get along with, so every time some fucking rom com tells me "sexual tension makes opposite sex friendships impossible :)" I want to vomit blood on everyone responsible for bringing that film into being.

That said, I'm not some kind of emotionless robot who doesn't like a good film where romance is the centerpiece, and I've enjoyed Dan Radcliffe's post-Harry Potter career, particularly his performance in The Woman in Black. What If (released elsewhere as The 'F' Word) has apparently won a few awards, so maybe it'll be a good time, we'll see.

REALITY: Romance films, regardless of comedic content, often have the special challenge of attempting to create a world that is both sufficiently realistic (so that we can believe this might plausibly happen), and fantastical enough that we are caught up in the magic of their cinematic love. Unsurprisingly, this genre has become littered with shitty tropes intended to strike this balance. What If wants to ignore all that and present you with a more realistic version of love, and fails. Hard. 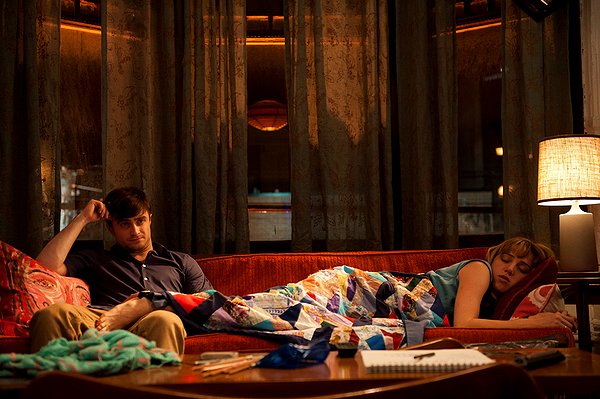 This is what real relationships look like. So romantic.


Wallace (Dan Radcliffe) is thoroughly disenchanted with love after a shitty relationship with a shitty girl who cheated on him in a gross way with a gross dude. At a party, he meets Chantry (Zoe Kazan), which is exactly the kind of quirky name you'd expect a quirky girl who works in animation for a living to have in a fictional universe where all the dialogue is weirdly blunt. They seemingly hit it off only for him to find that she has a boyfriend. By this point he's already developed a romantic interest in her, and thus the conflict ensues. And ensues. And ensues. Seriously, this movie is nearly two hours long for no reason I can fathom.

The thing that's most frustrating about this film (evidently based on a play titled Toothpaste and Cigars), is that it wants to be different from those other romantic comedies featuring boring shoegazing music. To an extent, this kind of works. Most importantly, Chantry is humanized. She's got her own feelings, goals, and conflicts to deal with, much like a person might. The film is as much from her perspective as Wallace's, as she struggles through developing feelings for someone outside of her relationship. This movie does not want to be shallow fluff. Also, to its credit, the film shows that going out of your way to pine after a girl who's unavailable, even making The Big Romantic Gesture" to show her how you feel, is in fact an incredibly painful, stupid, and selfish thing to do. These are good and different ideas to have pop up in your romance movie, but beyond that, things fall apart. 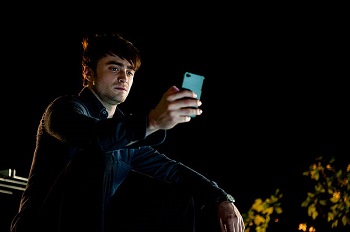 But most of the time they look like this.While the movie emphasizes that there is no way to pursue someone in a relationship that doesn't make you "sleazy, conniving, or pathetic," it completely negates this message by (SPOILER WARNING FOR THIS FILM I BET YOU'RE TOTALLY JONESING TO SEE) having these two end up together by the end. "This is dumb, don't do it," the movie tells us, while rewarding the characters for doing exactly that. They reach bliss by routinely making the dumbest choices imaginable. Chantry decides to dump all over her steady boyfriend of years and years by crossing lines and refusing to establish and follow boundaries. (Quick tip: If you're in a healthy committed relationship and find yourself developing a serious crush, either break up with your partner, or stop nurturing those feelings. Don't be a selfish dickbag!) Wallace decides, more than once, that she's really the girl he wants to be with, so while he appreciates her friendship and doesn't want to lose it by confessing his feelings, he's also deliberately nurturing feelings for her, going so far as to avoid dating other women. This leads to sore feelings all around, until one awkward conversation and a time skip later they're getting married.

The film attempts to justify this unmitigated stupidity by stating, in one form or another, "Love is messy," repeatedly. Irritatingly. Sure, love is messy, but the way to address that is to use your powers as a brain-having adult and consider the feelings of others before you act, not to follow your every petulant fucking whim. These two make shitty, selfish decisions, and hurt themselves and each other and other people, but rather than have these characters learn from this, the movie instead shows them happily ever after. Meanwhile, Chantry's boyfriend Ben, who is a pretty good dude, gets tossed to the side and we don't find out what happens to him. Presumably he's just as disenchanted with his shitty girlfriend cheating on him as Wallace was at the beginning of the film.

This is a film where behaving like a myopic, self-centered jackass ultimately gets you your soul mate in marriage, which is, I can't stress this enough, the DUMBEST fucking way it could have ended. Chasing Amy got this shit right over a decade ago, for fuck's sake.

Despite having the most mind-numbingly senseless ending possible, it does a few things well. The exposition is brief and skillful. The dialogue, though laughably unrealistic, is fun, quippy banter. The supporting character couple is cute. This film isn't without its appeal, if it's your kind of movie. Is it your kind of movie? Listen to this: Early on, after Wallace initially makes the decision not to call her, he and Chantry coincidentally happen to run into each other again... because they both go to a showing of The Princess Bride, each of them at the theater by themselves. If that sounds in no way pandering or contrived to you, see this movie. If it does, dear fucking God, don't waste your time.

MINORITY REPORT: It's good to see another example of the cardinal rule, that movies with questions for titles are bound to suck. But, really, it could have been worse. - Sean "Keanu Grieves" Hanson