EXPECTATIONS: Here's what I know about Parker, the fictional criminal: He's in a series of novels written by Donald Westlake under the name Richard Parker, which were later adapted into graphic novels by my favorite comic book writer and artist, Darwyn Cooke. Here's what I know about Parker, the movie: It made me go through IMDb wondering if Jennifer Lopez has ever actually made a good movie. (Answer: The Cell.) While I was doing that research, however, I did stumble across something interesting. Here's the Wikipedia description of Parker, the novel character:

"Parker has almost no traditional redeeming qualities, aside from efficiency and professionalism. Parker is cold, methodical, and perfectly willing to commit murder to get what he wants."

Well, that's certainly interesting. I like the idea of Jason Statham playing a character that's completely amoral, like a Bad Lieutenant type... Oh, wait, what's that, IMDb summary of Parker, the movie?

"A thief with a unique code of professional ethics is double-crossed by his crew and left for dead."

Well... "willing to kill a bunch of people in cold blood" is a unique code, I guess. I mean, it's not like they would take the one interesting trait of this character and then completely scrap it because the audience can't handle a protagonist who isn't clearly a "good guy," right? ...Right? 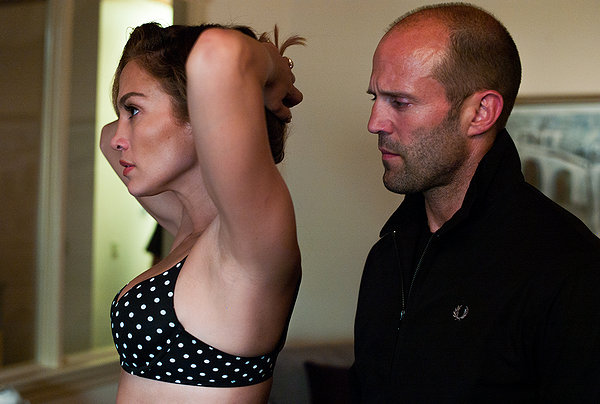 REALITY: Wrong. Almost every moment of this film that doesn't depict Parker punching or shooting people is spent establishing that he's the moral pillar of high-level thieves. In case you weren't sure about it, the first time we meet Parker, he is disguised as a priest. "I don't steal from people who can't afford it, and I don't hurt people that don't deserve it," Parker reminds us, as he proceeds to choke a hospital nurse unconscious and steal a bunch of cars from middle-class midwestern families whose insurance probably doesn't cover theft.

Maybe this is the point, that Parker thinks he's above the criminals he's fighting against, but is actually just as bad. However, for that to be true would require this film to have a massive sense of self-awareness, and any film that puts Jason Statham in the lead and then only has one real fight scene probably doesn't have that.

We open on career criminal Parker, pulling off a heist at the Ohio State Fair, because we wouldn't want to have an opening sequence in any place that might actually have some credible threats. That would cause tension and intrigue, and this movie goes out of its way to avoid such things.

After refusing to partake in an even bigger heist, Parker is attacked and left for dead by his cohorts, who are led by the unthreatingly-named Melander (Michael Chiklis). Parker survives, and after transporting his girlfriend Claire (Emma Booth) and his former partner/Claire's father (Nick Nolte, not really making the best of his career resurgence) to safety, Parker tracks the crew to Palm Beach, Florida. There he meets Leslie Rodgers (Jennifer Lopez), a divorced real estate agent who lives with her mother while fighting off the advances of debt collectors and a romantically minded police officer, who I'm only mentioning because it's Bobby Cannavale, and I love that guy.

Parker fumbles through a fake Texas accent to get Leslie to show him houses where Melander and crew might be hiding, until she figures out his real plan and then joins him because she contributes... something, honestly, I'm not sure what. That she "knows the territory?" Can Parker not use Google Maps? It's really a flimsy excuse for her character to be there, or to exist at all. Normally, I'd let this go, but it really bothers me now, and I'll explain why. 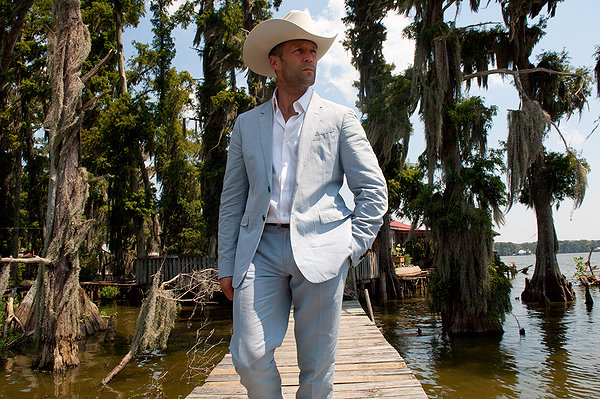 You sure about that hat, Jason?

There's a vein of sexism running through Parker, and not the normal level of action-movie sexism that we've all kind of learned to accept. It's one thing to have your female lead be kidnapped and become the damsel-in-distress. It's another issue entirely to have your female lead actively make a decision that makes no sense within the context of the story and her character, which can serve no other possible outcome than to get her kidnapped and become the damsel-in-distress. Lopez's character serves literally no other purpose, except maybe to take her clothes off and exacerbate the misogyny. Every moment she's on screen, from the introduction, to her long-winded backstory, to her deciding to go to the bad guys' hideout for literally no definable reason, serves no other purpose but to get her in the arms of an antagonist with a gun to her head.

What makes this worse is that they've already got a perfectly fine person to get kidnapped with Claire, a character we know Parker actually cares about. (Claire, by the way, is apparently completely incapable of defending herself, despite literally having spent her entire life around criminals.) Is the purpose of this just to have another female character? Why? It's not like anyone really expected this film to be progressive about gender roles. Frankly, I'd rather have a movie with no female characters than one which spends the entire movie pretending it has a decent female lead while developing them to be bait.

What makes this all the more frustrating is the amount of buildup we spend getting to pointing the gun at Jennifer Lopez's head. I don't think director Taylor Hackford has ever had a sense of pacing, and here it just gets ridiculous. I mentioned earlier that there's only one real fight scene -albeit poorly shot and unmemorable - unless you count scattered scenes of Parker shooting some dudes. The rest is spent having Statham and Nolte saying "Boy this sure is a dangerous situation!" "You're right, by golly, it's dangerous!" while agonizingly dragging out the development between Parker and Leslie. I've already mentioned that this is building to nothing, but any audience can recognize it. There's no tension or chemistry between Statham and Lopez, and this reflects in the film's halfhearted attempt to form a love triangle, which is defeated by the fact that Parker clearly doesn't care about her one way or the other. It's all just a giant mess of nothingness, with absolutely no reward for tolerating it all.

Parker commits the worst sin an action movie can: It's just boring. Leslie is more annoying than interesting, and Parker just isn't a likable character, despite the film shoving it down our throats that we should root for him. There's never any sense of danger or a feeling of anything being at stake, and the entire heist scenario isn't interesting in the slightest. Parker wants to be Jack Reacher when it grows up, but clearly it has no idea how. Well, it's simple, producers of Parker: You just take what you're doing, and then you stop doing that, and instead, you make a good movie. See how easy that was?