John Dies at the End

EXPECTATIONS: The buzz on John Dies at the End, directed and adapted by Don Coscarelli from a nerd-favorite novel by David Wong, is that it's good to really good, but not quite as good as the novel. I haven't read the novel --

DUDE YOU HAVEN'T READ JOHN DIES AT THE END???

BUT DUUUDE THE MOVIE'S NOWHERE NEAR AS GOOD AS THE NOVEL.

Yeah, that's what I keep hearing. But I already gave my $10 to Apple, and I clearly don't have time to read a novel and watch the movie in my 24-hour rental period, so I guess I'll just have to do what I'm supposed to do and, y'know, judge an adaptation apart from its source material instead of pitting it against some hypothetical realization of said novel that exists only in my mind. 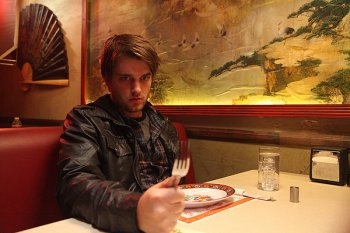 This guy is bad news for pancakes.REALITY: Early in John Dies at the End, when John (Rob Mayes) is still alive, a stop-motion animation monster builds himself out of -- well, I'm not going to spoil that. The point is, that scene sets the tone for what follows: a manic, exuberant celebration of narrative fuckery and a horror film that's good at violating the limitations of the genre while going light on the scares. So, yeah, John Dies at the End is pretty much exactly what I expected from the director of Bubba Ho-Tep and a senior editor at Cracked.com.

John Dies at the End skips through time at the whims of an omniscient storyteller who prefers circles to lines. We begin outside of this circular narrative, at which point our protagonist, named David Wong much like our author, poses a seemingly unconnected existential riddle regarding zombie dismemberment and hardware repairs. Then we skip to the present, as David (Chase Williamson) explains to reporter Arnie Blondestone (Paul Giamatti) the origins of a designer drug that induces omniscience, wild delusions and eventual malevolence. And then we hit up the future to watch Dave and his buddy John combat the encroaching evil. John Dies at the End has a beginning, middle and end, but where those are placed within the narrative is up for debate.

Hell, whether John Dies at the End has a coherent plot is up for debate. We can infer what transpired in those missing pieces, and we can probably guess how everything's related, but it never quite comes together. Fans of the novel, rabid and prejudiced though they may be against any adaptation of John Dies at the End, may have a point: This film is missing whole chunks of plot, whether they were never scripted, never filmed or intentionally excluded.

However, the naysayers are wrong in assuming this is a flaw. With those missing pieces, John Dies at the End plays exactly like a drug trip, which is appropriate for a film about a protagonist who's a) named after the novel's author and b) constantly high out of his mind. Much like the character, the audience is tasked with filling in the blanks in a broken cause-and-effect chain to determine how one event leads to another. John Dies at the End is that rare movie that respects our intelligence and expects us to participate. I wish more films would take its lead because the end result is that much more rewarding. By actively decoding the narrative, by following our protagonist's whacked-out logic, we can appreciate just how much fun Coscarelli had while paring this narrative to thinly connected sketches that are simultaneously funny, audacious and whimsical. 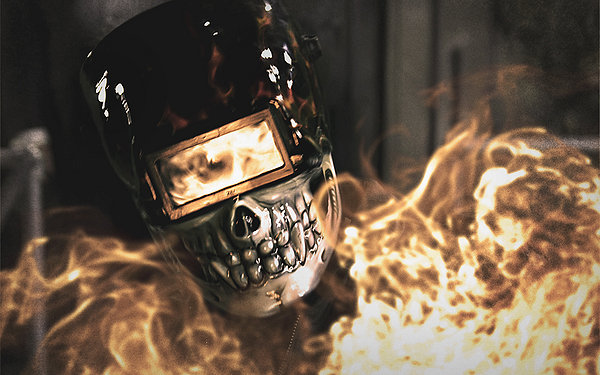 The first genuinely interesting image in this week's Current Releases.

John Dies at the End's only major flaw -- and it's a damning one -- is Coscarelli's failure to generate empathy for any of the characters, most of whom feel more like ingredients for a recipe than fully fleshed-out beings, even as some of them experience some pretty horrible shit. While many of the performances are amusing, particularly Clancy Brown's turn as a television psychic, we're left without an entry point as the narrative spirals into chaos. This wouldn't be so bothersome if John Dies at the End didn't come on the tail end of a string of films that use humor to deconstruct the genre at the expense of empathetic characters. The Cabin in the Woods, Detention, Excision and American Mary occupy roughly the same contextual space as John Dies at the End, and there's a lesson to be learned: the more esoteric your film is, the less relatable your characters will be.

And this film beats its head against that limitation, as neither the romantic nor bromantic subplots connect the way they should. As difficult as it is to care about Dave, I couldn't give two shits about his friendship with John or his budding affection for the one-handed Amy (Fabianne Therese), who's apparently one-handed only so Dave can white-knight for her at a party. It makes sense that John Dies at the End began as an online exercise in fiction-writing, because the film, in its shallow treatment of men, its shallower treatment of women and its tendency to subjugate characters to a crackling good story, reflects all of the worst tendencies of the Internet male. After all, there's a character named "Mmm Bacon."

MINORITY REPORT: In a week where all the major releases are structurally unsound, exceedingly juvenile and flat-out ridiculous, leave it to Don Coscarelli to snag Movie of the Week by doing all of those things on purpose. I would tell Hollywood to take notes, but everyone who can read is still away at Sundance. - Joseph "Jay Dub" Wade