More Reviews from the Wasteland Chronicle

Son of the Mask

EXPECTATIONS: Nobody truly ever expects to find a decades-old treasure chest washed up along the bank of a river, and even though that's exactly what happened to me, I still didn't expect to find another precious film inside. Clearly, someone in the past felt that Son of the Mask deserved to be kept safe in the event of a global apocalypse. For better or worse, it's in my hands now, and I can't wait to see what you past folk thought was so special about this silly-looking little movie.

REALITY: The first thing that became apparent about this movie was that it was definitely not stored in a treasure chest or a time capsule for safe keeping. No, it was locked away and hurled into the river for fear that some poor soul might one day find it. That poor soul turned out to be me. It's no wonder your society went belly up. If I had to own up to being the brains behind this particular atrocity, I'd probably press the little red button too. Several times, even. Son of the Mask is that special brand of terrible that you only read about in books or hear stories of in traveler's lodges, except this time it is very, very real.

The movie stars America's favorite son Jamie Kennedy as a thinly-veiled reference to cartooning legend Tex Avery. His character, Tim Avery, is a semi-retarded manbaby who still somehow has a beautiful wife and a job at an animation studio. One fine day, Tim's dog takes a stroll through their backyard and just happens to find the magical mask of Loki, Norse God of Stupid Shit, the very same mask last seen being flung off a bridge by Cameron Diaz. When given no other choice but to wear the mask to a costume party, Tim turns into a redheaded plastic frog who promptly breaks out into song and dance and then impregnates his wife.

Also lurking around the plot is Loki (Alan Cumming, who apparently is just like that all the time), who is stuck on Earth searching for his long-lost mask in order to go back home. The fact that Loki is even in this movie at all presents its own set of problems. There are three main conflicts in the film: Tim wants a promotion; Tim doesn't want a baby; Loki wants his mask back. Do you see a connection there? No? Good, then it's not just me. No amount of narrative wheel-spinning can make this sorry excuse for a story connect, and adding a weak supervillain just so the characters will have something to do does absolutely nothing to help an already empty plot.

In fact, Son of the Mask follows the three textbook rules on how to make a terrible sequel. 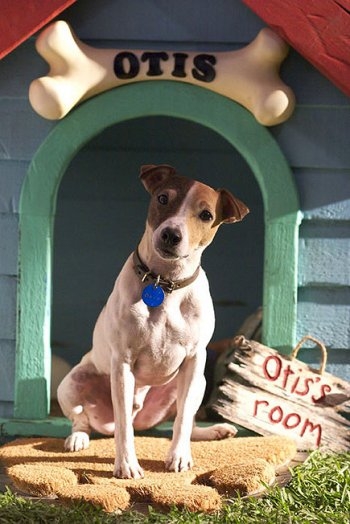 At least it doesn't talk.1) Take everything magical and mysterious about the original film and explain it all away. Chances are nobody even saw the original, so the filmmakers can take this opportunity to not only repeat everything we learned the last time around, but then repeat it again just to make sure we got it. And then after telling us twice, they show us. The very first scene not only explains to death what Loki's mask can do to the person wearing it, but also that Loki is indeed a very real, very stupid-looking person who can do all the wacky shit his mask can do without needing to put it on. In other words, Loki created his mask eons ago just to be a dick about it.

2) Base your entire movie around a Ben Stein cameo. Remember Ben Stein's character from the first film? Me neither, but apparently he was in it, which gave the filmmakers the bright idea of bringing him back so he could explain the mask to us again. Very slowly and very boringly. You readers won't get to see it for another few years, but Stein also makes an appearance in Ferris Bueller's Teacher Workday Off, where he plays a principal who refuses to let Civics teacher Bueller have the day off work. It's a really lame cameo then, and it's even lamer here.

3) Cast Jamie Kennedy. The reasoning here is simple: Kennedy has all the comic timing and natural charisma of a boss-eyed zombie. Slackjawed stares and "Bu-bu-bu-whaaa?" only go so far, but for some reason executives eat it up. It might not be readily apparent to you now, but Jamie Kennedy will eventually go on to become one of Hollywood's workhorse actors. Whenever an A-lister drops out of a sequel, Kennedy is there to collect the paycheck. Son of the Mask is just the beginning. Not only does he go on to fill in for Martin Lawrence in Bad Boys 3, but he'll also take top billing in Dessert for Schmucks, Yes Man 2: Affirmative Actions, and Saddleblast VII.

The real tragedy of Son of the Mask, though, isn't its terrible lead character or even the failed attempts at generating conflict. No, the film's major downfall is that it desperately wants to be a cartoon. Loki has the power of CGI, Tim's baby is possessed by Tex Avery's pissed-off ghost, and the entire look of the film appears to have been cut-and-pasted together from copies of MAD Magazine. I could take one look outside the Laird Compound if I wanted to see rivers of baby pee or dogs with Wile E. Coyote complexes (seriously, those things are fucking everywhere). If someone had just had enough foresight to draw all of this with a pencil instead of having people waste their time acting it out, the result would still look completely retarded, but at least it would look like it was meant to be that way.

Son of the Mask deserves to be locked away in a box where nobody will ever find it. No, wait, that didn't really work, did it? After I end this transmission, I'm sending this thing over the nearest waterfall in a barrel full of TNT.

*The movie does deserve one brownie point for at least correctly guessing that Loki is, indeed, the son of Odin.

MINORITY REPORT: The future is a bleak and forbidding place indeed if what you say of Jamie Kennedy's upcoming projects is true. Although I am still looking forward to the Saddleblast saga. - Ian "ProfessorClumsy" Maddison