In Relief, in Requiem: American Pie 1-3 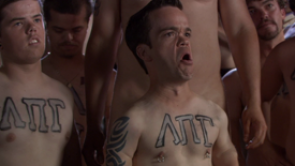 Pierced midgets: Everything you've come to expect from the American Pie franchise, and more!

Regardless of budget, there's no excuse for lazy writing -- even in a direct-to-DVD sex comedy. The writers know this; they're clearly attentive to the continuity of the Stifler clan, because each film prominently features at least one of its members and lovingly fills in back story for absentee Stiflers. They actually work hard to craft dialogue that sometimes works. But when Jim's Dad dances so mercurially through the various plots, his connection to each devolving from tenuous to absurd, it's a glaring deficiency, one the writers responsible for American Pie 1-3, who actually cared about the depth and continuity of their characters, wouldn't abide.

Point of fact: American Pie Presents... makes its predecessors look like The Godfather in thematic complexity, tonal consistency and depth of character. All these years, I thought American Pie was a fairly effective sex comedy, but these four sequels paint it as a Dostoevskian masterpiece, a superb morality fable and one of the funniest films of the '90s.

Returning to The Book of Love

There is good news, a light at the end of the tunnel: The Book of Love isn't quite as terrible as its immediate predecessors.

Sometime in 2008, Universal executives decided that what American Pie needed was a full-on reboot, with the catalyst for the first film's conflict, the ghetto Kama Sutra, as a linking symbol. After nearly burning down the school library, a new Jim -- well, his name's not Jim, but he's damn near the same character, and what's in a name? -- finds the book that gave us such memorable sexual maneuvers as The Tongue Tornado and The Running Wheelbarrow (or was that Cosmopolitan?). With the aid of his fat, slobbish friends (half as attractive as the original males, and a tenth as funny), he proceeds to get his first fuck on simultaneously with his buddies in a montage set to somber, soft music, a scene that more than incidentally recalls the first film.

Instead of an apple pie, New Jim fucks a PB&J. There's a Stifler -- fat and retarded, sure, but he's trying his best to distinguishing himself from the series' gradually worsening string of Seann William Scott impersonators. There's even a vague indication that the same moral that propelled the first film is at play. Unfortunately, it's not funny. More unfortunately, fewer people asked for a fucking reboot of American Pie than will have actually seen it by year's end. My local video store -- huge, and stocked with about 24 copies of Obsessed and all 20 seasons of Newhart -- stocks one, count 'em, one...lonely...unrented...DVD. And a Blu-Ray copy, so you can view its trembling mediocrity in full 1080p -- high-definition fake titties contained in a Blu-Ray that, by virtue of the English alphabet's failings, lies right around the corner from the porn section. I'll give you two guesses which draws more customers.

Surprise: The Initial Query was Rhetorical! 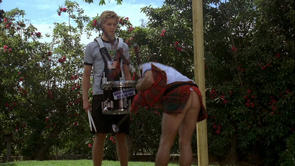 This may not be from The Book of Love, but it is an image wholly representative of the series at all. Universal, represented here by the kilted Scotsman, moons his audience while I, the captive e-critic, looks on in horror.

There is no conceivable target audience for The Book of Love. It exists merely to be mocked and criticized by the legions of online critics who will watch anything if it's printed on a free Blu-Ray.

Sure, someone will rent American Pie Presents The Book of Love, and become intrigued, and (willingly) endure 393 minutes so they can catch up on the Stifler saga. Do you know who these people are, Universal? Do you?