EXPECTATIONS: Valentine's Day is just around the corner, folks, and odds are, if you're reading this, that doesn't mean jack shit to you. But for everyone who didn't click this page by accident while looking for the Star Wars review, it means that the entire world is ordering you to do something romantic. Hey, you. Hey. Are you in love? You better be in love, bitch, because it's Valentine's Day. You ain't in love, Hallmark will mess you up. So, the world is telling you to do something bold and imaginative and romantic for the one you love, but that just seems like so much work. Instead, Hollywood's hoping you'll be lazy enough to let them do the work with this year's offering of romantic drama, which Nicolas Sparks surprisingly had nothing to do with. Sure, it's cheap and shallow, but if movies aren't gonna be creative, why should you?

REALITY: I'm going to betray my membership to the Brotherhood of Internet Movie Dudes here and just admit that I've learned to like Channing Tatum. Please bear in mind that's not the same as thinking he's a good actor, because he's not. However, he is a great casting tool, as we've seen before. Plus, there's just something charming about the guy. Yes, ladies and gay men, he is very, very good-looking, but he never seems like he's aware of or comfortable with how good-looking he is. Of all the leading men in film, there is none more awkward in his own skin than Channing Tatum. I imagine him as a freshman basketball player who's just hit his growth spurt and has no idea what to do with his body. That's why he works in The Vow, because everyone in this film is an overgrown 14-year old. 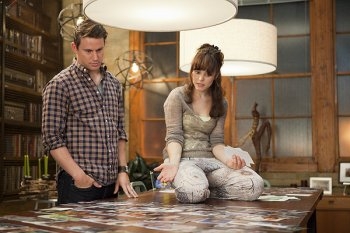 Your new table ornament might freak people out at dinner parties.In this film, Channing Tatum from Dear John and Rachel McAdams from The Notebook (This is seriously how the advertisements introduce them) play Leo and Paige, a young, successful married couple that's doing just fine until they have the brilliant idea to attempt to have sex in a car at a stop sign in the middle of a snowstorm in Chicago. The ensuing car crash strips Paige of all memories of their relationship, and apparently sends her back to age 17 even though she's supposed to be in her late 20s. Because his wife has been restored to factory conditions a la Buzz Lightyear, Leo must attempt to prove to her that she's actually in love with a total stranger. He's opposed in this quest by his wife's snooty parents and her ex-fiance Jeremy, who is cashing in on the fact that Paige's brain thinks he's her current fiance, and no one comments on how sleazy this is. This conflict would be a lot more interesting if someone pointed out to Jeremy that the girl he wants has to be literally brain-damaged in order to want to be with him.

The thing is, during the overly long scenes where we watch Leo and Paige fall in love the first time, everything is made weird by the fact that everyone acts like this movie is set in high school. This includes a Scooby-Doo-esque security guard chase that isn't adorable when everyone involved is pushing thirty. There's something unbearably naive about Leo's belief that his wife's brain will eventually stop being swollen if he just tries hard enough, which is why Channing Tatum works so well. The reason this movie is rated PG-13 is because 90% of this requires the audience to have a 14-year old's understanding of relationships. This movie is great for teenage dates, because it's pure adolescent fantasy. When teenagers think of themselves as adults, they picture themselves as they are now, only richer and better-looking, and that's the characters McAdams and Tatum play. They've even got teenage fantasy jobs, running a recording studio and being a professional artist. People in romance movies very rarely act like adults, but it's insanely grating to watch them act like children. 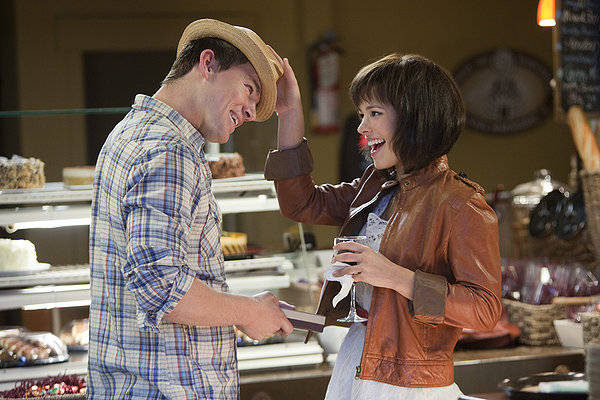 It's just a hat, it really isn't that funny.

There is a payoff to this, however, though it's subtle enough to be missed while the audience is making a play for second base. This isn't a miracle case of true love conquers all. This is a story of being in love as children and then being in love as adults. It's not until everyone grows up a little that the love story can really complete itself. It's a nice little message, sure, but it's wrapped in so much annoying pandering that it's not really worth it. Plus, there's Channing Tatum's incredibly bland voice-over. Seriously, that guy needs his pretty-boy face, because when it's just his voice, it's like my ears are scotch-guarded. The words hit them, but they don't sink in, they just bead up and fall to the sticky theater floor.

In all honesty, The Vow isn't bad. However, "not bad" is not the same as "good." Tatum and McAdams have fun chemistry together, and the film has its enjoyable moments. There were definitely scenes that made me smile, though an hour later I find myself completely unable to tell you what they were. This is a film as bland and white-bread as its leading man, and it relies too heavily on his non-existent dramatic chops to carry it. It's rife with poor editing, with scenes cutting out what feels like half a conversation, and the most melodramatic score this side of Bella and Edward's wedding. If you're forced by your significant other to watch it, you won't suffer much from it, but afterward you'll be filled with the regret that you could've spent these two hours doing something that wasn't entirely forgettable. (Appropriate enough for a film about memory loss.) Really, folks, if this is the best you can come up with come V-Day, maybe it's time to re-evaluate your relationship.

MINORITY REPORT: Wasn't this an episode of The Simpsons? - Ian "Professor Clumsy" Maddison