EXPECTATIONS: We don't often bother with re-releases here at Current Releases, but I feel that so much has been shouted angrily about George Lucas's constant revisionism of his best-known franchise that some effort needs to be made to view this film outside of that, and we need to be the ones to do it. I'm going to cast everything out of my mind, pretend I've never heard of Star Wars, pretend I don't know that this is a thirteen-year-anniversary re-release of a belated prequel to a thirty-seven-year-old original that itself has been re-released and revised countless times. I have to ignore all of that, empty my mind, slip on my 3-D glasses and give Star Wars: Episode I - The Phantom Menace a fair trial.

REALITY: In future editions of the dictionary, the definition of the word "regrettable" will be an account of my decision to give Star Wars: Episode I - The Phantom Menace a fresh chance. While it is very keenly focused on its central theme, The Phantom Menace is stilted, emotionless and surprisingly cold in spite of its intended audience. 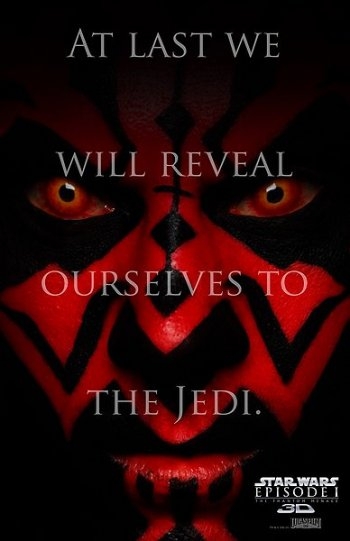 And we will reveal ourselves in both action figure and Halloween mask form, available at all good toy stores!After bungling a negotiation to lift a trade embargo, Jedi Knights Qui-Gon Jinn (Liam Neeson) and Obi Wan Kenobi (Ewan McGregor) flee to the nearby planet of Naboo, where they must rescue Queen Amidala (Natalie Portman). With the help of local frog-person Jar Jar Binks (Ahmed Best) and the tenacious Captain Panaka (Hugh Quarshie), the group escapes to Tatooine, a planet covered in nothing but desert. There, Qui-Gon meets Anakin Skywalker (Jake Lloyd). Sensing that there is an incredible power within the young slave that could save the universe from all wars or something (it's never really made clear), Qui-Gon decides to work toward freeing him and adopting him as an apprentice.

There are two plots going on at once here, well... I say "at once," but that's not really how it happens. You have the whole space politics thing building up to a war, and then all of that is put aside when everyone starts obsessing over a little kid because he might be the chosen one. Later on, they return to the space politics plot, but the audience has stopped caring. An incoherent plot doesn't always necessarily spell death for a film, but when one storyline of political backstabbing and lengthy trade negotiations is abandoned for an underdog story about a plucky young slave, and when that story builds to a climax and ends before the original storyline is picked back up, it plays merry hell with the pacing.

The political plot is almost entirely realised through lingering scenes of conversation, mostly between Amidala and the manipulative Senator Palpatine (Ian McDiarmid), who moonlights as the shady Lord Sidious to play both sides against each other. He convinces the Queen to make a vote of no confidence in Chancellor Valorum (Terence Stamp) on the basis that he is being manipulated by bureaucrats. That's all well and good, but what eight-year-old kid wants to sit through that?

What an eight-year-old kid does want to sit through is an adventure involving magic space knights endeavouring to free a child slave by having him win a race with super-fast vehicles that sound like exploding Formula 1 cars. Hell, everybody wants to sit through that, except that the child slave himself is intolerable and the magic space knights don't really do much besides cheat at dice throws and lie a lot to keep on top of the situation. When the race comes, well... racing is all about control as we know, and Qui-Gon's advice to young Anakin is to rely purely on his instincts because the mystical power known as The Force will guide him.

You see, everything in this film is about control and manipulation, and not in a "find your own destiny" kind of way either. No, this is more along the lines of "allow yourself to be controlled, but make sure you're being controlled by the right forces." The Jedi constantly put their trust into an unseen power that guides them, but they also strive at all times to master their own emotions. It's an interesting contradiction of giving yourself up to instinct and maintaining self-control at all times, and the reason Qui-Gon latches onto the kid is because he feels the Force needs him to bring balance. Whether he will is left ambiguous, but what is made clear is that in this world of manipulation, guiding forces and self-control, there will always need to be an ultimate power. The sequel hook here being that we don't know who that will turn out to be (unless you're from the future and saw the fourth film first or something), the deliberately enigmatic Palpatine or the uncertain, chaotic figure of the young boy Skywalker. 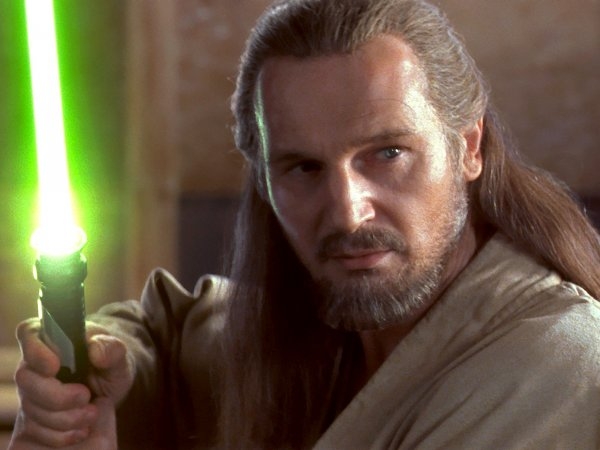 Yeah, this guy again. He's getting a lot of work lately.

It all sounds like a perfectly succinct way to start a franchise, doesn't it? And it is so keenly focused on its central themes that it could almost be. The only problem is that when they actually sat down to write the screenplay, they filled it with irritating characters, ineffective comic relief, racist caricatures and long, boring conversations about politics. Every scene just hangs in the air and ends abruptly. Even seemingly urgent scenes lack any kind of real movement. People are often told to follow another character to a destination; upon hearing the instruction, they all just stand there until a transition takes us to the next scene. Conversations often cut off right when someone was starting the sentiment "We cannot allow that to happen...." Why not? We'll never find out why not because that was the end of the scene.

All the awkward dialogue and motionless direction isn't doing this cast any favours, either. Neeson and McGregor lack the conviction needed to sell these fantastical elements, presumably because they don't fully understand what they're talking about. That's bad direction, not bad acting. Even beloved character actors like Hugh Quarshie, Terence Stamp, Samuel L. Jackson and even Ralph Brown get nothing to do besides provide a presence in a scene. Brown in particular, as the group's crack pilot, barely interacts with anyone and then is suddenly in charge of a fleet of space-craft in the third act. I was pretty sure he even died and then reappeared later on. This is the same Ralph Brown from Withnail & I, Alien3 and The Boat that Rocked? What happened?

The only actor who comes out of this particularly well is Natalie Portman, who essentially plays dual roles because the Queen spends a great deal of time disguised as her own handmaiden while a lookalike (Keira Knightley, believe it or not) takes her place. She does crazy things with different accents and contradictory emotions that bring some much-needed strangeness to the proceedings.

All pretense of originality aside, as a 3-D re-release, The Phantom Menace does little to justify its existence. The 3-D is unobtrusive and barely noticeable. Given Lucas' penchant for revisionism, I'm surprised he wasted the opportunity to throw a bunch of shit at the audience here, and, frankly, I'm a little disappointed in him. It's bad enough that his unskilled hands made something that could have been interesting into something so desperately mind-numbing the first time around, without him giving us a shamefully pointless re-release as well.

MINORITY REPORTS: I've always thought Phantom Menace was the least terrible of the prequels just by virtue of being almost completely detached from the original trilogy, which is sort of like saying Matrix Revolutions is my favorite Matrix movie because it has fuck-all to do with The Matrix. - Joseph "Jay Dub" Wade

The Phantom Menace was a hell of a shitshow, rightfully getting the shit kicked out of it in every corner of the Internet, but let's be honest: The original trilogy, divorced from nostalgia and evaluated honestly, isn't very good either. I hope they keep pumping these re-releases to theaters in the hopes that critical attitudes toward the original trilogy will finally come around and reveal the truth: Neither Star Wars, The Empire Strikes Back nor Return of the Jedi holds a candle to the best films of 2011. Please, Internet, stop acting like George Lucas is shitting on his masterpiece every time he revises the movies via CGI: He's merely applying wax to a statute that was kinda shapeless and lumpy from the start. By the way, Greedo shot first. - Sean "Keanu Grieves" Hanson