The Social Network; Buried; Let Me In

Buried: It's Okay to Laugh

EXPECTATIONS: Buried piqued my interest some time ago when early buzz and rumours started flying around about its unique nature and the casting of Ryan Reynolds in the lead. Even if it turns out to be incredibly dull, which it has a very good chance of being, it will forever remain an interesting experiment and a powerful test for Ryan Reynolds' acting abilities.

REALITY: Let's play out a hypothetical situation. You are trapped in a coffin and buried in the Iraqi desert, what do you do? No, you can't punch your way out like in Kill Bill. Okay, I'll make it easier for you, there's a mobile phone in the coffin with you and you can get a faint signal. So you make some phone calls, right? Right. Then what? Then nothing, you're probably going to die. That's what this film is, an exploration into the harsh reality of an increasingly hopeless situation in which an innocent man is repeatedly punished for absolutely no reason and nobody gives a shit. Bleak, grim, morbid, hilarious... wait ... hilarious? Yes, that's right; Buried deals with its potentially depressing subject matter by playing it for laughs. You were expecting a horror film? Well, instead you're getting a satirical comedy that is so dark and unforgiving that you'll spend a lot of time wondering if you're allowed to laugh.

The film starts with Paul Conroy (Ryan Reynolds) waking up in a small, dark coffin where he spends the rest of the film having panic attacks, writing down phone numbers and having conversations with people who couldn't care less about his situation. That's the plot synopsis out of the way, so let's move on to what everybody is talking about. Let's talk about Ryan Reynolds' performance. I've always been a fan of Reynolds, defending him when others wouldn't. I've always felt he had a natural talent for comedy that elevates his roles into generally being more memorable than they have any right to be. In 2005's The Amityville Horror, we really saw how Reynolds' knack for comedy could bring an interesting edge to what would otherwise have been a lacklustre horror remake. With this in mind, casting him in Buried was an absolutely inspired move.

Reynolds is required to carry the entire film on his shoulders for ninety minutes, interacting only with the voices on his telephone (which include Stephen Tobolowsky and Samantha Mathis as Conroy's boss and wife, respectively), and these phone conversations are what make up the majority of the film's running time. What we are seeing here is a character reaching out in desperation to his family, his employers, the American government, anyone who will listen. He is put on hold, passed around and generally ignored and fobbed off at almost every turn until the only person he can trust anymore is his kidnapper (José Luis García Pérez), who is clearly operating outside of his abilities. This is handled so effectively in the script and in the performance that you never really stop to question it, though Buried does get a little heavy-handed with its point at times. 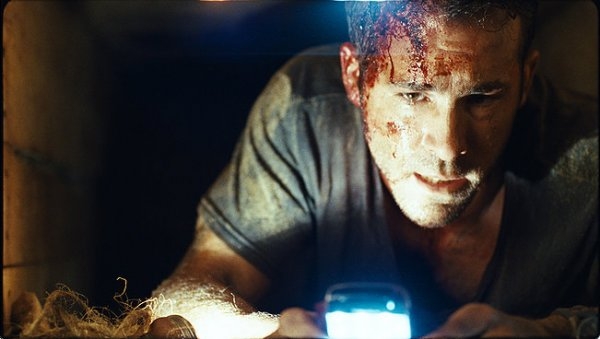 There's not much variety in visuals to show you on this one, so here's a shot of Ryan Reynolds in a coffin using his phone.

Key among the omnipresent phone voices is Dan Brenner (Robert Paterson), a man whose job is specifically to find American hostages in Iraq. It soon becomes apparent that his real role is to comfort people for whom there is no hope, especially when American military resources are stretched so thin as it is. It's here that everything gets a little overly blunt, with Conroy's realisation of Brenner's lack of ability or particular inclination to help him being beaten into the audience at every opportunity. It's a shame, then, that the ending serves only to reinforce this one last time, in such a contrived manner that it leaves a foul taste in the mouth after the brilliant emotional climax that precedes it.

An interesting stylistic choice that keeps the film from becoming visually stagnant involves a lot of trickery in the dimensions of the coffin. There are so many angles and set-ups inside this tiny box that you completely forget about the camera being a physical object in itself. There are times when the camera leaves the confines of the coffin, or feels like it should, but the coffin walls continue on as the camera pans away. At one point, it even looks like Reynolds could comfortably stand up in there. It's interesting to see how they work with the space for the purposes of photography and I'm glad that they were able to trust their audience to accept inconsistencies in the dimensions and light-sources of the confined box.

The turning point of the film comes when Conroy is awakened by a snake in his trousers. Innuendo aside, this is a surprisingly effective scene. In this situation, Conroy puts himself in immediate danger rather than risk being bitten by the snake. The concept of hope rising even in hopeless situations is what makes the film compelling for the entire running time, and this scene punctuates it excellently. It also breaks up the film's lengthy dialogue-heavy scenes to introduce some immediate tension.

This is something else that the film does effectively. New elements are introduced to keep the tension rising, and plenty of reprieves are given to the audience to break up the talking. If I had to compare Buried to another film (and at risk of sounding hyperbolic), I would say it resembles Dr. Strangelove, with its blend of tense thrills, biting satire and a morbid sense of humour. Even in its use of long phone conversations that resolve nothing and go nowhere, the Dr. Strangelove comparison remains very apt. In both films, we know that things will not end well, we know that certain characters will do nothing to help and we know that the only sure thing is that people die so we may as well laugh about it while we still can.

So there still remains the interesting question: Is it okay to laugh? Thankfully, the audience I saw this with thought so - which meant I didn't feel like such a morbid bastard for having a chuckle - and the fact that the writer, director and star even dared to think so is as much of a miracle as the fact that they pulled it off.

MINORITY REPORT: Is this like Saw? Does he have some kind of task to complete before he is violently killed? That sounds sick! I am definitely watching this...

Why is nothing happening? - most people